We use cookies to provide you with a better experience. By continuing to browse the site you are agreeing to our use of cookies in accordance with our Cookie Policy.
Home » Plant-based foods gaining mainstream steam

NEW YORK — Plant-based food is a focus of product development at the nation’s largest supermarket chain. The Kroger Co., Cincinnati, plans to launch a variety of vegan offerings from its Simple Truth brand this year, said Ann Beaty, director of Kroger Merchandising Consulting at 84.51°, the company’s data analytics division.

“Our Simple Truth brand is a massive brand for us,” Ms. Beaty said during a June 24 panel discussion at the Summer Fancy Food Show in New York. “We have been developing some plant-based items, and you’ll see a lot more coming this year.”

“This is not limited to just the vegetarian section or the meatless section,” Ms. Beaty said. “We’re now seeing it pop up in almost every department in the store, and what we’re putting out on the shelves people are definitely responding to. Customers are very engaged with the products, they’re trying them, they’re excited to try them, and they’re coming back and purchasing them again.”

Plant-based food sales in retail grew 20% year over year to $3.3 billion in 2018, while retail sales of all food grew 2%, according to Nielsen data.

“Plant-based foods aren’t new, but what’s happening now is it’s gone from being a niche industry targeting mostly vegetarians and vegans ... but now it’s grown into a mainstream industry that is targeting everyone.” — Michele Simon, Plant Based Foods Association

“You just can’t get that kind of growth from any other category in the supermarket,” said Michele Simon, founder and executive director of the Plant Based Foods Association.

The plant-based boom has stoked the appetite of the investment community. Plant-based food and beverage start-ups have raised more than $17 billion in funding since 2009, Ms. Simon said.

“Plant-based foods aren’t new, but what’s happening now is it’s gone from being a niche industry targeting mostly vegetarians and vegans, who are still an important part of the market segment, but now it’s grown into a mainstream industry that is targeting everyone, and that’s really what’s causing it to explode, combined with the innovation that’s happening,” Ms. Simon said.

The proliferation of plant-based products in the marketplace poses a risk of label confusion and unsubstantiated claims, said Nova Sayers, senior manager of business development in the sustainability division at NSF International, a not-for-profit public health and safety organization.

NSF International partnered with the Plant Based Foods Association last year to establish standards and a verification process for a Certified Plant Based stamp for meat, poultry and seafood alternatives, egg substitutes, and dairy alternatives such as plant-based milk, cheese, yogurt, butter and ice cream.

“Our surveys indicate that consumers recognize that independent verification instead of a self-declared claim, and there’s a lot of trust in that,” Ms. Sayers said. “You can look at the success of non-G.M.O. or gluten-free claims or organic claims, for example, which have helped products with those attributes across all categories sell better.”

A vegan claim may discourage consumers from buying a product if they don’t identify as such, she added.

“We chose the claim and name and language very specifically to accentuate the positive, what’s in the product, to be able to invite a broad audience of people who are trying to shift their diets to more plant-based foods and not necessarily identifying with eliminating all animal products entirely,” Ms. Sayers said. 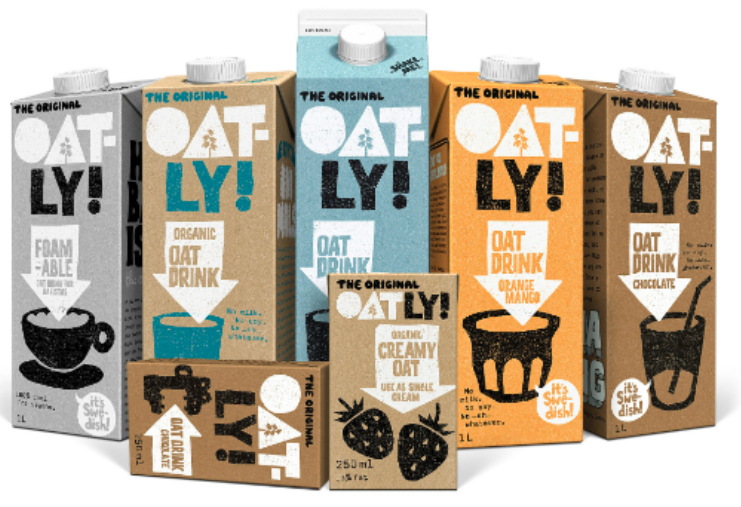 An early adopter of the plant-based certification is Oatly, a Swedish oatmilk company that debuted in the United States in 2016.

“For our entire first year we focused solely on specialty coffee shops,” said Mike Messersmith, general manager for Oatly in North America. “We developed a product that had the right flavor profile and foamed well, and more and more cafes were getting people coming in wanting a plant-based latte or cappuccino.”

In a category dominated by soymilk and almondmilk, oatmilk was unfamiliar to consumers until recently, Mr. Messersmith said.

“Before we jumped into what would be the standard brand launch playbook of retail demos and sampling team, discounts, etc., … we tried to think creatively about our go-to-market strategy,” he said. “So, as opposed to me, an Oatly employee with an Oatly t-shirt, telling you I have the greatest product ever, you as a consumer are going to be much more inclined to believe a cool barista with a sleeve tattoo whom you see every day saying, ‘Hey, we just got this oatmilk in. A lot of people are liking it. Do you want to try it?’”

Many mainstream restaurant and coffee chains have added plant-based products to the menu that mimic meat, milk or eggs, providing opportunities for consumers to taste products they may not know how to prepare properly at home.

“We view those on-premise consumption occasions — restaurants, cafes, colleges and universities — as those leading indicators of where the market is going,” Mr. Messersmith said. “We feel like it’s not only possible but will happen that there will come a day that you walk into a coffee shop and have to specify that you want a cow’s milk latte. We firmly believe that will happen… The assumption will shift that you want a plant-based one. And that isn’t like 50 years away. I think that’s 10 years away, or less.”