We use cookies to provide you with a better experience. By continuing to browse the site you are agreeing to our use of cookies in accordance with our Cookie Policy.
Home » Grubhub details top delivery trends for 2019

The report draws on data from more than half a million orders placed on an average day through Grubhub’s delivery platform. It tracks the most popular food items ordered for delivery and forecasts upcoming trends for the remainder of the year.

In 2018, healthier items like peanut butter acai bowls and detox juices dominated breakfast. This year, sweet and salty combinations top the list. Chicken and waffles, sausage, egg and cheese biscuits and pancakes and bacon were among the most popular breakfast items ordered for delivery. 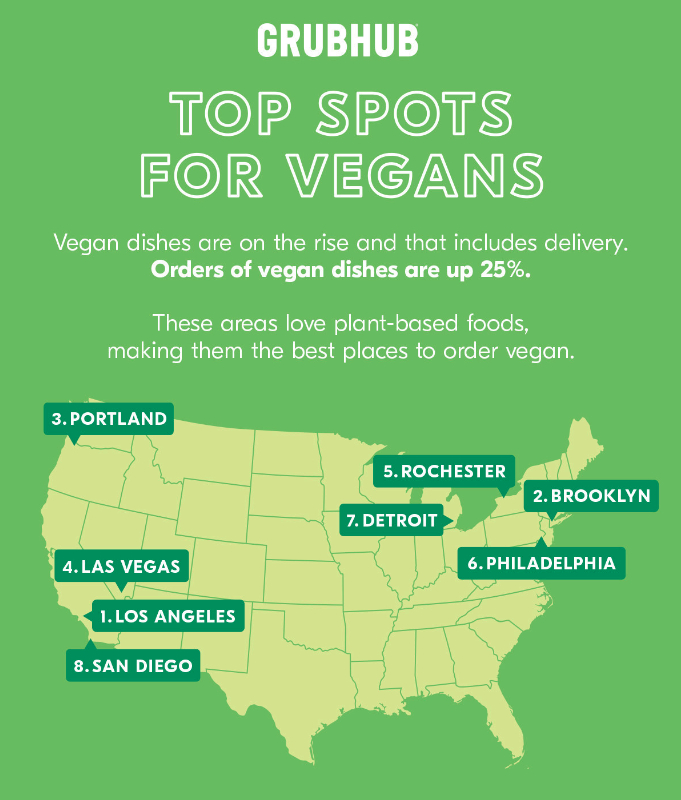 When it comes it late-night orders, vegan options are trending. The Impossible Burger was the No. 1 order for late-night munchies, according to the survey.

Plant-based options are on the rise across America, a trend reflected in the growing number of vegan and plant-based food items ordered through Grubhub. Cauliflower bites, ahi tuna salad, mixed berry acai bowl and quinoa tacos were among the most popular items ordered for delivery this spring, each growing in popularity by double digits, the study noted. While vegan food remained popular in big coastal cities, demand for vegan and vegetarian friendly options also rose in the Midwest, according to the report.

Based on data collected from the first half of the year, Grubhub said it expected barbeque pork buns, truffle Parmesan fries and quinoa and arugula salad to grow in popularity this summer. Pesto pasta, fried okra and lemon grass soup are forecasted to be the most popular items ordered for delivery this fall, according to the report.