KANSAS CITY — Cracker manufacturers are looking to add value in an effort to boost category sales. In one case, innovation is focused on providing nutrients through the addition of vegetables infused into the crackers. In another instance, crackers are being given a “chip-like” texture to appeal to consumers’ snacking tendencies.

Whatever the case, companies are on the lookout for ways to turn around the unit sales slump in the cracker category and kick-start dollar sales growth.

One of the goals at Camden, N.J.-based Campbell Soup Co. is to sustain the momentum in its Pepperidge Farm business, which includes the company’s Goldfish brand.

Speaking to investors during the company’s June 13 Investor Day in Camden, Carlos Abrams-Rivera, senior vice-president and president of Campbell Snacks, said Pepperidge is looking to renovate its core, bring new packaging formats to stores, uncover new ways to inspire children to play with Goldfish and extend into areas outside the core demographic. 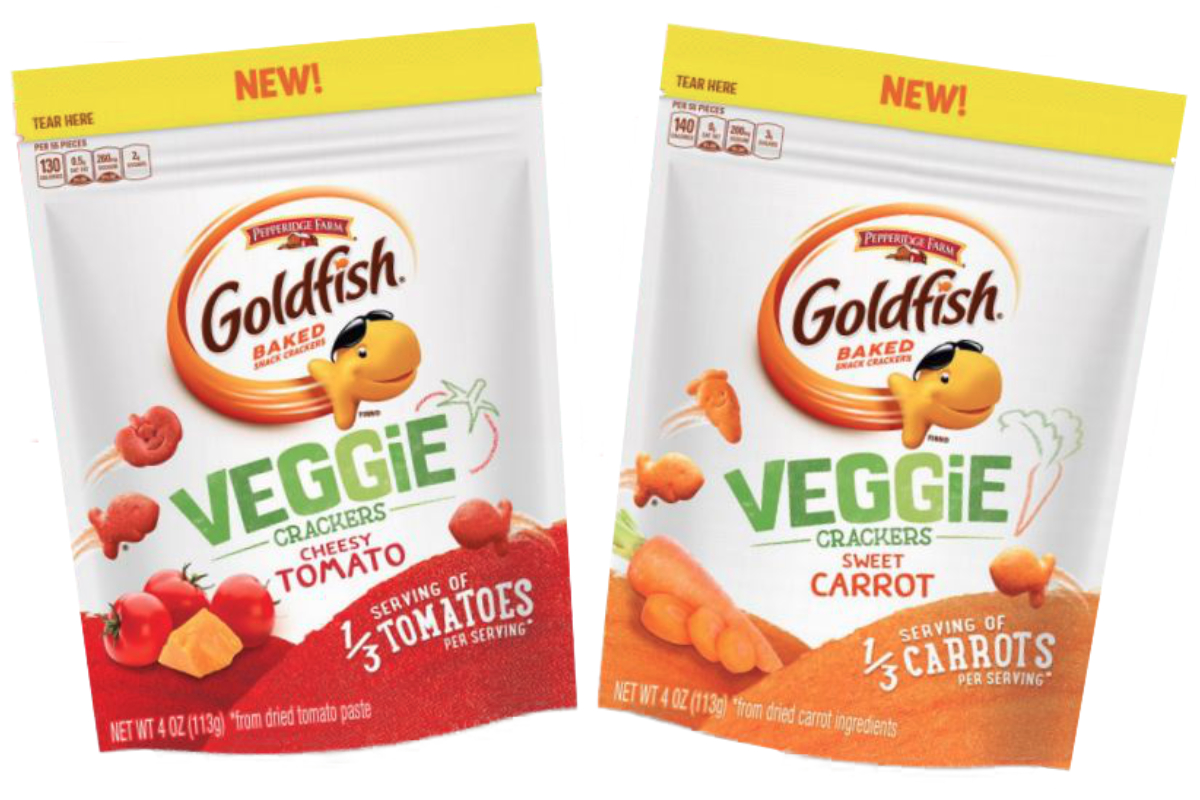 To that end, Pepperidge plans to introduce Goldfish Veggie crackers, which will be available in two varieties: Cheesy Tomato and Sweet Carrot. According to packaging renderings, each serving size is expected to contain one-third of a serving of vegetables. This wouldn’t be the first time Pepperidge has looked to infuse Goldfish with vegetables. A decade ago the company introduced Goldfish Garden Cheddar snack crackers, which also contained one-third of a serving of vegetables.

Taking the Goldfish brand beyond its core consumer represents a key objective for Goldfish. Mr. Abrams-Rivera used the company’s recent launch of Epic Crunch Goldfish as an example of what the company has in mind.

“We knew for (a couple of years) now that this was an area of opportunity for us,” he said. “We really have the right capabilities in-house to be able to do it. So one of many things we have done with Snyder’s-Lance is actually bake a tortilla-like product in one of their Snyder’s-Lance bakeries in a way that actually brings something new to the world that we couldn’t do before, with 18 grams of whole grains and actually unique flavors and making sure we actually are attracting that older kid that it continues to be in the Goldfish franchise.”

The Cheez-It brand continues to reap rewards for Kellogg Co., Battle Creek, Mich. Kellogg’s cracker dollar sales totaled $1,497,764,873 in the 52 weeks ended June 16, up 1.1% from the same period a year ago, according to I.R.I. The overall category gains were boosted in large part to the strength of the base Cheez-It brand, which posted year-over-year dollar sales growth of 3.3%, increasing to $821,716,577.

Kellogg also experienced growth in some of Cheez-It’s varietal options, including Cheez-It Grooves, which grew 3.4% to $96,821,569, and Cheez-It Duoz, which increased 7% to $76,777,361. Kellogg will look to continue its success in Cheez-It with the recent launch of Snap’d, which are thin and crispy cheese crackers. The crackers are available in four varieties: double cheese, cheddar sour cream and onion, white cheddar and bacon, and jalapeño jack.

In a May 2 conference call with financial analysts, Steven A. Cahillane, chairman, chief executive officer and president of Kellogg, said the Snap’d line “is off to a good start.”

Mondelez International, Inc., Deerfield, Ill., is the category’s largest player, with dollar sales of $1,621,430,431, according to I.R.I. The company’s grip on the top spot loosened a bit in the most recent 52 weeks, though, as dollar sales fell 0.6%. A key factor in the decline was a noticeable drop in the company’s biggest brand: Nabisco Ritz. According to I.R.I., dollar sales of Ritz crackers fell 6.3% while unit sales dipped 8.7% in the 52 weeks ended June 16. Nabisco Wheat Thins also struggled during the period, as dollar and unit sales fell 3% and 6%, respectively.

Mondelez has been mostly quiet in recent conference calls regarding its cracker business. The company did have one product land on I.R.I.’s Top 10 New Product Pacesetters list earlier this year, though. Ritz Crisp & Thins, which debuted late in 2017, generated $49.1 million in year-one sales, according to I.R.I., placing it No. 9 on the annual list. The Crisp & Thins are available in four varieties: sea salt, cream cheese and onion, bacon, and salt and vinegar. According to Mondelez, the crackers combine potatoes and wheat, rolled thin and oven baked for extra airiness and crunch, with 50% less fat than many regular fried potato chips.

Mondelez also took a minority stake in Hu Products and Hu Kitchen, New York, earlier this year. Hu’s portfolio includes Hu grain-free, gluten-free crackers that are available in sea salt, everything and pizza flavors. The crackers have been sold exclusively online and at Hu Kitchen restaurants in New York City but are expected to move into retail channels later this year.