We use cookies to provide you with a better experience. By continuing to browse the site you are agreeing to our use of cookies in accordance with our Cookie Policy.
Skip To Content
Home » Beyond Meat c.e.o. sees ‘endless’ sources of plant protein

EL SEGUNDO, CALIF. — The Beyond Burger is just the beginning.

“I think if you look ahead five years from now, you’ll see sausage from us that has different proteins,” Ethan Brown, founder, president and chief executive officer of Beyond Meat, Inc., said during a July 29 earnings call. “Maybe one sausage will be offered with a lentil protein, the other with lupin or camelina. You can kind of name your source.

“But when you start to think about the plant kingdom as a source of protein, there’s really just almost an endless number of crops you can pull it from.”

The latest iteration of the Beyond Burger, which is described as having a “meatier” flavor and mouthfeel, contains peas, mung beans and brown rice. Mr. Brown said the combination of amino acids from these sources delivers a high quality of protein to the human body.

“If you look at our latest breakfast sausage, it actually has more protein in it ounce per ounce than its animal protein equivalent,” he said.

“That’s really the way to do this,” Mr. Brown said. “You get a lot of benefits not only in supply chain, but you get consumer satisfaction with that in terms of having a more diverse supply of protein.”

“On the ingredient deck itself, I think it’s vital,” he said. “This gets back to understanding your consumer, the relationship with the consumer. It comes back to our own families. My own family eats a lot of our products. What does mom feel comfortable serving her children? And I think you complicate the message by including things like genetic modification, artificial ingredients, soy that has questions around its origin and what’s in it.

Improvements to the recipe have helped create a product that tastes, looks and cooks more like beef. But the plant-based patty isn’t perfect yet, Mr. Brown said.

“I think it’s quite a bit further in the direction of our true north, which is animal protein, and at the same time, acknowledge we have miles to travel,” he said. “I’d say it’s maybe 75% of the way there, and how hard that 25% is. It is going to be harder. But at the same time, we are really, really building a tremendous database and set of expertise that I think is unparalleled around how to use all-natural ingredients from plants and from the plant kingdom globally to construct meat directly from plants.

“And so, while that last 25% stretch or 30% stretch, wherever you want to put it at, will be more difficult, we also have tools and expertise and capabilities that are giving us, I think, a lot of enthusiasm for closing that final stretch.” 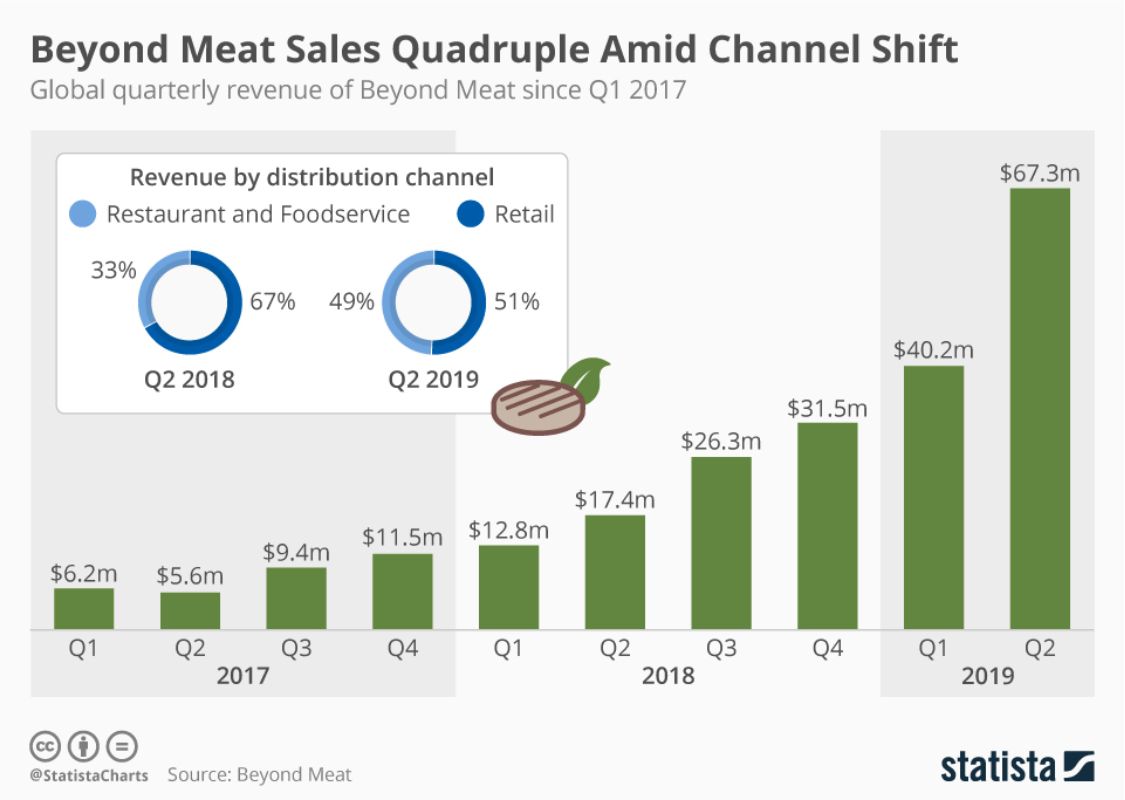 For the second quarter ended June 29, Beyond Meat posted a loss of $9.4 million, which compared with a loss of $7.4 million in the prior-year period. The widened loss was due to an $11.7 million non-cash expense related to the remeasurement of preferred and common stock warrant liabilities in conjunction with the company’s initial public offering in May.

Adjusted EBITDA was $6.9 million, which compared with an adjusted loss before interest, taxes, depreciation and amortization of $5.6 million the year before. The improved result was driven by strong revenue growth and gross margin expansion.

“This strong start gives us confidence in our net revenues expectation for the year, which we now expect to exceed $240 million in 2019, representing a year-over-year growth rate in excess of 170% compared to 2018,” said Mark J. Nelson, chief financial officer at Beyond Meat.

Retail net revenues during the quarter increased 192% while restaurant and food service net revenues advanced 483% versus the second quarter of 2018, Mr. Nelson added.

The Beyond Burger is available in approximately 27,000 retail locations and 26,000 food service locations, Mr. Brown said.

“If you look at SPINS data, for example, for the burger, we’re up 177% in units over the second quarter a year ago, up 181% in dollars in the second quarter over a year ago,” he said. “Our velocity, and this one is amazing to me, our velocity is up 140% over a year ago for the burger according to SPINS data. So, much of this growth is being driven by volume both in terms of the number of points of distribution, but also in that increased velocity.”

Additionally, Beyond Meat announced a proposed secondary public offering. The company said existing shareholders will sell 3 million common stock shares, plus it will sell 250,000 more shares to invest in building out production capabilities and marketing.