We use cookies to provide you with a better experience. By continuing to browse the site you are agreeing to our use of cookies in accordance with our Cookie Policy.
Skip To Content
Home » Organic hard red winter wheat, soybean prices lower in period

KANSAS CITY — The average price for organic food-grade hard red winter wheat in May-June declined sharply from the prior two-month period while other wheat classes were unquoted, according to Mercaris, the organic and non-G.M.O. trading platform and market information company. Organic food-grade soybean prices also were lower in the latest period while corn was unquoted.

Meanwhile, in a special July report on the impact of cool, wet spring weather and flooding on planting of organic crops, Mercaris found limited impact from flooding but broader impact from ample precipitation. In a survey of organic farmers, Mercaris found that 56% of respondents indicated that planting decisions were changed by weather this year, and that 29% intended to file for a Prevented Planting insurance provision with the U.S. Department of Agriculture’s Risk Management Agency on at least part of their certified organic acreage this year.

Much of the U.S. organic crop production is concentrated around the Great Lakes region (in part serving organic dairy operations), which was not significantly affected by flooding.

“The survey found that many farmers chose to plant soybeans this year, following a reduction in the number of planted organic corn acres, with 100% of farmers who adjusted their planting decisions planting soybeans,” Mercaris said concerning survey results. “In general, organic farmers are expected to be more reliant on summer cover crops compared to conventional farmers, limiting the overall loss of total planted organic acreage, but with a likely reduction in cash crops planted. Across the Midwest, summer cover crops will be vital this year to compensate for significant organic winter wheat and organic winter alfalfa production losses.

“All factors considered, it appears there will be a measurable loss of the total number of planted organic corn and soybean acres following Prevented Planting insurance claims.” 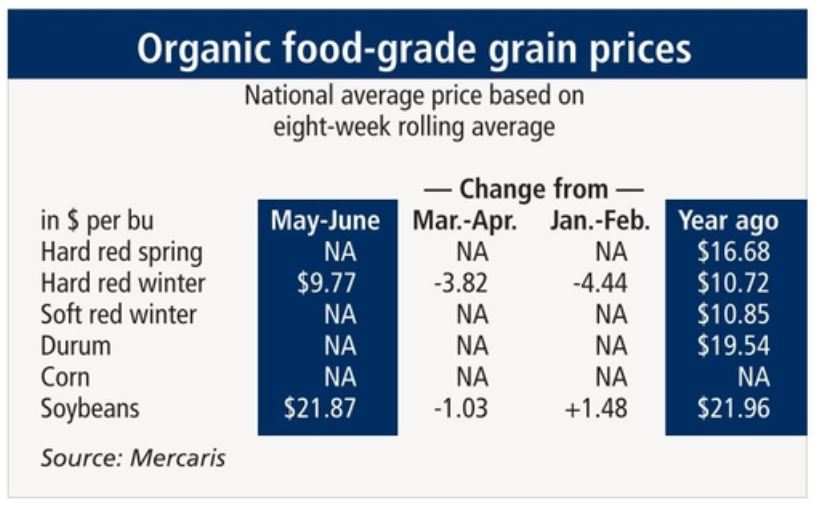 Mercaris noted that “there are still numerous undetermined market risks” until harvest.

“With planting and growing conditions already delaying the development of this year’s crop, reaching anything beyond average yields this year is very unlikely,” Mercaris said.

In its July Market Update, Mercaris noted that the market appears to have “taken stock” in weather-related shifts in planted area and has been building potential changes in production into pricing since May. For example, delivered prices for organic soybeans have declined since June, “despite year-over-year increases in demand.”

Mercaris also noted slight shifts in organic corn imports, as well as in organic livestock, poultry and milk production, with the latter declining since the first quarter of 2018.

“Once again, the organic sector is proving to be extremely complex,” said Ryan Koory, director of economics at Mercaris. “The lack of consistent long-term trends makes the quality and timeliness of the data and insights even more vital for organic and non-G.M.O. farmers and buyers to make informed business decisions.”

In other organic matters, the U.S. House Agriculture Committee Subcommittee on Biotechnology, Horticulture and Research held a hearing July 17 assessing the effectiveness of the U.S. Department of Agriculture’s National Organic Program.

“Like other sectors that have seen explosive growth, the organic industry’s expansion has not been without challenges,” said subcommittee chair Stacey Plaskett in opening remarks, noting that the “power of the organic seal is in its integrity.” The seal may be used on products that meet U.S.D.A. organic program standards.

“Just in recent months, we’ve seen this integrity challenged, with reports of fraudulent organic products being imported domestically,” Ms. Plaskett said. “With these reports came consumer confusion, and a risk to the reputations of domestic organic supply chains.”

Those incidents highlight the need for expanded authorities for enforcement, increased resources, more staffing and stronger data collection to protect the organic program’s integrity and result consumer trust, she said.