We use cookies to provide you with a better experience. By continuing to browse the site you are agreeing to our use of cookies in accordance with our Cookie Policy.
Home » Slideshow: International ice cream formulations diversifying U.S. freezers

CHICAGO — You scream. I scream. The entire world screams for ice cream. Indeed, ice cream is a food enjoyed around the globe, with many countries having their own unique spin. Those international recipes are the inspiration behind a growing number of specialty ice cream cafes in large metropolitan areas, such as New York City. The concepts are also increasingly being made into pints and novelties for at-home consumption.

While America is known as the founder of modern-day industrial ice cream manufacturing, and also the leader in premium flavor innovation — think Ben & Jerry’s and Haagen-Dazs — it’s the authentic international recipes from around the world that are garnering the attention of ice cream aficionados in the United States. Ice cream marketers are taking note, as they are exploring all avenues to keep Americans eating ice cream.

Gelato is probably the most well-known concept. Authentic gelato is made in small batches for on-the-go consumption. The base product is simple: milk, cream, sweetener and sometimes pasteurized eggs. The gelato maker then blends in fruit, chocolate, nuts or other sweet treats. The beauty of the small batch is the gelato maker can be creative with flavoring ingredients. This keeps the consumer interested and coming back for more.

There is no standard of identity for gelato in the United States, which provides room for creativity. Many consumers consider gelato a premium product, an indulgence. It is a frozen dessert they will pay a little more for because of the story behind the product. Here is a bonus: the churning process that is void of overrun results in a rich, creamy, dense product that contains less fat than traditional ice cream.

Helados is the Spanish word for ice cream. Most helados in the United States is made at mom and pop shops and sold as a stick novelty from push carts and kiosks in urban areas.

Dondurma means ice cream in Turkish. The product tends to be low in fat and dense in structure. It has a slightly stretchy, chewy texture that does not melt quickly in the mouth. This helps the consumer savor the flavors a bit longer. Dondurma is known as kaimaki in Greece and as booza in the Arab world.

Asian countries have a history of using non-cone edible holders to carry a scoop or two. One such carrier is a chewy crepe. Another is the taiyaki, which is a Japanese fish-shaped cake. 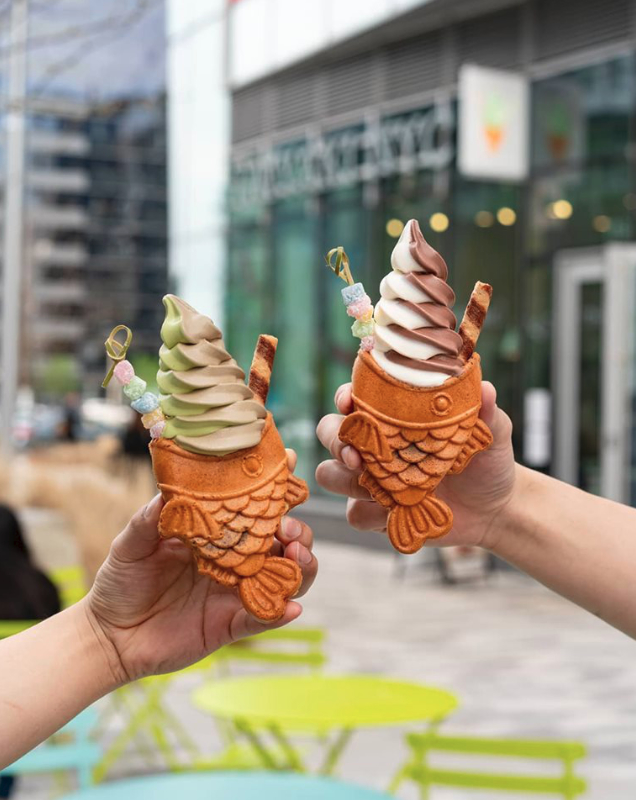 Taiyaki N.Y.C., with a number of cafes in the New York City metro area as well as Boston, Miami and Toronto, is known for its inventive ice cream flavors served in a fish-shaped waffle cone. The cone gets filled with either red bean paste or custard, then topped with ice cream and garnishes. While chocolate, strawberry and vanilla ice cream, as well as rainbow sprinkles, chopped nuts and cookie crumbles are available, guests tend to favor the more traditional flavor combinations, such as matcha green tea ice cream with mochi crumbles or rice cracker pearls.

Japanese mochi is growing in popularity, with numerous brands now available in mainstream supermarkets. Mochi is best described as ice cream balls wrapped in sweetened, soft and chewy rice dough. They are sold retail in multi-packs as well as self-service freezer cases.

“Mochi ice cream is a mainstay in the novelty dessert category and fans have become increasingly interested in fun and unique flavors to try beyond our classic favorites,” said Rick Schaffer, chief executive officer of Bubbies Homemade Ice Cream & Desserts, Phoenix. “We are always looking for different, innovative flavors and ways to develop these flavors.”

The company currently offers more than 25 flavors. To generate excitement, Bubbies recently partnered with six culinary professionals to create decadent new flavors and is now leaving it up to the public to decide the next new flavor to launch. The six aspiring mochi flavors are: berry basil, churro, maple walnut, peaches and cream, peanut butter and jelly, and pomegranate açaí. Some of the company’s most popular mochi flavors include: blood orange, green tea, lychee, mango and red velvet.