We use cookies to provide you with a better experience. By continuing to browse the site you are agreeing to our use of cookies in accordance with our Cookie Policy.
Home » Consumers focusing on wellness, balance

ASHEVILLE, N.C. — Consumer focus is changing from dieting and moderation to wellness and balance, while “sugar” remains a concern, but maybe not in the way many expect, according to a panel at the 36th annual International Sweetener Symposium held Aug. 6 in Asheville.

Wellness brings consumer focus to inclusion rather than exclusion, which is what dieting focused on, said Amber Wilcox, a consultant with Mintel Consulting, Chicago. From January 2015 to July 2019, consumer sentiment has shifted from dieting (now 67%) to wellness (now 90%), she said. The wellness trend shows a shift from restriction to a lifestyle.

“Consumers are being bombarded with wellness,” Ms. Wilcox said.

During roughly the same time period (2014 through 2018), the average sugar content of “sugary” drink launches declined across all regions of the world, most significantly in Latin America, said David Lockwood, director, Mintel Consulting. Meanwhile, sugar per serving in the United States increased from an average of 11.34 grams in 2015 to 11.88 grams in 2018 for the six largest global food and beverage companies, based on all product launches across their 10 largest categories (not just beverage), he said.

Consumers like the idea of wellness, Mr. Lockwood said.

“What they eat is part of who they are,” she noted.

At the same time, consumers don’t necessarily know what “healthy” is, Ms. Wilcox said, even though they feel good about individual aspects of their health, such as 91% saying they eat a well-balanced diet, 91% get enough sleep and 84% exercise. 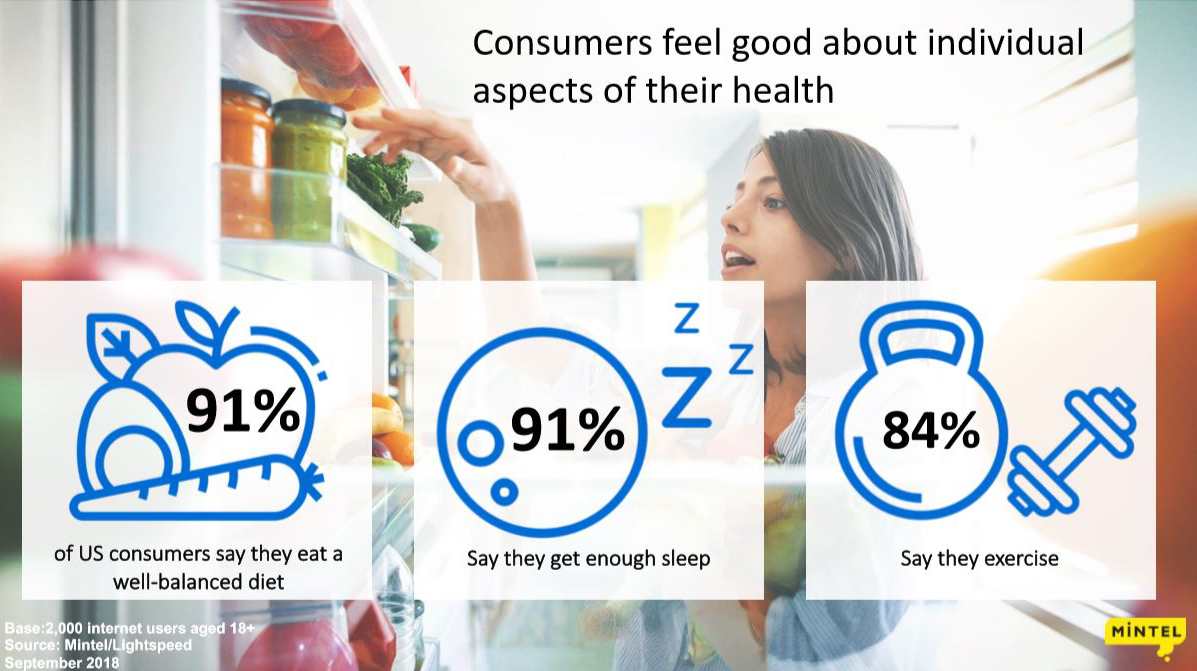 Changes in consumers’ perception about health “changes everything” about how they perceive sugar and how the industry communicates about sugar, Mr. Lockwood said.

Based on a September 2018 survey of 2,000 internet users aged 18 or older, 74% said a healthy diet should be low in sugar, 56% said they were reducing their sugar intake, and 33% said they were limiting the amount of sugar in their diets more than they did a year earlier.

Ms. Wilcox called those “aspirational” numbers, which consumers say when asked in a survey but may not do in actual experience.

Despite survey results, online activities indicate what consumers really think about sugar, which is mostly positive, Ms. Wilcox said. Mintel research showed sugar had an 85% positive online sentiment in July 2019, up 5.7% from January 2016, and a 15% negative sentiment, down 27%. Those positive sentiments were higher than coffee and cats, Ms. Wilcox said, and only modestly below birthday sentiments.

“In the end, it’s all about balance,” Mr. Lockwood said.

“In a world with seemingly ever-changing diet advice, consumers are skeptical and admittedly confused when it comes to food and nutrition,” Mr. Mohamadi said, adding that consumers are somewhat fearful about sugar.

Focus groups have indicated that “sugar” represents any food that is sweet, regardless of the type of sweetener actually used, and that anything sweet falls into a category that can lead to health issues and should be limited, he said.

He agreed with Ms. Wilcox and Mr. Lockwood that “moderation” has a negative connotation that implied restriction. 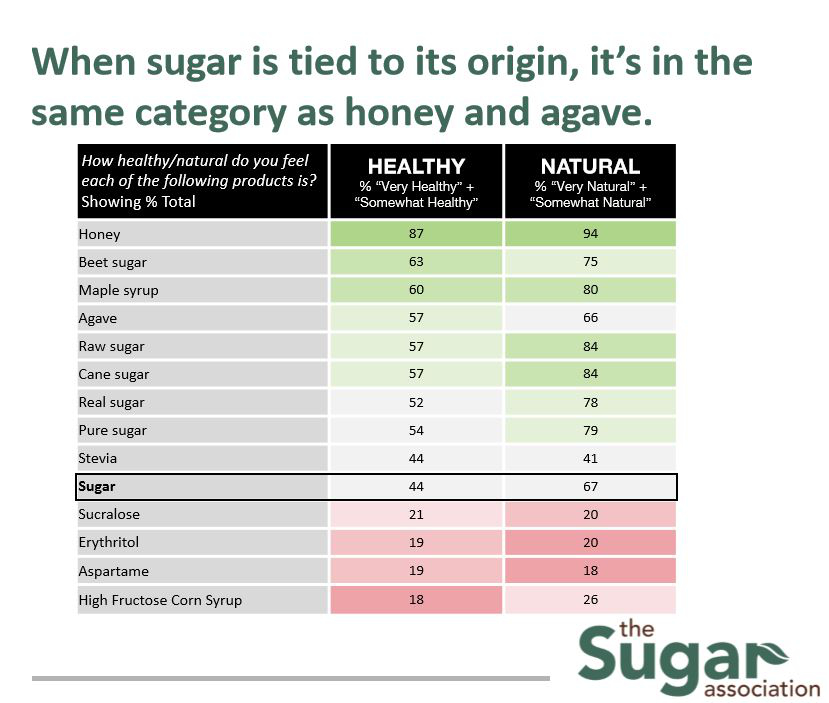 He suggested the sugar industry focus on three messages to consumers: first, simplicity — that sugar is a natural, minimally processed, farm-raised product; second, balance — that sugar can be part of a balanced lifestyle; and, third, utility — that sugar plays a role in the human body as a source of glucose needed for muscle and brain functions and is not just empty calories.

Only 30% of consumers think of sugar as a natural product. Simplicity ties in with consumers’ preference for “less is more,” which is related to natural and healthy.

While the term “sugar” may be a tainted “brand,” Mr. Mohamadi said, use of terms like beet, cane, real and pure with sugar are accurate and truthful, and tie it back to the origin and can build consumer confidence in the product.

Mr. Mohamadi cautioned the sugar industry from leading with defensive messages and from overusing government data and guidelines, of which consumers tend to be skeptical or distrust. Messages about simplicity and balance can come from the sugar industry, he said, but the message on utility needs to come from “experts” such as medical, scientific and academic professionals.

Courtney Gaine, Ph.D., president and chief executive officer of The Sugar Association, who moderated the panel with Ms. Wilcox, Mr. Lockwood and Mr. Mohamadi, noted that the U.S. Dietary Guidelines have recommended avoiding too much sugar since 1980, and that the 2015 Guidelines recommended limiting calories from added sugars to no more than 10% in a 2,000-calorie daily diet. She said calories from added sugars declined from 18.1% in 1999-00 to 12.6% in 2015-16, “within 70 calories of the U.S.D.A. recommendation.”

Mr. Lockwood cited U.S.D.A. data that showed average daily per capita calories increased by 507 calories, or 24%, from 1970 to 2008. Added sugars increased 14%, compared with increases of 38% for grains and 42% for fats and oils. He suggested that 80% of the focus on reducing calories should be on grains and fat and oils.

The Sugar Association is the scientific voice of the U.S. sugar industry, with a goal, in part, of increasing consumer understanding and confidence in the role that sugar plays in a nutrition, balanced and enjoyable diet.

Trends Health and Wellness Sugar
Subscribe to Our Newsletters