We use cookies to provide you with a better experience. By continuing to browse the site you are agreeing to our use of cookies in accordance with our Cookie Policy.
Home » Fermented beverages are having a feel-good moment

Fermented beverages are having a feel-good moment

CHICAGO — Feeling good from the inside out has become a common promotional theme among suppliers of digestive health ingredients, namely probiotic cultures and prebiotic fibers. It is the role nutrition plays in physical health and is also the driver behind the live- and active-culture-containing segment of fermented beverages, which includes kefir and kombucha, as well as drinking vinegars.

The 2019 Food and Health Survey from the International Food Information Council Foundation, Washington, shows that about one-fourth (23%) of all shoppers seek foods for a health benefit. Of that segment, more than half are looking for digestive health benefits.

Data from NMI, Harleysville, Pa., show that nearly two out of five (39%) consumers are trying to manage digestive issues. Interestingly, it is younger millennials (20 to 26 years old) who are on board with digestive health. The young adults are seeking foods that help keep the good bacteria in their gut thriving. They are also the demographic most willing to explore the use of functional beverages for health and wellness.

“This is an example of claims educating consumers on the health benefits of an ingredient and hence, the product itself,” said Greg Paul, marketing leader, DuPont Nutrition & Biosciences, a segment of DuPont, St. Louis. “Fermented beverages with probiotics assist with digestive health.”

Fermented beverages are being embraced by consumers who believe good digestive health influences both body and mind. They appreciate the naturalness of the beverages that have been around forever and consumed for medicinal purposes.

Kefir’s origins date back more than 2,000 years to the nomadic people who occupied the Caucasus mountains located between the Black Sea and the Caspian Sea. They would attach milk-filled leather bags spiked with kefir grains to their horses as they traveled the region. This ensured good mixing and fermentation. 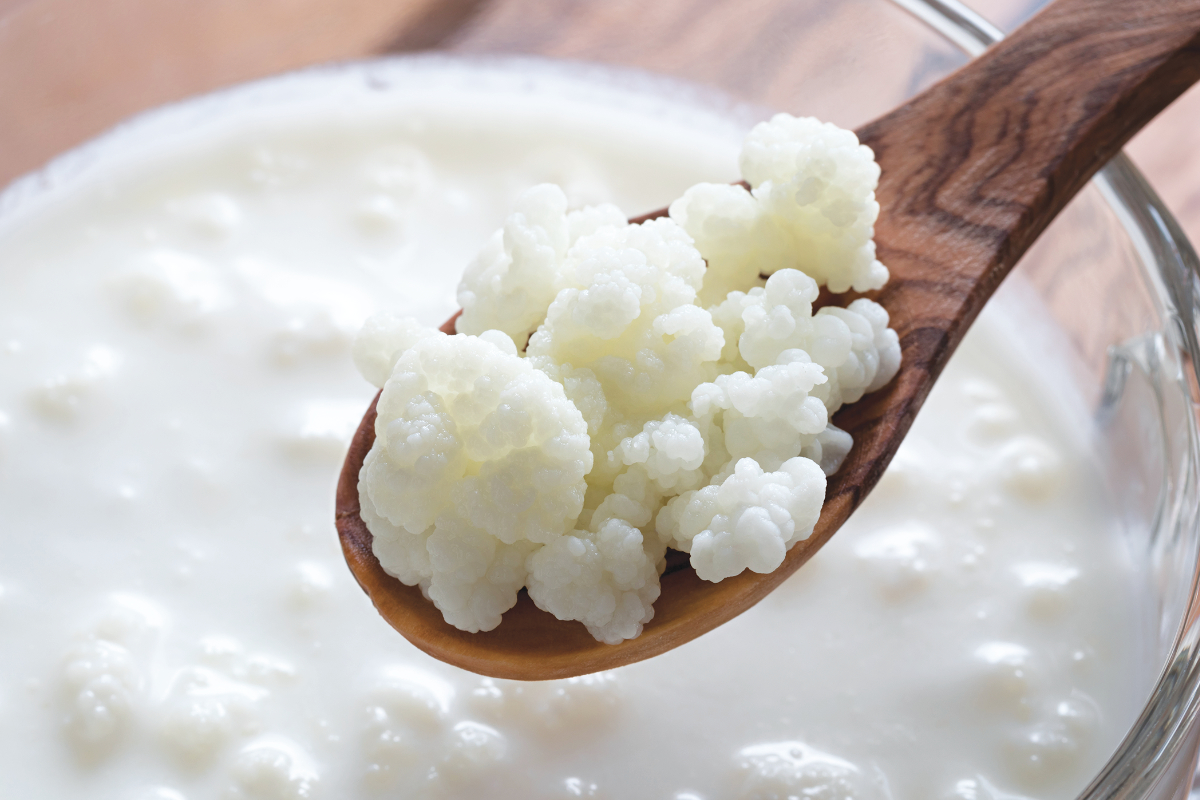 Kefir grains are not cereal grains. They are a colony of yeast and lactic acid bacteria that resemble cauliflower in appearance. Together the microbial cocktail turns the milk’s lactose into lactic acid, while also influencing the flavor and consistency of the fermented beverage.

The name kefir is derived from the Turkish word “keyif,” which means “feeling good.” Thus, kefir has a long history of naturally contributing to inner well-being. Not only do the kefir grains contribute gut-friendly probiotics, after fermentation, the drink is almost completely lactose-free, making it easily digested by those with lactose intolerances or sensitivities.

Lifeway Foods Inc., Morton Grove, Ill., communicates to consumers that its fermentation process and specific kefir cultures ensure that Lifeway Kefir is up to 99% lactose-free. While cow’s milk kefir is the company’s primary business, Lifeway Foods recently entered the plant-based beverage category with Plantiful. Available in both adult and children’s lines, Plantiful is a vegan kefir-style beverage that comes in a variety of flavors. The base is cultured non-G.M.O. pea protein, and the fermented beverage contains no dairy, gluten or soy and is made with organic ingredients.

Plantiful comes in 8-oz single-serve and 24-oz bottles that contain 10 grams of protein and 10 vegan strains of probiotics, providing both functional nutrition and microbiome support. The child-friendly Plantiful pouches are a complementary follow-up to the company’s ProBugs line of kefir pouches, both of which feature a no-spill spout.

Building on the non-dairy business, water kefir, also known as tibicos, is catching on in the ready-to-drink beverage sector. The traditional fermented drink relies on water, sugar, fruit and a “symbiotic culture mixture of bacteria and yeast” referred to as S.C.O.B.Y. The result is a slightly tart, effervescent drink.

Water kefir is typically made as a home-brewed beverage; however, Goodwolf Feeding Co., Portland, Ore., now offers a bottled product. The company said the beverage is made from kefir crystals fermented with organic sugar, figs and pink rock salt. The result is a drink rich in electrolytes, probiotics and enzymes.

The industry can expect more plant-based and vegan fermented beverages as the movement grows. To assist, DuPont recently introduced a portfolio of new cultures specially formulated for such products.

“Before this launch, non-dairy fermented beverages were using dairy cultures,” Mr. Paul said. “The new cultures can be used in broad range of fruit and vegetable bases, including almond, coconut, soy and cereal grains. They are vegan and organic compliant.”

Kombucha is a Chinese fermented tea drink known for its acidic, tart taste. In the past few years, kombucha has gone mainstream, with retailers often stocking multiple brands. Like water kefir, kombucha is made with the microbial cocktail referred to as S.C.O.B.Y. It is slightly effervescent and naturally has a trace of alcohol. It is less than 0.5% alcohol by volume. This is the cut-off line for the U.S. Food and Drug Administration’s distinction between alcohol and non-alcohol. 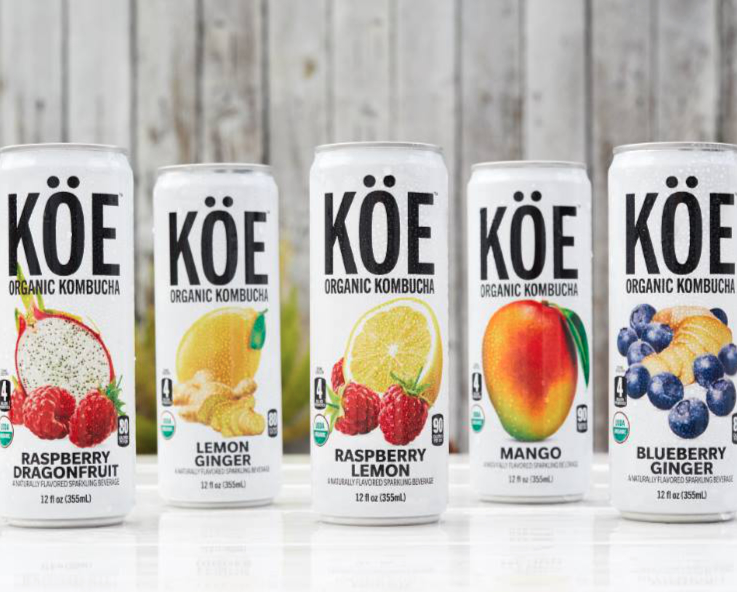 There are many types of kombucha in the market. Some are more traditional and “potent” than others. KÖE, for example, is light, bubbly and full of fruity flavor from the addition of organic fruit purees and juices.

“KÖE was made for the 90% of consumers in America who have never had kombucha,” said Armen Soghomonian, executive vice-president, Stratus Group Beverage, Los Angeles. “We wanted to craft a beverage for the person who wants all the great benefits of traditional kombucha without sacrificing great taste.”

For the “over 21-crowd,” there’s also a growing “hard” or high-alcohol version of kombucha. Brewers modify the manufacturing process to include an extra fermentation step. This includes an additional strain of yeast and extra sugar for the fermentation, which often is extended by a week or two. Some microbrewers are blending kombucha with their signature craft beers to add a twist of healthfulness.

Andrew Clark, brewmaster and one of the three founders of Boochcraft, Chula Vista, Calif., boosts the alcohol content with brewing yeast. He then flavors the fermentations with cold-pressed fruit and vegetable juices, along with some herbs and even chili peppers.

It is not as easy as it sounds, as there are many microorganisms competing to ferment the sugar substrates. The final beverage must have the right amount of sweetness — and sugar content, if carbohydrate concentration is a label claim — and hit the target alcohol content during every microbrew cycle.

Unlike kefir and kombucha, drinking vinegar is not a live and active beverage; however, its acidity is recognized as exerting digestive health benefits. The consumption of vinegar as a medicinal and cosmetic elixir can be traced back thousands of years to the Greeks and Romans. Apple cider vinegar is the most well-known, likely because of its palatable flavor profile, as compared to other vinegars. However, as today’s health- and wellness-seeking consumer embraces better-for-you beverages, other fruit vinegars are being explored, often in combination with other ingredients.

Vinegar is a product of ethanol alcohol fermentation. Bacteria break down the ethanol, producing acetic acid, which gives vinegar its tangy taste. Vinegar may be made from distilled grain alcohol, wine, champagne, beer and cider, or from fruit juice that first gets fermented into alcohol and then taken a step further and converted to acetic acid.

Drinking vinegars, also known as shrubs, are vinegars combined with a sweetener. The resulting syrup may be blended with water — carbonated or still — as well as juice or even spirits. Some beverage manufacturers are doing the blending and bottling product as a ready-to-drink drinking vinegar.

In the adult beverage sector, mixologists are getting creative with drinking vinegars. The trend started a few years ago when there was a shortage of limes, as vinegar provides similar acidity. Mixologists learned vinegars also contribute their own unique flavor profiles, allowing for the development of signature cocktails.

Detroit-based McClary Bros. markets a line of concentrated drinking vinegars in eight varieties, with Michigan apple pie the most popular. Other flavors include beet and carrot, cranberry, fig leaf, lemon and ginger, pineapple and fennel seed, Saskatoon berry and strawberry. The company markets the vinegars as both a healthy mixer for sodas and cocktails, as well as a culinary tool, offering recipes for everything from dressings to marinades to sauces.

Pok Som is a full-strength drinking vinegar, which is a sweet and tart fruit and vinegar-based concentrate manufactured by Pok Pok Som, Portland, Ore. Som Soda is the ready-to-drink version. The drinking vinegar sodas contain no more than seven natural ingredients, which vary by flavor. The ingredients are vinegar, cane sugar, water, citric acid, sea salt and fresh produce. They are sweet and tart and not too heavy on the vinegar, as the beverages are made using the same one-part drinking vinegar to four-parts water mixer formula recommended for the concentrated vinegar.