We use cookies to provide you with a better experience. By continuing to browse the site you are agreeing to our use of cookies in accordance with our Cookie Policy.
Home » Meet Yomee, the ‘Keurig for yogurt’

Meet Yomee, the ‘Keurig for yogurt’

Mr. Jaiswal came up with the idea for Yomee after moving overseas from India, where his mother often made fresh yogurt. He struggled to find a store-bought option that fit his needs. Most of the products available either didn’t keep long or had too much sugar, he said. It didn’t help that his young daughter was a picky eater. He decided to try his hand at making fresh yogurt for his family to enjoy instead. The process, it turned out, was more difficult and time consuming than he anticipated.

“In a traditional yogurt making process, you need to take nine steps to make the yogurt,” Mr. Jaiswal said. “It can take up to a couple of hours of preparation and cleaning up. You need to boil the milk to 185 degrees, and continuously stir it so that it doesn’t swell out of the pan. Then you need to cool it down. You also need to find the right kind of culture to make yogurt. Once you’ve done all of that, it takes anywhere from 10 to 18 hours, depending upon what kind of yogurt you are making, to make the yogurt.”

Yomee simplifies this process into three steps. Users place a pod containing live cultures into the machine, add their choice of milk and press a button. Flavor can be customized by adding sugar, honey, fruits or just about anything else, but Yomee does all the hard work. It heats, cools and stirs the milk before releasing the pod for fermentation. It then incubates the milk for six hours before cooling it down. After that, the yogurt is ready to eat. 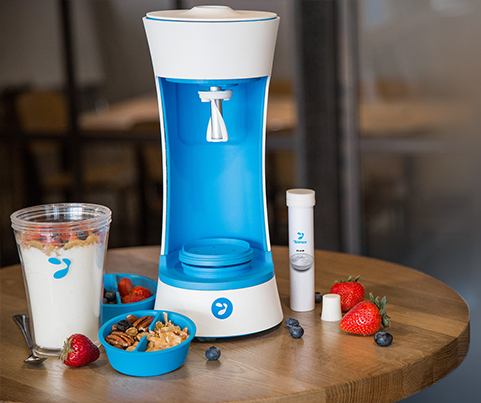 The device has been called a “Keurig for yogurt.” In some ways, the description fits. Yomee functions much like a Keurig or Nespresso coffee maker, and the product design resembles a single-serve coffee machine. Unlike fresh yogurt, however, drip brewing a cup of coffee never took a half a day or longer, Mr. Jaiswal pointed out.

“In this sense, Yomee surpasses what Keurig did to drip coffee machines,” he said. “Now users can have fresh yogurt at home without having to undertake a whole science experiment.”

Mr. Jaiswal started Lecker Labs in 2016. He teamed up with co-founder Tu-Hien Le the next year, and together they raised $325,000 in seed funding. The two were accepted into Food-X, a New York-based accelerator, where they refined the first functioning prototype. Since then, they’ve more than quadrupled their initial Kickstarter goal. Lecker Labs is based in Hong Kong, but the team is dispersed throughout the world. It has chefs and formulators in Canada and New Zealand, I.T. support in Singapore and India, and mass production in Mainland China. Investors are concentrated in the United States.

There are other yogurt makers on the market. Many of them sell for under $30. One thing that sets Yomee apart is its ease of use, Mr. Jaiswal said. Unlike other devices, it requires little supervision. The pods are another differentiator.

“About 400 yogurt makers are sold in North America every year,” Mr. Jaiswal said. “These are actually just yogurt incubators, because they only incubate or ferment the milk. Users still have to find a source of their yogurt seed culture and do all the hard work of heating the milk, maintaining the right temperature, moving the finished yogurt into fridge, etc.”

Yomee pods are made from dextrose and provide a host of friendly bacteria. They completely dissolve when dropped into milk and can be stored in a refrigerator for up to a year, making them essentially waste-free. The pod technology also is open source, meaning other companies can create and market their own branded versions.

“We want to provide uncompromising variety to our customers, and the co-branding model allows us to do exactly that,” Mr. Jaiswal said. “It also allows other companies, like supplement manufacturers, to extend benefits of fresh yogurt to their customers with their ingredients.” 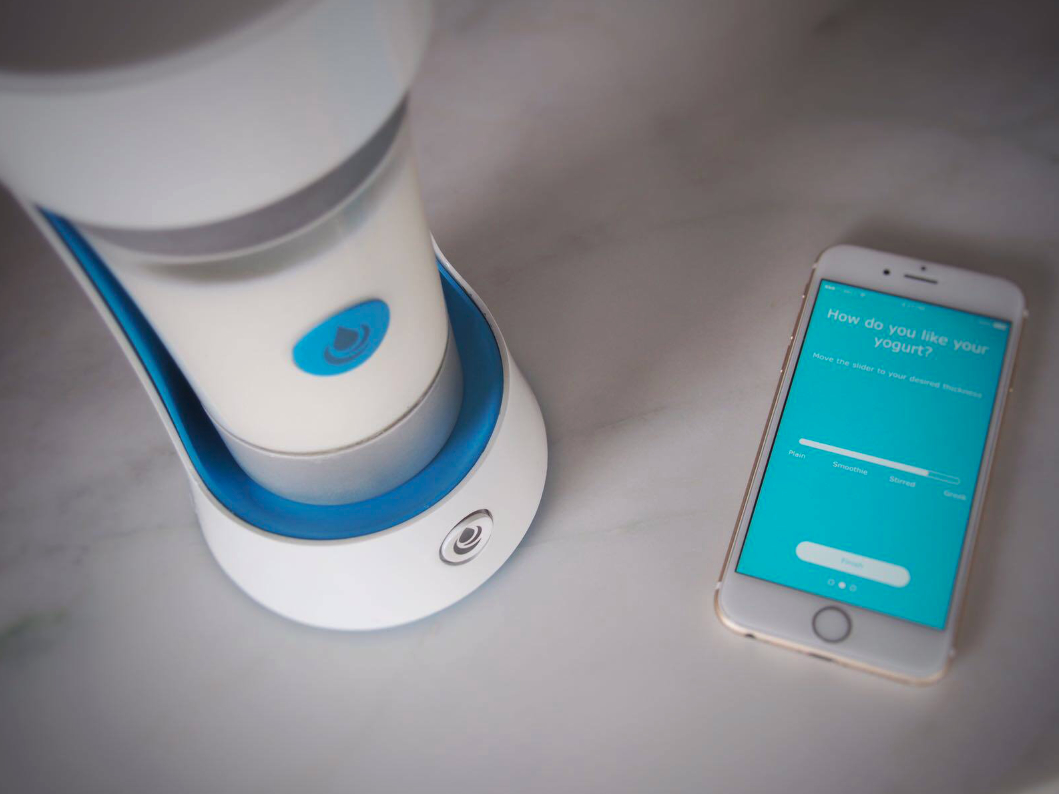 “We do not want our users to compromise on taste,” Mr. Jaiswal said. “It was not practical to slam dozens of buttons on the device to make different kinds of yogurt, so we decided to make Yomee a connected device. With the Yomee app, you can choose any kind of yogurt you want to make — dairy or vegan, plain or Greek.”

Lecker Labs is working on co-branding Yomee pods with several companies, though it’s keeping a tight lid on the details until the official product launch next year. It also is developing various pod flavors and cultures, including kafir, which is similar to yogurt but contains additional bacteria and yeast, as well as pods for vegan yogurts made with soy, almond, coconut or rice milk.

The device will ship to crowdfunding backers in Q1 2020, and will be available on Amazon is Q2 2020, Mr. Jaiswal said.