We use cookies to provide you with a better experience. By continuing to browse the site you are agreeing to our use of cookies in accordance with our Cookie Policy.
Skip To Content
Home » Tyson, White Castle executives see plant protein diversifying

GLADSTONE, MO. — Executives from Tyson Foods, Inc. and White Castle in a Sept. 13 webinar said they see their companies as not only players but leaders in the meat alternatives category. The Gladstone-based Center for Food Integrity, which has a mission of helping companies earn consumer trust, put on the webinar.

Scale will be a Tyson benefit in meat alternatives, he said.

“We have quite a bit of supply relationships that we have access to, and we have a processing power to bring this important initiative to the masses and really look at this in a way that can be cost-efficient and still deliver what customers are looking for,” he said.

Tyson has introduced a Raised & Rooted brand that features plant-based nuggets as well as blended burgers made with a combination of beef and plants. Tyson uses pea protein in its meat alternatives. Supply of peas is not a problem, but processing, which extracts the protein isolates out of the peas, takes work, Mr. Ervin said.

“The supply is there,” Mr. Ervin said. “I think the processing will get there quickly, and we are just going to have to marry those two.”

Mr. Ervin said he has noticed conversations concerning questions about the amount of processing needed to produce meat alternatives.

“It’s one that we’ll continue to watch and understand,” he said. “The other side of it is, with taste being so important, in order to get that taste, there are certain things that need to happen in order for us to develop that (taste). The No. 1 driver is really going to be taste.”

Tyson is aware of other possible sources for meat alternatives, including cell-based meat.

“We’ll see how that continues to unfold,” Mr. Ervin said.

Algae and other protein sources, including insects, are other options.

“That’s the one I’m always a bit cautious of, at least from a U.S. perspective,” he said of insect protein. 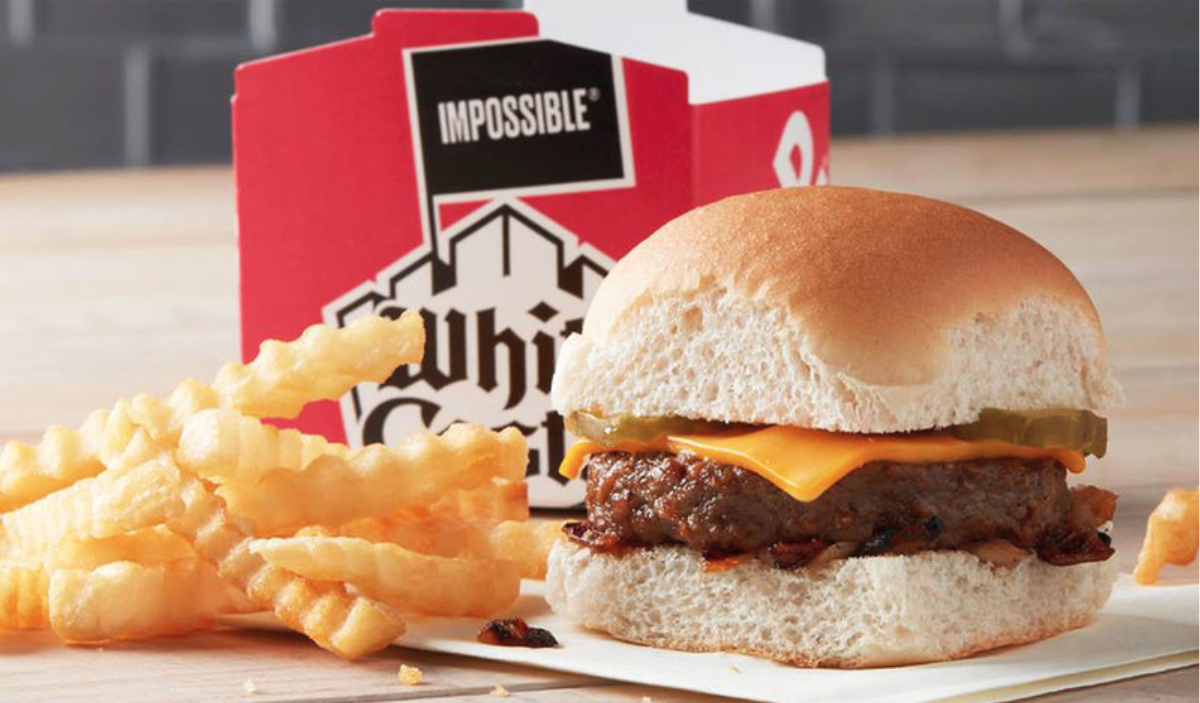 Price is a positive for White Castle, a nearly 100-year-old fast-food chain based in Columbus, Ohio. The chain offers an Impossible Slider for $1.99.

White Castle is diversified in the meat alternatives category as it also offers a Dr. Praeger’s black bean slider and a vegetable slider.

“If you don’t’ really crave a beef taste, then we have a veggie slider,” said Shannon Tolliver, social responsibility and environmental sustainability manager for White Castle.

White Castle began in 1921. The company at that time had to convince people about the safety of ground beef, Ms. Tolliver said. The chain considered a peanut-based vegetable slider during a food shortage in the 1950s but never rolled it out, she said. The emergence of the microwave in the 1980s inspired White Castle to start a retail division.

“As a 100-year-old company, we have to adapt,” Ms. Tolliver said. “We have to change. We have to listen to what our customers are telling us.”

Not only vegans and vegetarians are seeking meat alternatives. Meat-eaters may want a plant-based alternative on occasion, said Ujwal Arkalgud, co-founder of MotivBase, which decodes trends to identify and quantify demand spaces.

“People don’t want to pass by their lives feeling like they have done nothing for the betterment of society." — Ujwal Arkalgud, MotivBase

While people will not compromise on taste, they may be influenced by the sustainability benefits of meat alternatives.

“People don’t want to pass by their lives feeling like they have done nothing for the betterment of society,” Mr. Arkalgud said.

As the meat alternative category matures, people may start asking about specific preservatives, the level of processing and the nutrition in products, he said.

“Once the shiny new object is no longer shining, what are the questions that people are going to start asking,” Mr. Arkalgud said.