We use cookies to provide you with a better experience. By continuing to browse the site you are agreeing to our use of cookies in accordance with our Cookie Policy.
Home » Mobile data clues in on Q.S.R. competition

LONDON— American consumers are loyal to their favorite fast-food restaurant. They are 70% more likely than other consumers to visit Q.S.R.s exclusively, according to a new report from Blis.

“This might be surprising, given the wealth of options available in the United States,” the marketing technology company said. “But it may also be indicative of stronger brand traction given the rich history that these retailers have in their home market.”

The report is the first in a series of studies powered by the Blis Smart Platform, which uses mobile location data to examine patterns of behavior from more than 2.4 million consumers in 133,000 locations around the globe.

Rather than tracking attitudes or perceptions, the company is focused on analyzing actions.

“Today’s consumers live in a post-truth world,” said Greg Isbister, chief executive officer of Blis. “From high-profile political campaigns to social media posts — what we say and share with the world is not always a reflection of our actual lives. For brands seeking to build consumer loyalty and engagement and to drive foot traffic and sales, it is a mistake to rely solely on these curated versions of consumers presented online.”

Blis analyzed the behavior of millions of mobile device signals seen in McDonald’s, Burger King, Subway, KFC and Domino’s and found that exclusivity to individual Q.S.R.s differs dramatically across the world. Population density is one important factor. Densely populated markets, like the U.K. or Singapore, demonstrate significantly less loyalty. These consumers seek out more variety than Americans, who tend to make frequent visits to a handful of their favorite restaurants. 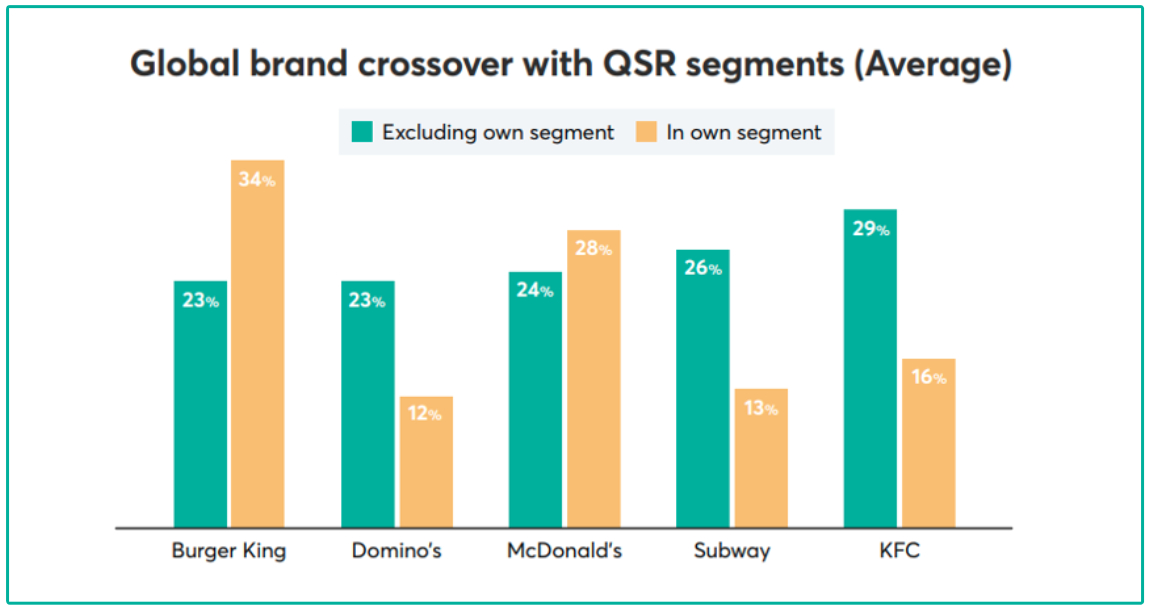 Blis also analyzed competition within and between categories. Three of the five restaurants included in the report saw higher rates of crossover outside of their segment competitors. This means that when a pizza or sandwich loyalist chooses another restaurant, they’re likely opting for an entirely different genre of food, rather than a different pizza or sandwich chain. Subway customers were more than twice as likely to go for a chicken restaurant than another sandwich restaurant, and Domino’s greatest competition came from outside the pizza segment. Burgers and pizza were the main source of competition for KFC.

“This indicates that in their categories these retailers are the undisputed winners of their patronage,” Blis said. “This also suggests that for these retailers in particular, a communication strategy that speaks to diners of other genres could be more effective than targeting direct competitors in their own segments.”

Burger chains saw the most competition within their own segment, with Burger King and McDonald’s facing similarly low levels of category cross over. Customer loyalty in the United States is being challenged by Wendy’s, in particular. Newer entrants in the growing fast-casual segment, like Five Guys and Shake Shack, also are becoming increasingly competitive, according to the report.