We use cookies to provide you with a better experience. By continuing to browse the site you are agreeing to our use of cookies in accordance with our Cookie Policy.
Home » Kuli Kuli taking moringa mainstream with Walmart debut

OAKLAND, CALIF. — Moringa has gradually gained traction in the United States in recent years, achieving a 3% penetration in American households, according to Nielsen. To accelerate the momentum, Kuli Kuli, a brand that dominates more than half of the U.S. retail moringa market, is launching into 2,500 Walmart stores nationwide.

“I think we’re in this interesting moment where we see people really recognize they need more greens in their diet,” Lisa Curtis, founder and chief executive officer of Kuli Kuli, told Food Business News. “I think if you look at the rise of green juices, green smoothies, if you look at the rise of kale and arugula … 10 years ago kale was this backyard weed that no one would think of putting on a menu, and now it’s everywhere.

“I think we’re getting a much better understanding of food as medicine and the impacts dark leafy greens in particular can have on our health. We see a real rise in folks looking for easy ways to get nutritious greens into their diet, and moringa is one of the most nutritious greens on the planet.”

Ms. Curtis founded Kuli Kuli in 2013 after volunteering with the Peace Corps in Niger, West Africa, where she discovered moringa. Earlier this year, the company was named on the Inc. 5000 list of the fastest-growing food and beverage businesses, posting three-year growth of 820% and generating revenue of $4.5 million last year.

“That’s where Walmart keeps all their chia seeds, hemp seeds and other superfoods,” she said. “That’s actually where we’ve seen our products do best. We’ve got it within a similar set in CVS, and we’re the bestselling superfood in the set in CVS, so we’re excited to see what it will do in Walmart.” 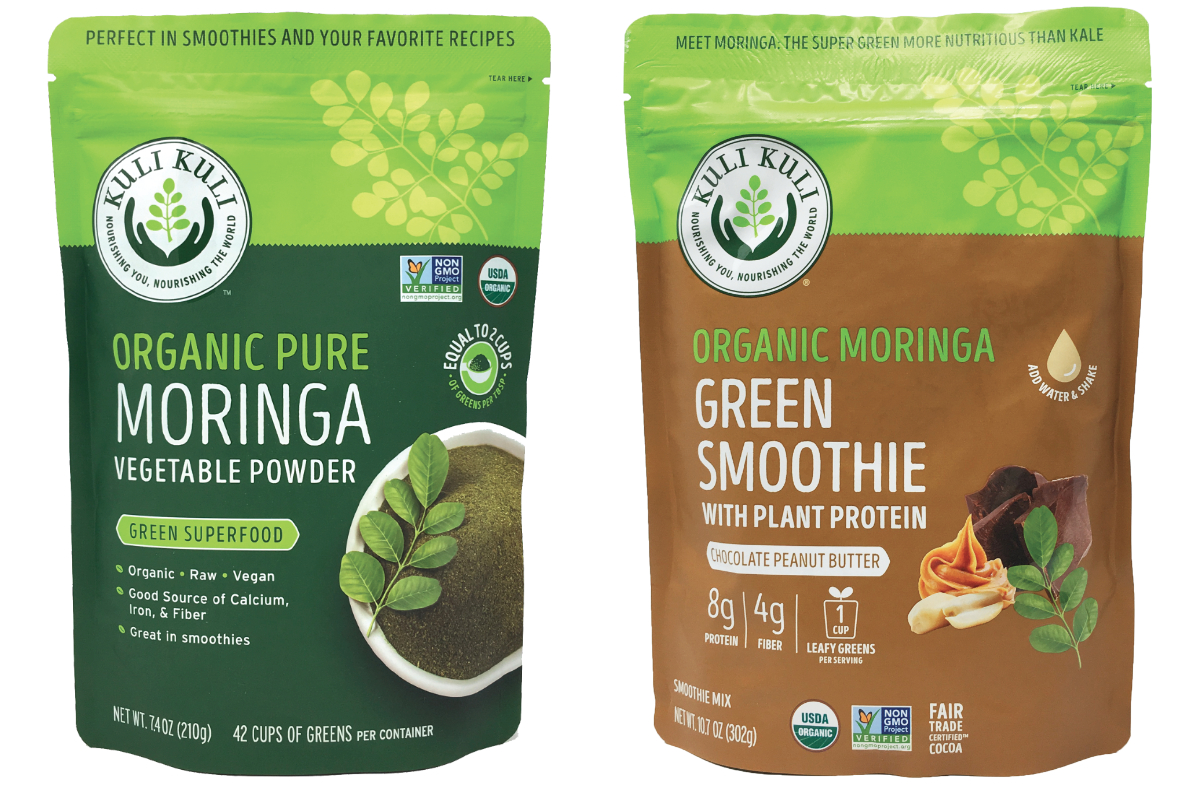 “They have been so helpful in helping us as a small, primarily natural food brand really navigate what it’s like to play in these larger retailers,” she said.

This past March, eighteen94 capital expanded its investment in Kuli Kuli as part of a $6.34 million Series B financing round. Another lead investor was Griffith Foods.

“Griffith has been really helpful on the ingredient side,” Ms. Curtis said. “They’ve done a lot to help us commercialize moringa as an ingredient, and that has enabled us to start selling it to other manufacturers. … We’re super excited to be partnering with other companies and getting high-quality, high-impact moringa out there onto the market, not just in our products but in other products as well.” 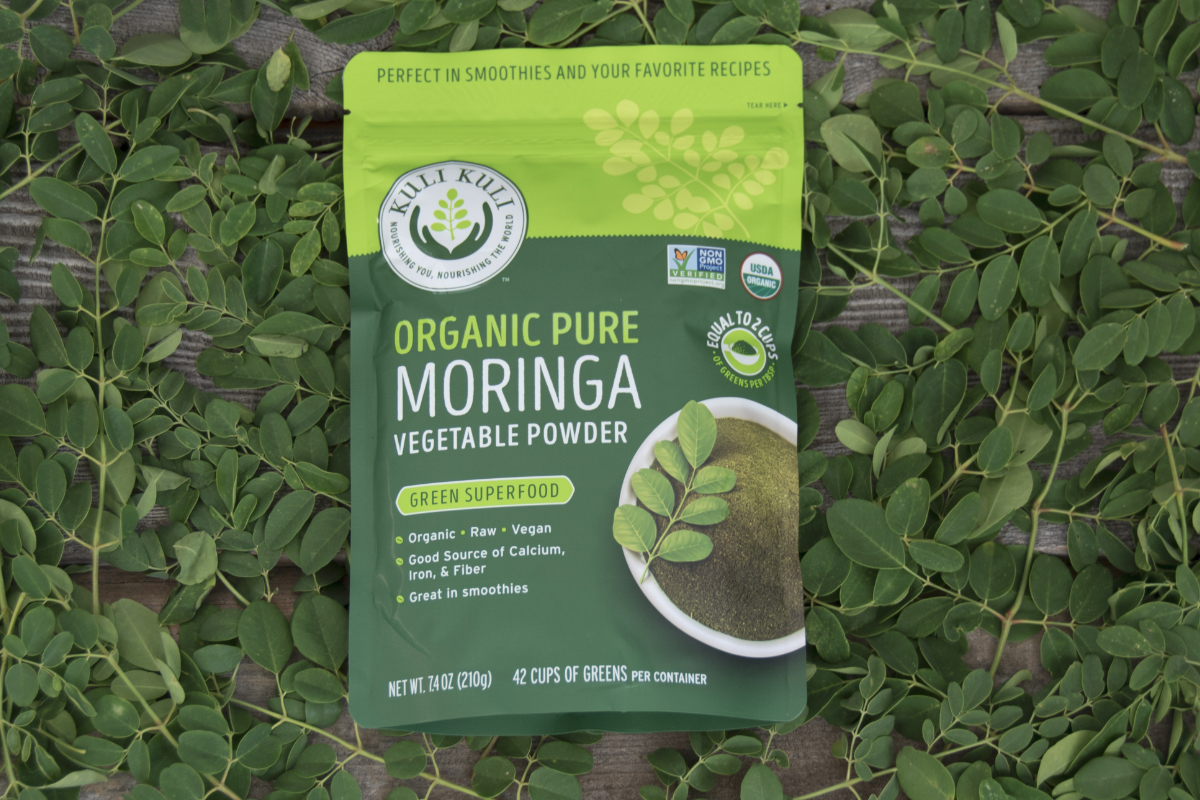 Bringing moringa to the masses

With an earthy green flavor, similar to that of matcha, moringa is mostly used in beverage and sauce formulations, Ms. Curtis said.

“We typically find it goes well in things people expect to be green already,” she said. “It goes really well in green smoothies, green juices, a lot of different beverages there, but also things like pestos and other sauces and seasonings. We do a lot of demos with moringa guacamole or moringa hummus.”

On restaurant menus, moringa has jumped 300% in the past four years, according to Datassential. A restaurant in New York serves moringa chickpea guacamole, Ms. Curtis said.

Still, she said, many Americans remain unfamiliar with the ingredient and its health benefits.

“When we first launched, I did a ton of in-store sampling myself … and 95% of people who walked by never heard of moringa before,” she said. “Now I would say about half of the people who walk by at events and demos say something like, ‘I think I’ve heard of that. It’s good for you, right?’”

She added, “Even though it’s unfamiliar to a lot of Americans, because it’s such an amazing medicinal plant that’s culturally important to so many different groups, we do find there’s a lot of pockets of high resonance with moringa.”

A Certified B Corp., Kuli Kuli sources moringa directly from small family farmers and women’s cooperatives across West Africa, South America and the Caribbean. Last year, the company planted or preserved 12.6 million moringa trees, supported the livelihoods of 1,186 moringa farmers and processors, and donated $9,000 of moringa products to non-profits, schools and community organizations through the United States.

“A big part of our mission is to really fight hunger and improve nutrition through the amazing power of moringa, and we do quite a bit of that within the communities we source from,” Ms. Curtis said.  “Because of this amazing nationwide launch, we really wanted to find a way to reach hungry folks here at home, and so for every product we sell in Walmart within the first couple months leading up to Thanksgiving, we’ll donate a product to a local food bank. So really ensuring that our moringa products are fighting hunger at home and abroad.”