Organic soybean prices on the upswing

KANSAS CITY — The average price for organic food-grade soybeans advanced from the prior two-month period in the July-August period, while average prices for corn and wheat were untested, according to Mercaris, the organic and non-G.M.O. trading platform and market information company.

“Organic soybean prices have begun to slowly pull back from their peak earlier this summer, but remain above last year’s level as harvest approaches,” said Ryan Koory, director of economics at Mercaris. “The two-month period ending Aug. 31 saw the delivered organic food-grade soybean price average $22.73 per bu, up from both the prior two-month period and from a year ago.”

“Despite remaining above last year’s level, the July-August price was below the June-July peak of $23.18, with prices for the month of August averaging closer to $22 per bu,” Mr. Koory said. “With harvest approaching, U.S. (soybean) supplies remain very much in limbo.

“With Mercaris’ current organic acreage outlook indicating U.S. harvested organic soybean acres will decline 8% year over year, the market is on track for tighter supplies next year. However, with this year’s planting delayed by several weeks, final harvest and production figures will be very dependent on weather between now and November. It remains likely prices will see bullish support as the 2019 crop comes out of the field. However, just how much bullish support isn’t yet clear.”

Despite a 7% increase from 2018 in overall harvested organic field crop acres this year, Midwest soybean and corn acres are expected to decline, Mercaris said in its recent Annual Acreage Report. 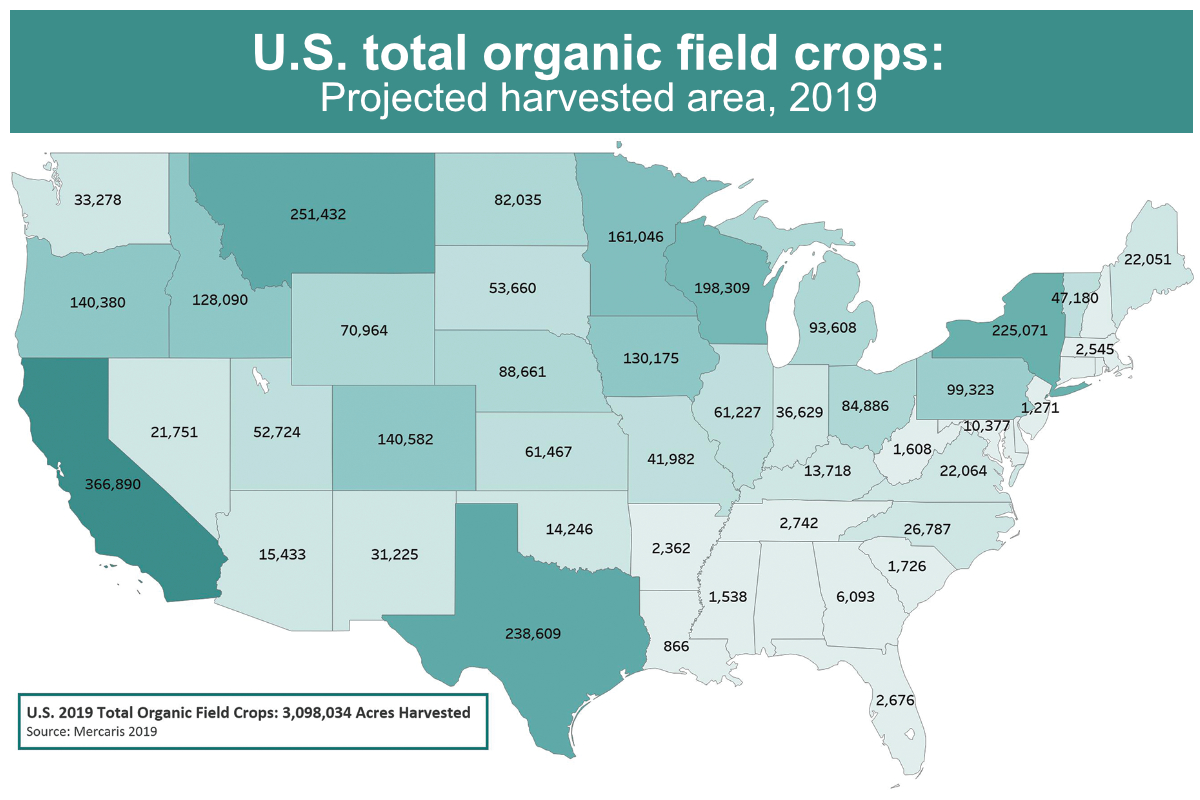 Corn Belt region organic corn and soybean area will be down 10% or more in many states, including Michigan, Missouri and Wisconsin, the Mercaris report showed. The growth in overall certified organic operations mostly is evident in new wheat production in the West and in the High Plains region, Mercaris said.

“This year, U.S. organic crop producers have faced some unprecedented weather challenges, the results of which can clearly be seen in this year’s harvested acreage outlook,” Mr. Koory said. “Adding to this, the acreage limitations are not likely to be helped in any way by yields, which are on track to further tighten the U.S. supply outlook.”

Mercaris expects low 2019 organic production to “spark a resurgence in activity in corn and soybean import markets heading into next year.”

Mr. Koory said, “With a tightening U.S. domestic supply outlook, it seems very likely purchasers will turn to foreign markets to fill in any gaps. However, with the increasingly complex nature of U.S. organic imports, it isn’t clear that the market will see a substantial increase in either organic whole corn or whole soybean imports.”

Recent trends have shown a sharp increase in imported soybean meal, with 2018-19 imports up more than 200% from two years earlier.

Farmers are expected to harvest 3.1 million acres of organic field crops this year, up 7% from 2018, Mercaris said. Total organic acres (including pasture, rangeland and crop area) was estimated at 8.3 million acres, on 18,155 U.S. farms certified by the U.S. Department of Agriculture’s National Organic Program, up 3% from 2018.

“With the addition of 517 certified organic operations this year, it is clear that the U.S. organic sector remains promising, despite the unsteady state of the U.S. agricultural industry overall,” Mr. Koory said.

Mercaris is a comprehensive source of market data and online trading for feed-grade and food-grade organic and non-G.M.O. commodities based in Silver Spring, Md. For more information visit www.mercaris.com. Sosland Publishing Company runs this food-grade organic grain price report in the second issue of Milling & Baking News each month.