Consumer mentions of weight loss and celery juice in the last year were up 209%. Mentions also increased for celery juice and depression (137%), anti-inflammatory benefits (106%) and sickness treatment (75%). Tastewise found 1,730 restaurants that offer celery juice on their menus, which was up 9.5% since last year. Fans of celery juice claim using it brings many benefits, including reducing water weight, easing arthritis, lowering blood pressure and general cleansing, according to Tastewise.

Consumer mentions of C.B.D., a hemp extract, and gut health in the last year increased 286%. Mentions also increased for C.B.D. and sleep (201%), immune system benefit (138%) and energy (70%). Tastewise found 54 restaurants mentioned C.B.D. on their menus, up 222% since last year. Another hemp extract, hemp oil, was associated with stress relief as mentions increased 925%.

C.B.D. may be found in oils, tinctures, drinks, snacks, beer, gummies, ice cream and soap. The U.S. Food and Drug Administration currently does not allow C.B.D. to be sold in dietary supplements and/or foods because it is an active ingredient in Epidiolex, a drug product, but the F.D.A. is exploring pathways that would allow dietary  supplements and/or conventional foods containing C.B.D. to be marketed lawfully.

Mentions of pea protein and wellness increased 542%, according to the Tastewise report. Tastewise found 252 restaurants that mention pea protein on their menus, up 20% since last year. 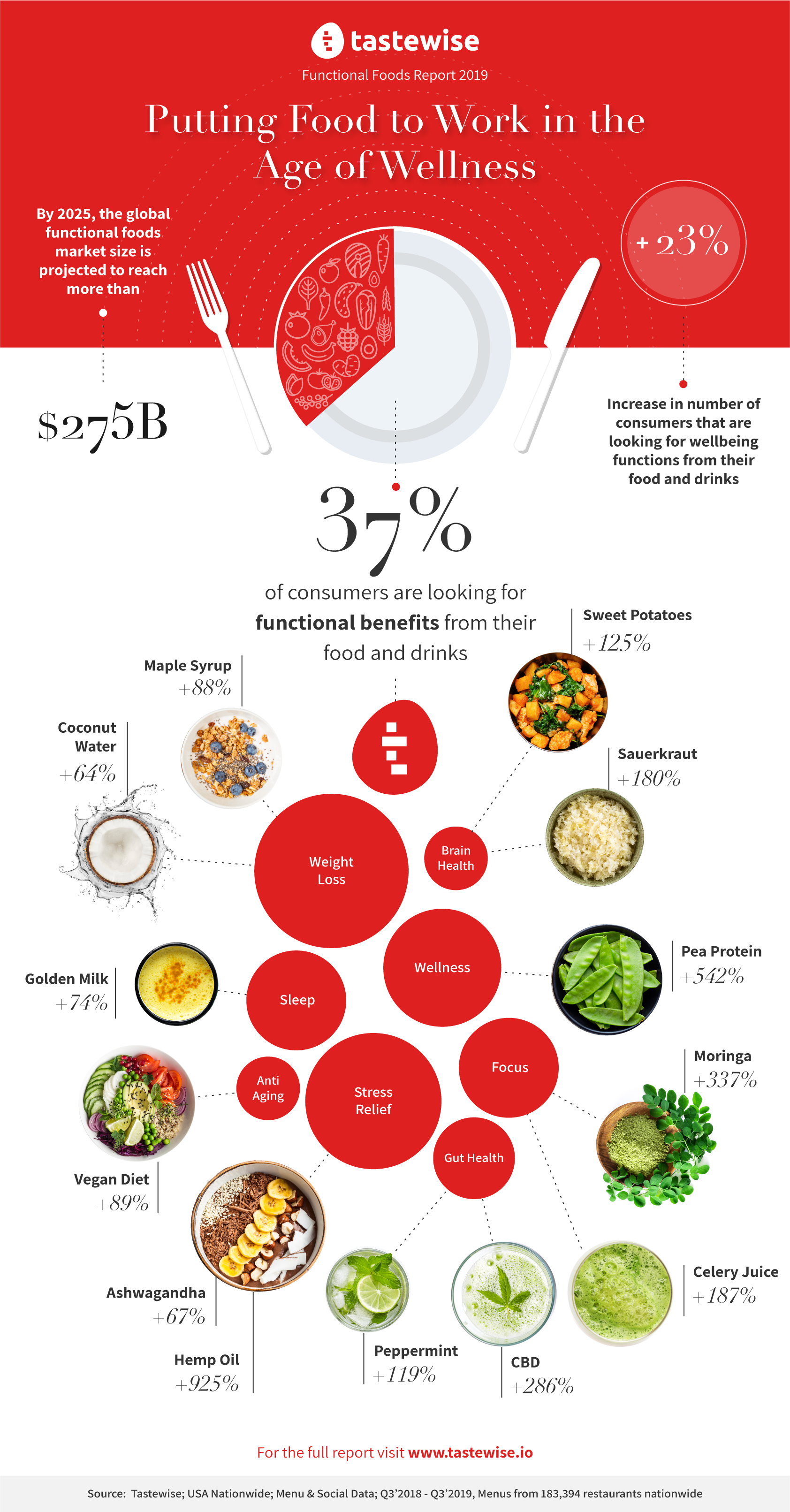 For weight loss, more consumers are turning to provolone cheese, with mentions up 109%, and maple syrup, with mentions up 88%. Maple syrup has expanded beyond its association with breakfast food and now is viewed as a natural sweetener that may replace processed sugars, according to Tastewise.

The report showed a connection between weight loss and coconut water as well, with mentions up 64%. Tastewise found 2,534 restaurants that offer coconut water on their menus, up 14% since last year.

The Tastewise report found 37% of consumers are using food as a functional tool to reach their goals, which include antidepressant, anti-inflammatory, antioxidant, weight loss, energy boost and gut health. Tastewise projects the global functional foods market to surpass $275 billion by 2025.

Tastewise released the report on Sept. 25, the same day the company announced it had raised $5 million in a Series A funding round led by PeakBridge, an investment firm. Last year Pico Venture Partners provided $1.5 million in seed funding to Tastewise.