The San Francisco start-up is scaling up production of the upcycled ingredient to supply to manufacturers of snacks, baked foods and condiments. Local pasta and pizza companies already source ReGrained Supergrain+ flour, which is high in protein and prebiotic fiber and low in sugar. Packaged foods are in development and will brandish a “Powered by ReGrained” mark, Mr. Kurzrock said.

“We’re working on applications in snacks and bakery, but we also are working on something in the condiment category, for example,” he told Food Business News. “A lot of condiments use modified corn starch as a thickener … which is a nutritional vacuum. And our product functionally does the same thing for condiments while adding nutrition. It cleans it up and adds nutrition.”

In addition to collaborating with food manufacturers, ReGrained is rolling out its own branded innovation. A new line of snack puffs is launching soon in five varieties: Mexican street corn, Texas pit barbecue, cheddar, smoked sea salt and cracked pepper, and Urban Garden, a take on a vegetable and herb flavor. The puffs join a range of snack bars in the ReGrained portfolio. The bars are sold in more than 1,000 retail outlets, including Whole Foods Market and Cost Plus World Market, as well as university bookstores and corporate campuses.

“If we had started ReGrained with capital and industry knowhow, this is the product we would have commercialized first instead of the bars,” Mr. Kurzrock said of the snack puffs. “This is a near perfect application that showcases our ingredient as the hero. It’s a really clean deck. It’s non-G.M.O., organic corn and ReGrained, plus seasonings. You can taste the Supergrain+, which you can’t taste in the bar. And there’s no reason to hide the taste. It’s actually something that should be showcased. So this in a much better way showcases the ingredient as the hero.

“And also it does a good job of showcasing potential to some of our future partners.  A good example would be cereal companies, whom we’d love to work with in developing ReGrained cereal. It’s a very similar process. And fiber is obviously very important for cereal.”

ReGrained began as a frat house homebrewing experiment several years ago at the University of California, Los Angeles, where Mr. Kurzrock and his longtime friend, co-founder and chief operating officer Jordan Schwartz, studied economics. The remaining grain from a beermaking hobby often was tossed in a dumpster, until Mr. Kurzrock discovered a bread recipe featuring the byproduct.

With help from the U.S. Department of Agriculture, ReGrained developed a patent-pending technology to process and stabilize the brewery byproduct into a food-grade, value-added ingredient that may be used in numerous applications across the food industry. Several leading manufacturers, including pasta maker Barilla, already have shown interest in co-developing products with the trademarked ReGrained Supergrain+ flour.

“We worked very closely with our partner Griffith Foods, especially on the flavoring piece of it, (to develop the snack puffs),” Mr. Kurzrock said. “They are experts on snacks and seasoning. That’s a core part of their business. That was a really good example of flexing the ‘smart’ part of ‘smart money.’”

The topic of innovating with food waste has been topping trend lists, as a crop of emerging brands showcase creative uses for such items as coffee fruit and leftover pulp from juice or soymilk production. ReGrained was built as a platform for brewers’ spent grain, a previously overlooked, undervalued ingredient, of which tens of billions of pounds per year are wasted or fed to pigs, Mr. Kurzrock said.

“What we’ve learned over the years among other things is that as much as our upcycling sustainability differentiates our product, you can’t lead with heavy handed sustainability messaging, in our opinion,” Mr. Kurzrock said. “You have to make product that meets consumer needs, which means it tastes great and delivers on nutrition.” 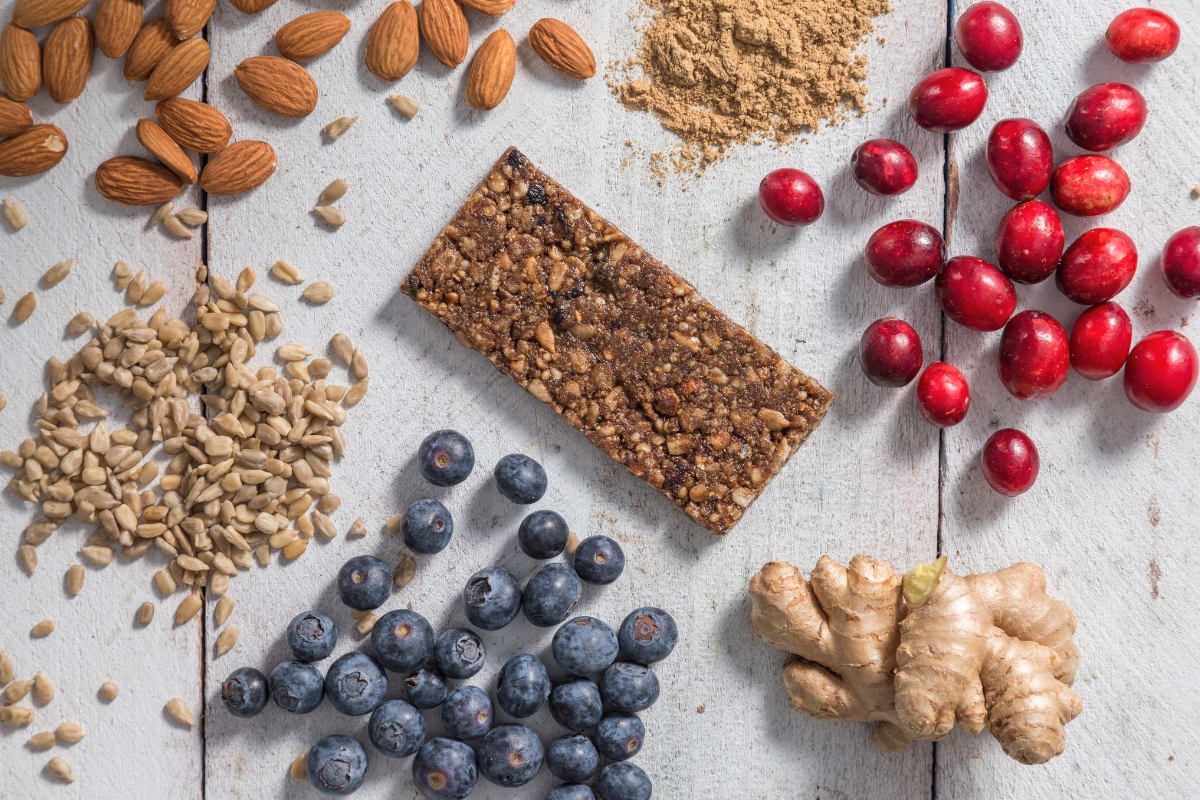 “One of the things about upcycling is it requires some education, so we wanted to develop a logo that also can appear on partners’ products to convey this idea of upcycling, showing this movement of creating higher value,” Mr. Kurzrock explained.

The new look positions ReGrained to transition back to compostable packaging. When the company scaled production of the bars last year, it encountered product quality issues and was forced to switch to conventional wrappers to prevent staleness. The move was disheartening for a brand centered on reducing waste.

“This (the new packaging) not only allows us to reintroduce the products to people who had a stale product before,” Mr. Kurzrock said. “Because we removed the clear window into the product itself, we’re able to add a barrier layer that sets us up for that transition back to compostable. Having that transparent window is something we had to compromise on because the barrier suffers too much with that transparency with today’s flexible film technology.”

The packaging also features a call to action: “Eat Up!”

“It’s a household phrase — ‘Eat up. Drink up. Finish your food,’” Mr. Kurzrock said. “But… it’s of course a nod to upcycling.

“We also hope that people can’t help but eat it up because of how awesome it tastes.”