We use cookies to provide you with a better experience. By continuing to browse the site you are agreeing to our use of cookies in accordance with our Cookie Policy.
Home » Climate change may bring drought to 60% of wheat-growing areas

Climate change may bring drought to 60% of wheat-growing areas

FAYETTEVILLE, ARK. — Up to 60% of current wheat-growing areas in the world could experience simultaneous, prolonged drought by the end of the century unless steps are taken to mitigate climate change, according to a study that appeared online Sept. 25 in Science Advances. The study may be found here.

In present-day weather patterns, severe drought simultaneously could affect up to 15% of wheat-growing areas, according to the study, which also listed strategies to reduce the impacts of water shortages on wheat production. The strategies included shifting the wheat growing season, implementing full or partial irrigation, increasing the efficiency of water use, and using wheat varieties with enhanced drought and heat tolerance.

Wheat, the world’s largest rain-fed crop in terms of harvested area, supplies about 20% of all calories that people consume. A sustained annual yield increase of 2.4%, which compares to the current rate of 0.9%, is needed to meet the projected increase in global food demand, according to the study.

Wheat producers, according to the study, will have to cope with warmer temperatures that will accelerate crop development and lead to earlier maturity, which creates higher water demand per day. The study found a close relationship historically between the total area affected by severe drought worldwide and food prices.

“If only one country or region sees a drought, there is less impact, but if multiple regions are affected simultaneously, it can affect global production and food prices and lead to food insecurity,” said Song Feng,  associate professor of geosciences at the University of Arkansas in Fayetteville and one of the study’s authors.

Miroslav Trnka, Ph. D., a professor at the Global Change Research Institute in the Czech Republic, was another author.

Global warming is expected to increase the frequency and intensity of severe water scarcity events, according to the study.  The study’s projections show climate change stabilization in line with the Paris Agreement substantially would reduce the negative effects of climate change, but the effects still could double between 2041 and 2070. 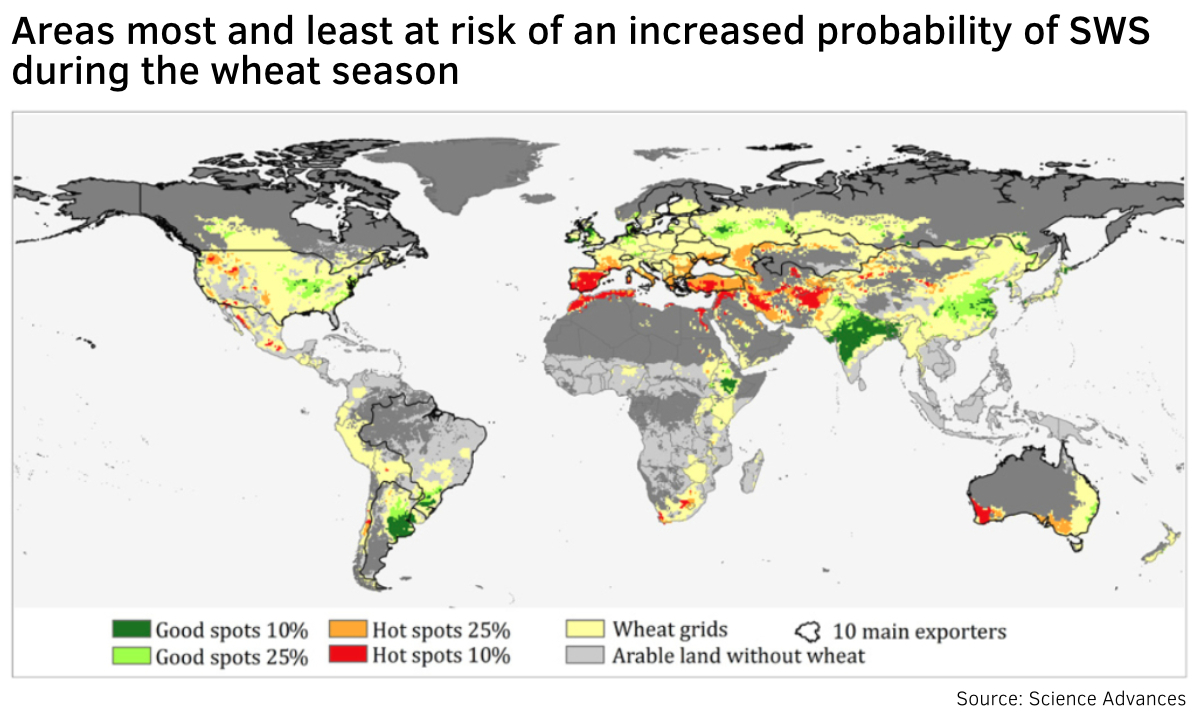 Severe water scarcity by the middle of this century likely is to occur in an almost continuous belt from the Iberian Peninsula in the west to Anatolia and Pakistan in the east, according to the study. Significant increases in severe water scarcity is likely to affect southeastern Ukraine, southern regions of Russia, western parts of the United States and Mexico, southwestern Australia and South Africa. Wheat-growing areas in South America will be affected marginally.

The study examined strategies to reduce the impacts of water shortages.

Shifting the harvest date to earlier or later in the season may reduce yield losses, but it could have a limited scope on regions that have the highest risk of increasing water scarcity within the wheat season.

Using drought- and heat-adapted wheat varieties is an option. This approach should exploit not only genetic variation that provides productivity gains but also quality traits. Dwindling water resources in some regions cast doubt on how irrigation, another option, will increase wheat yield on a global scale without “massive” investment programs.

Managing soil in a way that builds up soil water for the next crop should be considered. Water may be conserved by minimizing tillage and reducing non-productive water loss, with evaporation being an example, from the unshaded soil surface. Covering the soil surface with a mulch of plant residues reduces water loss caused by evaporation.