We use cookies to provide you with a better experience. By continuing to browse the site you are agreeing to our use of cookies in accordance with our Cookie Policy.
Home » New vegan frozen dessert bars sweetened with allulose

HUNTINGTON BEACH, CALIF. — Frozen dessert brand Revelé has harnessed the rare sugar allulose as an ingredient in the creation of its new line of plant-based, non-dairy frozen desserts.

Revelé Vegan Frozen Yogurt Bars are chocolate-covered, vegan frozen yogurt bars made with organic coconut milk, organic almond milk and probiotics. The bars are sweetened with allulose, a naturally occurring rare sugar that is absorbed by the body but not metabolized, resulting in lower calories.

“What makes allulose such an incredible ingredient in the creation of healthy frozen desserts is that it acts so similarly to traditional table sugar, without any of the negative side effects,” said Jareer Abu-Ali, Ph.D., chief executive officer and founder of New Direction Foods, the manufacturing and co-packing company behind the  Revelé brand. “The molecular makeup of allulose allows for it to mimic sugar’s ability to create the rich, dens 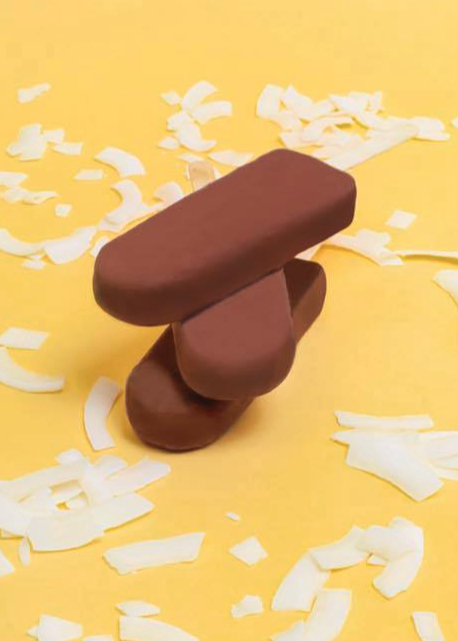 e and creamy sensation you get when enjoying traditional ice cream. There is no need to pump the product full of air or dilute it with water. At 70% of the sweetness of table sugar and the body’s inability to absorb its calories, we are able to use more allulose to match sweetness expectations without impacting how many calories the treat contains. This is a revolutionary way to approach healthy eating, without sacrificing indulgence.”

“When people hear the word vegan or plant-based, they automatically assume a lot of negative things about flavor and philosophy,” Dr. Jareer said. “If you try these bars, you won’t be able to stop talking about them to anyone who will listen, but it’ll be because of how good they taste. It’s hard to believe how good they are for you, too, but it’s true.”