We use cookies to provide you with a better experience. By continuing to browse the site you are agreeing to our use of cookies in accordance with our Cookie Policy.
Home » G.M.A. says C.B.D. is the ‘wild west’

ARLINGTON, VA. — The Grocery Manufacturers Association (G.M.A) is campaigning for federal regulation and oversight in the cannabidiol (C.B.D.) market. While sales of C.B.D. products are expected to more than double in the years ahead, hitting $6 billion by 2025, new research from the trade association suggests consumers still aren’t sure what C.B.D. is, what it does or whether it is safe.

One in three Americans use C.B.D. Most of them believe it is subject to federal regulations and safety oversight, according to G.M.A. research. Upon learning that the industry operates within a state-by-state patchwork system of regulations, 82% of consumers expressed alarm, and more than two-thirds said they are “extremely” or “very” concerned. Another 84% said they are worried about the varying regulations that could result from the current patchwork system.

“It is the role of federal agencies to ensure a safe and transparent consumer marketplace — but the C.B.D. market is currently the wild west,” said Geoff Freeman, president and chief executive officer of the G.M.A. “Without a uniform federal regulatory framework in place, consumers lack the basic information they need to make informed decisions about C.B.D. G.M.A. will build a broad-based coalition to lead an aggressive campaign to protect consumers by advancing regulatory clarity.”

G.M.A.’s research shows confusion is rampant, even among the 60% of consumers who said they are familiar with the ingredient. Close to 40% mistakenly assume C.B.D. is another name for marijuana. More than half think it is psychoactive.

Misunderstanding is particularly high among millennials, who are more likely than other groups to purchase C.B.D. products. Close to half of millennials thought C.B.D. is intoxicating, and 30% said they purchased a C.B.D. product because they thought it would give them a high. Only 4% of boomers bought C.B.D. for the same reason.

Boomers were far less likely to purchase C.B.D. products (15%, compared to 54% of millennials) and more likely to know it is not psychoactive. They also tend to be more skeptical. Forty-six per cent of boomers said they think C.B.D. is safe, more than a quarter said they aren’t sure, and 17% said it depends on the manufacturer or the seller. In contrast, 79% of millennials said C.B.D. is safe, 9% said they were not sure, and 6% said it depends.

Pain management is the most common reason for buying C.B.D., followed by stress reduction and sleep issues. Despite a lack of reliable research and testing, 21% of consumers reported using C.B.D. to alleviate cancer symptoms or treat neurological disorders. C.B.D. currently is only approved by the 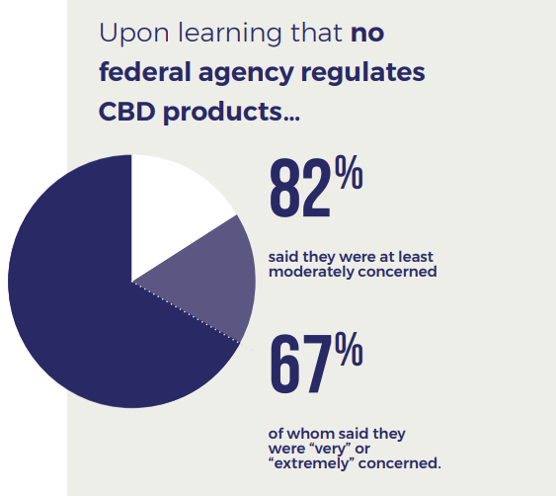 F.D.A. for use in the treatment of epilepsy.

“C.B.D. is a case study in the federal government’s struggle to keep pace with consumer demand,” said Betsy Booren, Ph.D., senior vice-president of regulatory and technical affairs at the G.M.A. “Industry and consumers alike need government to determine safety and provide regulatory clarity. Until this occurs, the most experienced and highly regulated brands cannot enter the market.”

Eight in 10 respondents said C.B.D. products should be federally regulated, according to the G.M.A. Seventy per cent said they would be more confident in the safety of C.B.D. products if they were manufactured by large, well-known brands. More than half of consumers said large brands have higher manufacturing standards and more safety controls in place. Consumers also think big brands are more cautious and have more experience making consistent, high-quality products.