We use cookies to provide you with a better experience. By continuing to browse the site you are agreeing to our use of cookies in accordance with our Cookie Policy.
Home » Plant-forward menus taking root

KANSAS CITY — For many, embracing the plant-based trend is filled with aspiration — the embrace of personal health and wellness as well as that of the planet. For chefs, plant-forward menuing is not only a significant mega-trend that’s catching on with diners. It is also about letting customers explore new ways of eating that rely less on meat, while letting culinary creativity run wild with center-of-the-plate innovations.

Eating vegetarian or vegan is seen as a “celebration not a sacrifice” by James Truman, longtime editorial director at Condé Nast. Surprising many who knew him well from the publishing world, Mr. Truman ditched it all to become owner of Nix, a New York-based upscale vegetarian restaurant featuring the expertise of Michelin-starred chef John Fraser.

“At the beginning, Chef Fraser and I were determined to prove two things: one, that you don’t have to leave a vegetarian or vegan restaurant hungry and half-satisfied; and two, that the flavors, textures and variety of the meatless food we served should be such that carnivores who dined with us would not even notice that there was no meat,” Mr. Truman said.

Flexitarians — consumers who sometimes eat meat, perhaps once a day instead of twice, or perhaps three times a week instead of seven — are part of a gradual but substantially growing population. Yet Mr. Truman and Chef Fraser anticipated that around 50% of Nix guests would not be exclusive plant-based eaters. 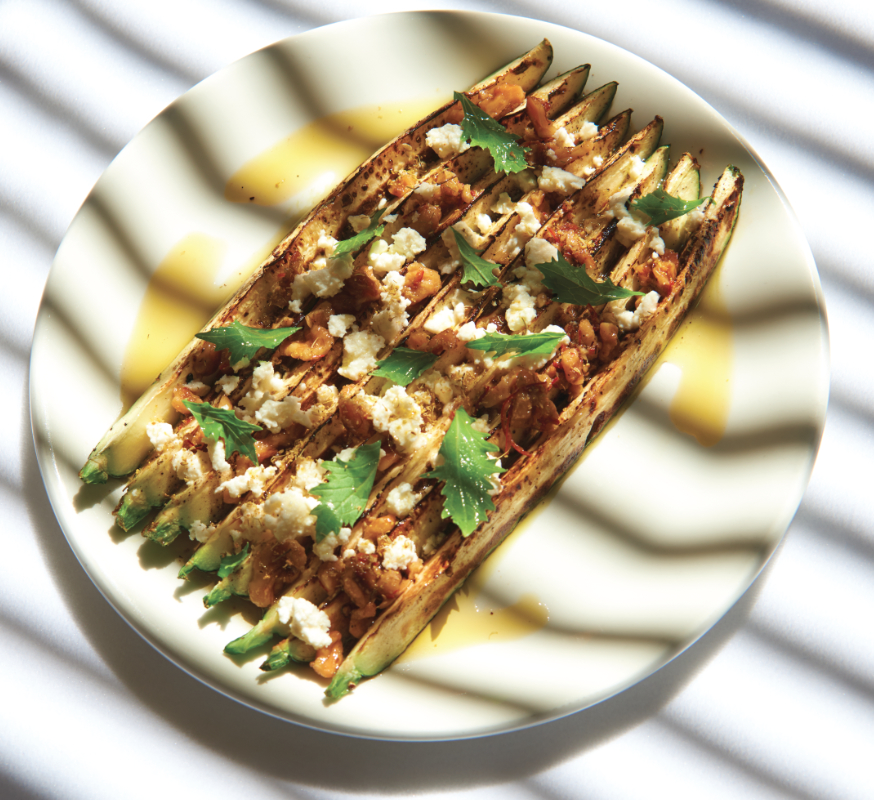 "This shift doesn’t grab headlines because it’s a quieter, non-political movement, but it is of great consequence and was very much in our thoughts when we discussed the philosophy of Nix," Mr. Trumain said. "Our central belief was that not eating meat should never feel like abstaining from something; rather, it should feel like a celebration of something else, which in this case is the delicious ways we prepare vegetables."

Looking to fall’s harvest, the chefs at Nix have begun “playing around” with corn, iterations on squash, peaches, “and lots of mushrooms, both cultivated and foraged,” Mr. Truman said.

Some recent additions to the menu include griddled squash on a bed of macadamia nut cream with macerated cherries and bitter greens; crispy pasta cake with lime mayonnaise, grilled corn and truffles; and for brunch, a Mexican-style shakshuka with cactus and tomatillos.

Two tandoor ovens are in constant use at Nix since the “high and dry” heat they generate has proven to be ideal for cooking vegetables.

“We not only make breads in the ovens, but we also use them to roast and grill,” he said.

Meanwhile, mushrooms are slow-poached for shiitake cacio e pepe, and lots of raw ingredients are utilized while brining and fermentation experimentation is ongoing in efforts to create another sensational and unique vegetarian treat.

The name Chef Matthew Kenney, that of a twice-nominated James Beard Award Rising Star Chef, is becoming ubiquitous with international restaurant openings with as many as 50 restaurants anticipated by 2020. About 17 years ago the chef veered from his butter- and meat-centric style toward plant-based cuisine. His latest enterprise, Plant City, Providence, R.I., features four vegan restaurant concepts in a food hall setting. It is a testament to his conviction that “our food choices impact everything else about our health and leading [our] best life,” he said.

“Activists want to make people change choices; I want to show there’s another way to be a chef by utilizing organic ingredients, by nurturing health and wellness to inspire others to do the same," Chef Kenney said.

Chef Kenney ranks his heirloom tomato and zucchini lasagna with macadamia ricotta, sundried tomato marinara, and pistachio pesto as among his most flavorful (and perhaps beautiful) dishes.

“We serve it in 10 or 12 of our restaurants, including in Providence,” he said. “It’s been on the menu [elsewhere] about 15 years — it tastes like a garden!”

He also loves the location’s farro “sausage” taco with its meaty texture, as well as jackfruit tacos seasoned with guacamole, plus cashew crème and salsa verde.

“Jackfruit has a meaty texture; it’s not sugary and, since it’s very porous, we like the way it absorbs various flavors," he said.

Enter restaurants Zafra or Cucharamama in Hoboken, N.J., created by chef Maricel Presilla and her business partner Clara Chaumont, and you’ve entered the realm of a chef who wields a cucharamama, a.k.a. a “mother spoon,” with knowledge, creativity and a bit of audacity. A Latin American and Spanish cuisine aficionado, she is also author of the book Gran Cocina Latina: The Food of Latin America. Chef Presilla is a champion of designing menus “that make vegetables stars through rich seasoning and [placing] animal protein as supporting characters.” For example, she menus a white bean soup with a garlicky sauce (sofrito), full of tomatoes, roasted peppers, cabbage, squash and greens.

“A bit of pork or a few boneless chicken thighs cut into small pieces will give it richness, but will not dominate the dish,” she said. “That’s a complete one-pot meal to eat with crusty whole grain bread.”

Currently, guests enjoy her play on large “sculptural” vegetables like cauliflower stuffed with bread and a sofrito stuffing straight from the wood-burning oven. The menu will feature a rich, slow-cooked bean soup she dubs “wood-burning oven fabada” this fall. The oven is also used for roasting a whole ripe plantain — as it is done in Manabi, Ecuador — then served charred on a wooden board to season at the table with sides of grated queso blanco, plus a peanut and achiote seasoning paste, and ripened cream.

The secret to creating mouthwatering vegetable-centric dishes lies in the seasoning. Some of Chef Presilla’s favorites are dried pepper powders, hot peppers and even freshly chopped peppers, as well as an array of spices including cumin, allspice, oregano, bay leaf, plus herbs such as epazote, huacatay, fresh mint and also olives. But above all her “secret weapon” has been “cacao nibs and a smoky cacao and chile powder mix, and fine chocolates of varying cacao contents, which I add to food — even to pizza — in discreet amounts to give it backbone,” she said.

As senior director of culinary and nutrition strategy at ISS Guckenheimer, Chef Bill Billenstein knows how challenging it is to be everything to everyone. Guckenheimer, the San Mateo, Calif.-based corporate food service company, enjoys a reputation for providing healthy, nutritious and consistently upscale meals within the on-site employee cafes of its clients including technology and pharmaceutical clients, among others. In 2017, the company was purchased by Copenhagen-based ISS.

“The way the West Coast eats is different from other areas of the country. But we’re seeing varying degrees of this plant-based trend in the Midwest now — they want to see what it’s all about," he said. "At Guckenheimer, we see it as ‘common sense plant-forward’ recipes. Guests should have choices."

In early July, in several California accounts, the chef and his team piloted “Power Plant” with a focus on seasonal plant-forward recipes using animal protein as a condiment, and acknowledging “there are lots of ‘flexitarians’ out there.” One of the Power Plant concepts is a build-your-own bowl.

“You can have one complimentary add-on skewer (such as glazed jackfruit), plus you can choose pork or flank steak or chicken (about 2-1/2 oz of protein)," Chef Billenstein said.

One client, a large pharmaceutical company, was pleased to find the price of such a bowl is about $1 less than the more meat-centric dishes, he said. For those guests seeking it, additional animal protein is available.

Chef Billenstein is especially pleased with the visual results as well as the flavor profile of a new Ahi Beet Poke Bowl.

“Instead of 100% animal protein (tuna), we take pink beets, marinate them in the same dressing as the tuna, and replace half the tuna. Not only is the look and the mouthfeel almost indistinguishable, but we’re reducing our reliance on animal protein, reducing the cost of the meal, and also supporting ocean health.”

Prior to taking his current position, Chef Billenstein spent several years on the Guckenheimer-at-Google team, helping to co-create the Google Food brand. He was also a presenter at the Culinary Institute of America (C.I.A.)’s Global Plant-Forward Culinary Summit in Napa Valley in May, as was Chef Presilla, where the plant-forward trend is taking on a new educational track. 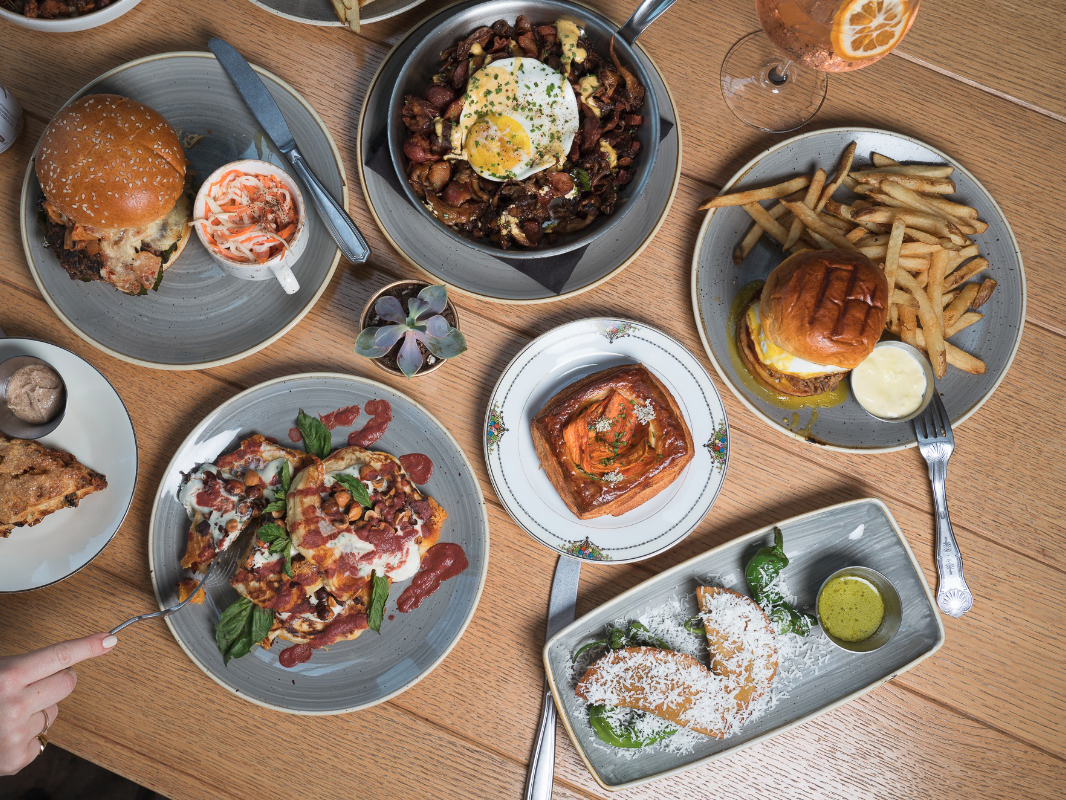 “We’re in very early stages of developing a Plant-Forward Culinary Arts Education and Certification Initiative (fall 2020) for those seeking a deep dive into nutrition, sustainability, flavor development strategies, world flavors, etc.,” said Greg Drescher, vice-president of strategic initiatives and industry leadership at the C.I.A. in Napa, Calif. The initiative, he said, is in principal partnership with Google, and thus in partnership with vendors Guckenheimer and Compass Group.

When Mr. Drescher refers to “plant-forward” cuisine, he is clear that the larger focus is flexitarian — using meat as a condiment, consuming it occasionally, perhaps as a celebratory treat. He sees the format for how you present plant-forward as being a critical element for the success of such a menu and cites the shareable plate at The Bad Hunter in Chicago:

“The main menu is completely vegetarian," he said. "Then, clipped to the main menu, there’s a list of one beef dish, one pork, one lamb, so four or five animal options; at tables there’s this blizzard of plant-based items plus a lot of flexitarian sharing. The format is shareable plates and the philosophy is ‘eat meat, but not a lot.”