We use cookies to provide you with a better experience. By continuing to browse the site you are agreeing to our use of cookies in accordance with our Cookie Policy.
Skip To Content
Home » The story behind Coca-Cola’s 'first new major brand' in 10 years

ATLANTA – In 2020, The Coca-Cola Co. is slated to launch what the company calls its “first new major brand” in a decade.

“As the largest and fastest-growing part of the water business, mainstream flavored sparkling water is a segment we know we must double-down on,” said Celina Li, vice-president of water for Coca-Cola North America. “AHA is our big-bet brand in this big-bet category.”

The development process that brought AHA from concept to prototype in six months was formed by extensive research and consumer insights, Coca-Cola said. The company spoke to thousand of consumers ranging from those who frequently drink sparkling water to those who have not yet found one they enjoy.

“There are unmet needs for consumers in the category today, both for those who don’t drink sparkling water regularly today and for those who do,” said Julie Siwemuke, sparkling water director for Coca-Cola North America. “When shoppers browse the sparkling water aisle, they’re looking for interesting and approachable flavors that offer a refreshing treat. They’re also drawn to fun, colorful brands with personality.”

The research and development team started with a list of 800 potential flavors before testing 50 combinations, eventually whittling the flavors down to 18 that the company taste tested in major cities across the country. By the end of May, Coca-Cola had pared the flavors down to the final eight.

“We knew we needed to launch something new and differentiated,” said Nilesh Karava, senior manager of R.&.D. for Coca-Cola North America’s water and active hydration portfolios. “But we wanted to appeal to a wide base of consumers. Some of the flavors we landed on — green tea, honey and black cherry, for example — are very niche. If we were to launch these on their own, we’d be limiting our consumer base. That’s why we paired mainstream fruit flavors — berries and citruses — with trending tastes, or what we call ‘halo’ flavors.”

As part of the testing process, Coca-Cola consulted a range of customers and retailers across channels, including grocery, drug, mass retail and convenience.

“Our partners told us, ‘We don’t need yet another lime- or berry-flavored sparkling water,” Ms. Siwemuke said. “We need something fresh and new that can help grow the category. Retailers truly believe in the future of sparkling water and are looking to Coca-Cola to lead. They’re as excited about AHA as we are.” 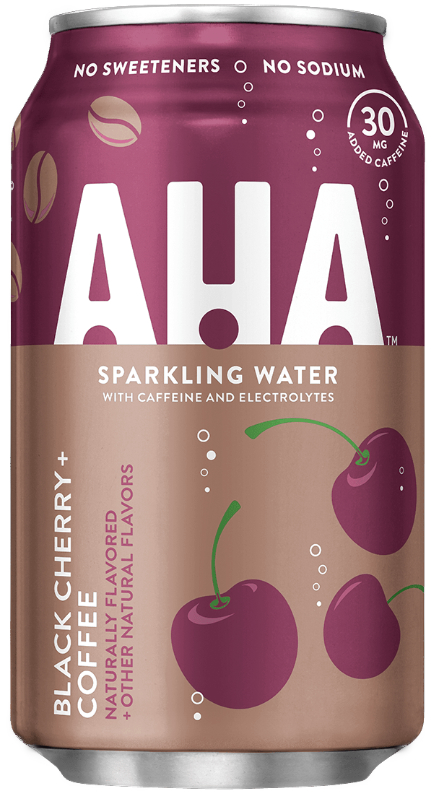 “Our research showed that some sparkling water fans are wanting — but not getting — a little pick me up,” Mr. Karava said. “Adding caffeine is challenging because it has a naturally bitter taste, so we had to work our magic. Caffeinated beverages can contain anywhere from 10 to 50 mg of caffeine, but we netted out around 30 mg for these two AHA flavors. That’s our sweet spot. Anything beyond that would compromise taste, which we of course couldn’t do. We also knew that not all consumers wanted caffeine and that’s why we decided to provide the option of caffeine versus offering (caffeine in) all of the eight s.k.u.s.”

AHA beverages will replace Dasani Sparkling at retail, which has been on the market since 2014. Set to hit shelves in March 2020, the beverages will be available in multi-packs of 12-oz cans and in 16-oz individual cans.

“As part of our evolution to be a total beverage company, we want to compete and win in every category where we see opportunity to meet consumer needs,” Mr. Karava said. “As one of the fastest-growing segments of the beverage industry, sparkling water is critically important to this journey. The speed in which we took the AHA brand from idea to shelf is a clear demonstration of what we call our core growth behaviors — iterative, curious, empowered and inclusive — in action. We wanted to make a big statement with something people haven’t seen in the sparkling water aisle before, and that curiosity drove us to explore such unique and unexpected flavor pairings and find a way to add caffeine. And a fast-moving project of this scope required close collaboration and trust across functions, including R.&D., technical, marketing, design, legal, commercial and more. We’re incredibly proud of this work — what we’ve created, and how we’ve created it — and can’t wait to see what people think.”