We use cookies to provide you with a better experience. By continuing to browse the site you are agreeing to our use of cookies in accordance with our Cookie Policy.
Home » kukki delivers ready-to-drink cocktail innovation

CHICAGO — Protected by more than 3,000 patents, Germany’s kukki GmbH produces the world’s only line of ready-to-drink (R-.T-.D.) cocktails that come in individual glass bottles complete with ice cubes, identifiable pieces of fruits and in some varieties, whole mint leaves. Void of any chemical ingredients, the cocktails have an alcohol content of 10.3%, a critical number to maintain product quality.

The cocktails are available in seven varieties, all ready to serve from the freezer after a slight defrost under warm water or in the company’s patented “toaster.” Upon thawing, the beverage becomes fluid while the ice cubes stay intact. Just insert a straw and enjoy.

In the two years since the cocktails were launched, they have gained an extensive hospitality client list that includes ibis Hotels, Aramark, the Radisson Hotel Group and the Concept Group. Select varieties are now sold at retail in Europe.

Andy Romanowski, one of the company’s three founders, discussed the innovative new product at Anuga, which was held Oct. 5-9 in Cologne, Germany. Responsible for sales and marketing of the new R-.T-.D. cocktail concept, Mr. Romanowski said the brand should be available in the United States by 2021.

The other two founders — Josef Klemm and Saif Hamed — worked on the development of an ice cube machine that uses extremely high pressure to produce ice perfectly formed in a cylindrical shape to fit into a bottle. The machine is housed at the company’s manufacturing facility in Berlin, Germany, where production commenced in early 2017.

“The ice cubes are inserted into the glass bottle, which is then filled with the ‘beverage,’ a mixture of fresh fruits, juices and spirits,” Mr. Romanowski said. “The combination of ingredients lowers the freezing point, which is why the beverage thaws before the ice cubes. It’s all based on scientific principles without the use of any preservatives or artificial ingredients.”

Water is just hydrogen and oxygen and the molecules are attracted to each, whereas alcohol also contains carbon. The carbon lowers the force of attraction and requires lower temperatures to solidify. In general, alcohol freezes at -114.1 degrees Celsius (-173.5 degrees Fahrenheit), while water’s freezing point is zero degrees Celsius (32 degrees Fahrenheit.) Other compounds may further impact freezing point, including the inherent sugars and acids in fruit juices.

“If you freeze a glass bottle, it usually shatters into pieces,” Mr. Romanowski said. “It’s basic physics. Because the ice cubes are already frozen when inserted into the bottle, they don’t expand during the freezing process, which means the bottle will stay intact. Of course, there is a little bit more to it. But the key technology is the ice cubes.

“Getting them made was one of many challenges. Basically, we ended up building our own special machine that produces the right quality in the amount required per hour. So we ended up with patents for the ice-making machine, the machine that inserts the ice cubes into the bottles and our special toaster.” 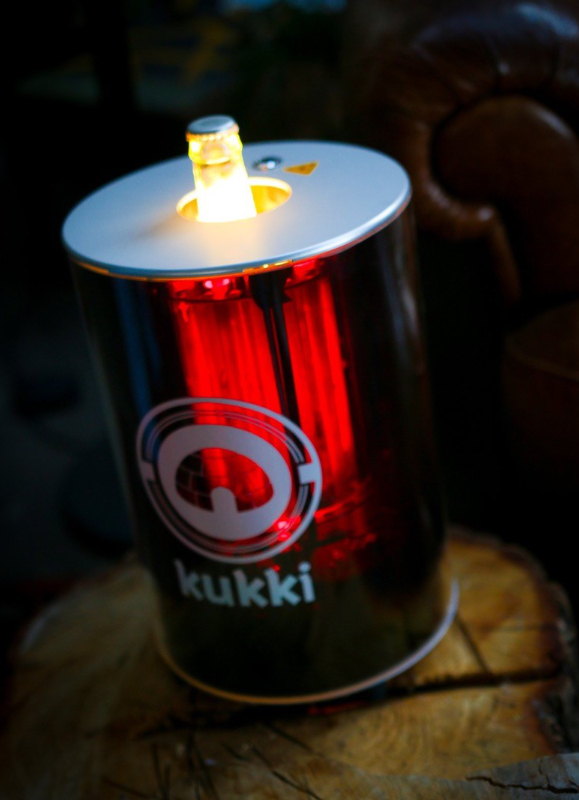 The kukki toaster is used in hospitality settings. It thaws the bottled cocktail in 30 seconds. The liquid beverage remains cold, while the ice cubes stay frozen.

“Our kukki toaster is very compact in size,” Mr. Romanowski said. “It fits exactly one bottle and is designed mainly for hotel bars or smaller events. Today you will find them in nearly every IBIS Hotel in Germany, beach bars in The Netherlands, on skiing slopes in Switzerland and at the bar at Iceland’s Capital Reykjavik Airport.

“The handling is super easy. When a customer orders one of our drinks, the staff places the bottle inside the toaster, which turns on automatically and does its job in 30 seconds. The kukki cocktails save a lot of preparation time, overhead and waste.”

While the company chose glass for its initial roll-out because of its recyclability, the company now is working on a non-glass option for venues that prefer to be glass free. This includes poolside bars and outdoor festivals. The company also is planning on growing its manufacturing business outside of Germany.

“We have fine-tuned our manufacturing process so it’s capable of producing our drinks semi-automatic,” Mr. Romanowski said. “The whole process requires only two to three people compared to a fleet of people that did everything by hand when we started.

“We recently started talking to potential partners who are interested in becoming a franchise partner. They would produce kukki cocktails for their local market.”