KANSAS CITY — Boosting demand in the market for gluten-free foods are new product launches featuring flours based on nuts, seeds, beans, fruits and vegetables that appeal across a range of diet trends. Cassava, coconut and cauliflower are among ingredients replacing wheat in tortillas, pizza crusts and snacks. Such products are perceived as healthier than traditional options, said Melissa Abbott, vice-president, The Hartman Group, Bellevue, Wash.

“When we started seeing the gluten-free trend happen a decade and a half ago, it was really in part a reaction, and it continues to be a reaction against highly processed, industrialized products that are made with industrialized flour,” Ms. Abbott said. “Fast forward a few years, and we start to see other diets come to the fore, like Whole30 and paleo, that leverage this notion that highly refined carbohydrates, particularly grains, were not good for you, and that included gluten.”

The International Food Information Council Foundation’s 2019 Food and Health Survey showed 6% of respondents said they were following a gluten-free diet, which was unchanged from the prior year. Consumer sentiments surrounding gluten have evolved, said William Roberts Jr., senior food and drink analyst at Mintel, Chicago. He noted gluten-free market growth has slowed from the high-double-digit rates sustained a few years ago.

Early adopters of gluten-free eating — excluding those who must eliminate gluten for medical reasons — have discovered the diet has not necessarily delivered the health or weight loss benefits many initially expected.

“The mainstream consumer who has been on some form of a health journey is aware now that just because it says it’s gluten-free doesn’t mean it’s healthy,” Ms. Abbott said. “We realize now that avoiding gluten isn’t going to make you a thin millionaire. It’s not going to solve all your problems.” 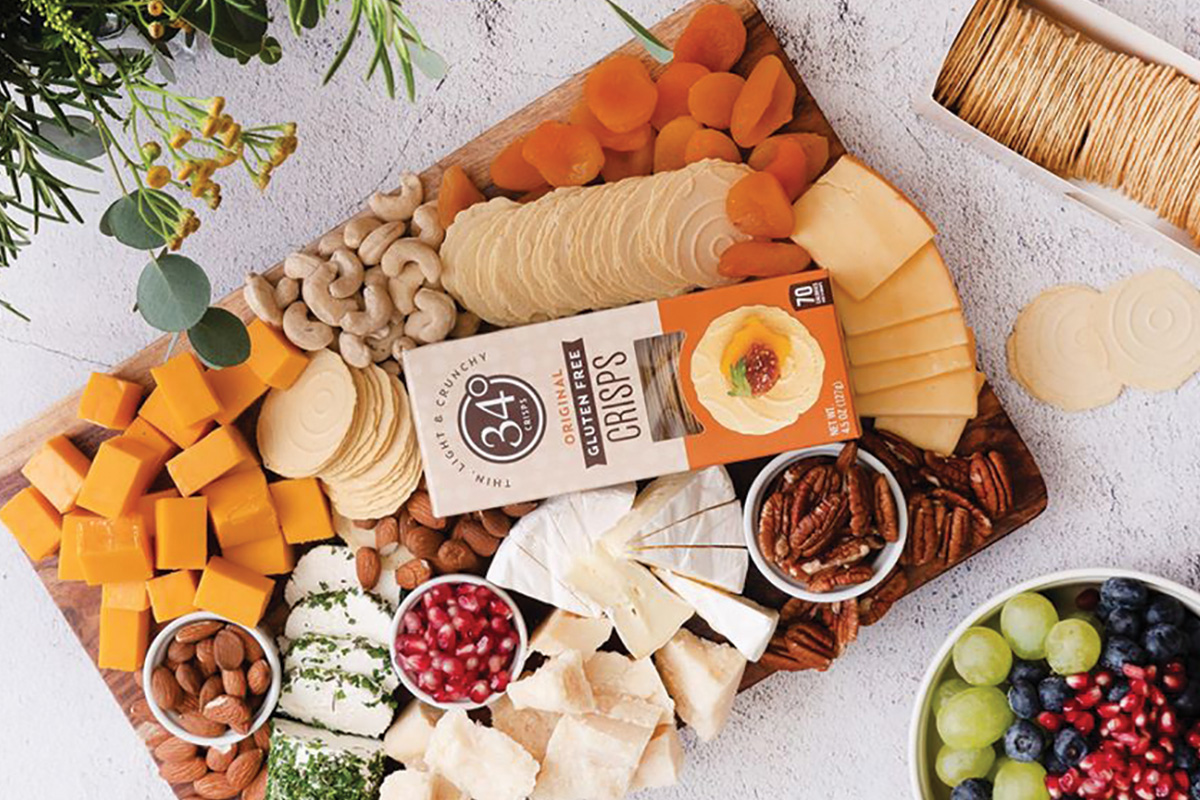 Game on for garbanzos

Gluten-free products introduced a few years ago were commonly formulated with rice flour, potato starch and corn starch, which are high in carbohydrates and lack nutrients such as protein and fiber, said Mike Hallman, vice-president of sales at Agspring, L.L.C., Leawood, Kas. Newer formulations boast protein, fiber and other nutrients.

“We’ve been encouraging the usage of pulses or grains such as buckwheat or quinoa or teff to enhance the product nutrients,” Mr. Hallman said. “People are looking for plant-based products and better nutrition.”

“If you are going to use a garbanzo flour, this would be a better alternative because it brings a milder flavor,” Mr. Hallman said. “Roasted garbanzo flour offers less ‘legume-y’ flavor … but you’re getting nutty, roasted notes.”

The roasted garbanzo bean flour also has demonstrated several functional benefits, including a higher loaf volume in bread when compared to other gluten-free flours, Mr. Hallman said. When used as a one-to-one replacement for whole wheat flour to boost the protein and fiber in a chocolate chip cookie recipe, the roasted garbanzo bean flour required no additional gums or binders.

Chickpea flour is predicted to surge in popularity in the coming years, said food trends forecaster Elizabeth Moskow. Already appearing in sweet and savory spreads, snacks and more, garbanzo beans are now breaking into the bakery segment. Flatbreads and pizza crusts formulated with chickpea flour are expected to expand beyond Europe to American freezer cases and restaurant menus.

“Typically where we’ve gotten traction on this so far has been baked products, but we do think it can be used in other applications such as snacks,” Mr. Hallman said.

A new snack featuring chickpea flour launched earlier this year from Denver-based 34 Degrees, a maker of thin, crispy crackers. The company added its first gluten-free option, made with steamed chickpea flour. Steaming inactivates the enzymes, stabilizes the protein and oil, resulting in a pleasant, neutral flavor, according to Natural Products, Inc., a Grinnell, Iowa, supplier of steamed chickpea flour.

“For years we’ve received requests for a gluten-free version of our crisps from consumers,” said Craig Lieberman, founder and president of 34 Degrees. “We knew when we launched into gluten-free, it would have to taste amazing first and foremost but couldn’t lose the undeniably light and crunchy texture that people love 34 Degrees for.” 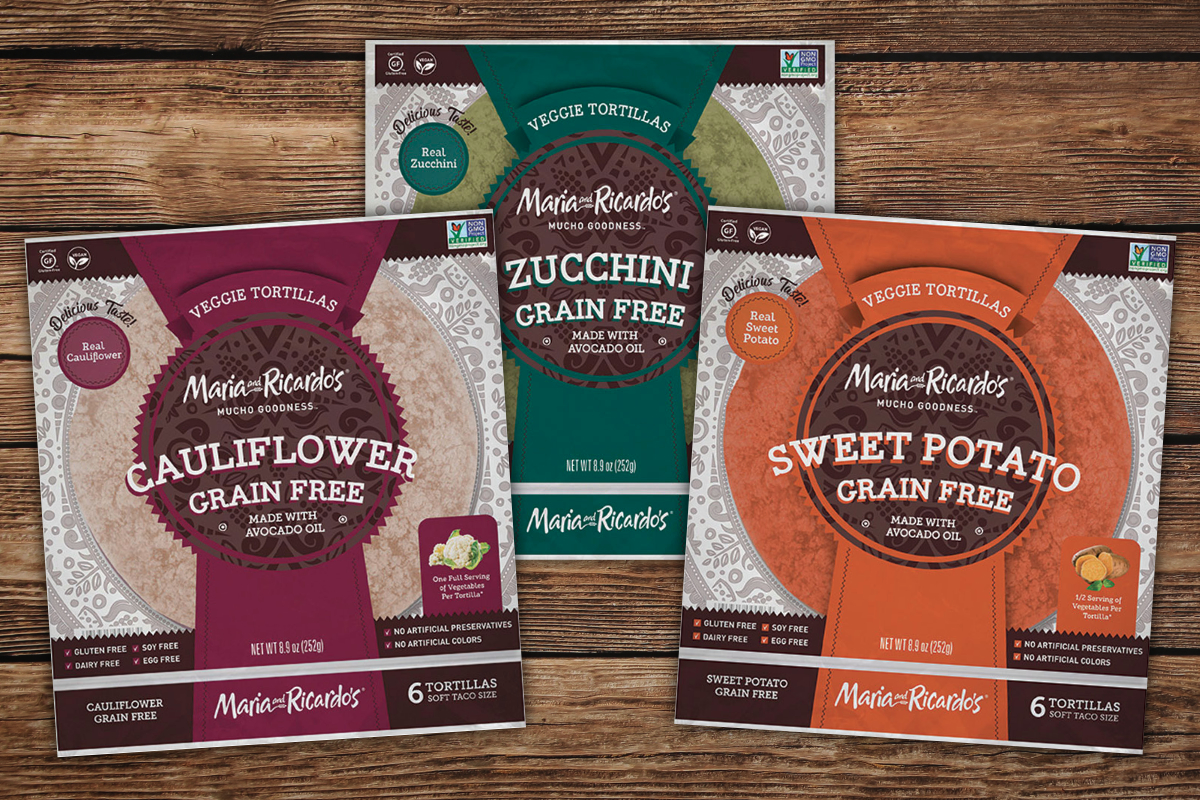 Other alternative flours, including tigernut and banana, are forecast to trend next year, according to a report from Whole Foods Market, Austin, Texas. The retailer predicted trending flours, including cauliflower and teff flour, may appear in the bulk and baking aisles and cited packaged products, including tortilla chips made with tigernut flour and pastries made with a blend of seed flours, including flax, sunflower, pumpkin, chia, hemp and poppy seeds.

“We can expect to see more nut and seed flours, as well as things like tigernut flour, which has a lot of prebiotic fiber, cassava and other root vegetables, as well as vegetable flours like cauliflower, butternut squash, pumpkin and sweet potato,” Ms. Abbott said. “We’re going to see more and more interesting colors that are coming from whole vegetables and impart more flavor and nutrition. That’s what we’re seeing on the horizon.”

Vegetables are cropping up in new gluten-free formulations, including a pizza crust featuring broccoli, pasta noodles featuring lentils and zucchini, and crackers made with cauliflower and butternut squash. A new line of tortillas from the Maria and Ricardo’s brand contain cauliflower, zucchini or sweet potato.

“Our new grain-free veggie tortillas are made with the finest ingredients, including real vegetables, which packs them with amazing flavor and texture,” said Ezequiel Montemayor, chief executive officer of Harbar, L.L.C., Canton, Mass., the maker of Maria and Ricardo’s tortillas. “Paired with your favorite filling, they’re a delicious way to add vegetables to any meal, especially for consumers looking for gluten-free or grain-free alternatives.”

Uplift Food, a New York start-up backed by Mondelez International, Deerfield, Ill., introduced Gut Happy Cookies made with toasted lupin and tigernut flours. (Tigernut is not a nut, despite the name, but a small tuber high in prebiotic fiber, iron, potassium and other vitamins and minerals). 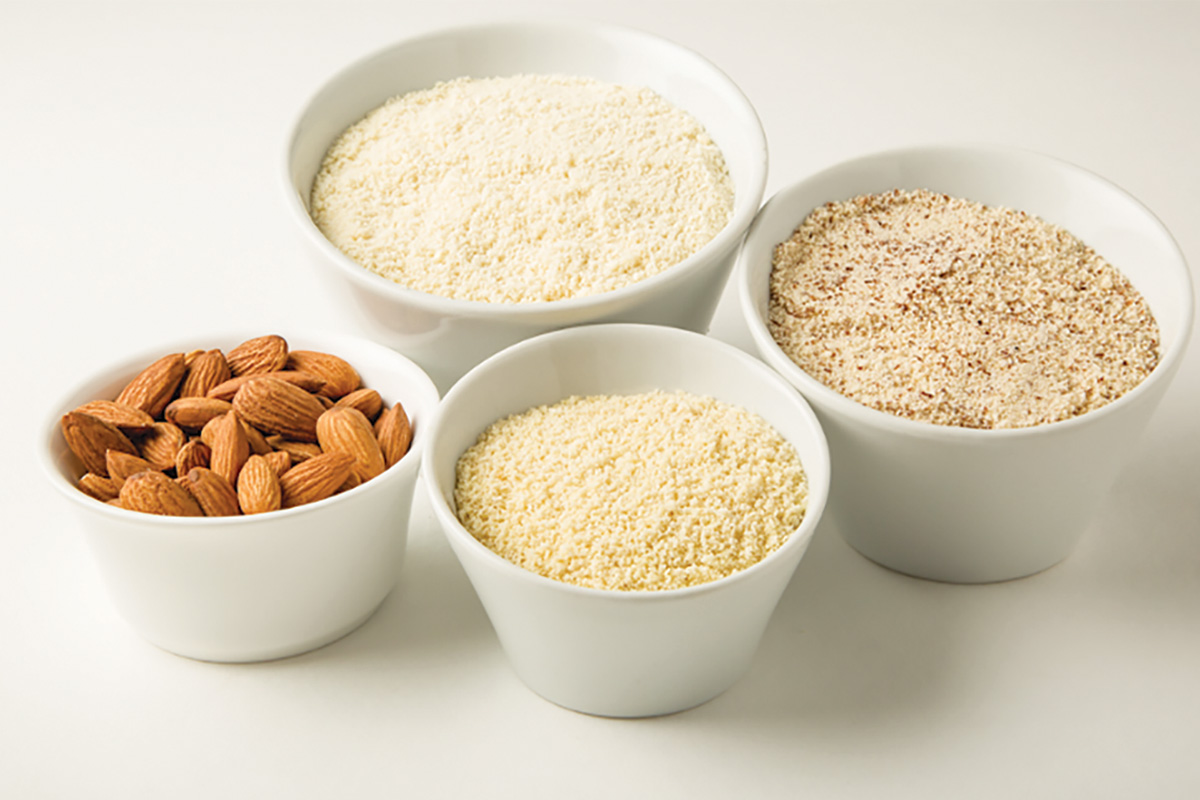 “Gluten-free breads and baked goods are one of the most popular product categories for almond flour, and we also see new gluten-free developments that focus on convenience, like bars and other grab-and-go snacks, that are leveraging almond flour,” Mr. Smith said.

“The ingredient is perfect for both baking and cooking and can be used in a wide array of applications, including cakes, bread and muffins, as well as cookies, bars and crackers,” Mr. Smith said. “It can also be used as a thickener for sauces and soups, a batter for frying or as a replacement for breadcrumbs in dishes like oven-fried chicken or eggplant parmesan.”

“There are a few differences that food manufacturers must be aware of when baking and cooking with almond flour,” Mr. Smith said. “Generally, almond flour cannot be substituted cup-for-cup for traditional flour in baking applications. Because almond flour does not absorb liquid the same way as traditional flour, more almond flour will be required to thicken the recipe. The best way to start is by adding the amount of flour called for in the recipe and then slowly adding in more until the batter has reached the desired stiffness.

“As a rule of thumb, fats and oils should also be reduced by approximately 25% when baking with almond flour, as the flour itself has a higher fat content than traditional flour. Sugar may also be reduced by about 25% in baked goods because almonds have a naturally sweet flavor. Cook times may need to be increased approximately five minutes because of the extra moisture present in almond flour.

“Additionally, because there is no gluten to serve as a binder, almond flour batters and doughs can need a bit of firming up. Egg whites are a great binder that doesn’t change the flavor of a recipe. For an extra light texture, beat the egg whites with some of the sugar called for in the recipe to form a meringue. This will provide a sturdy mixture to lightly fold into your recipe.” 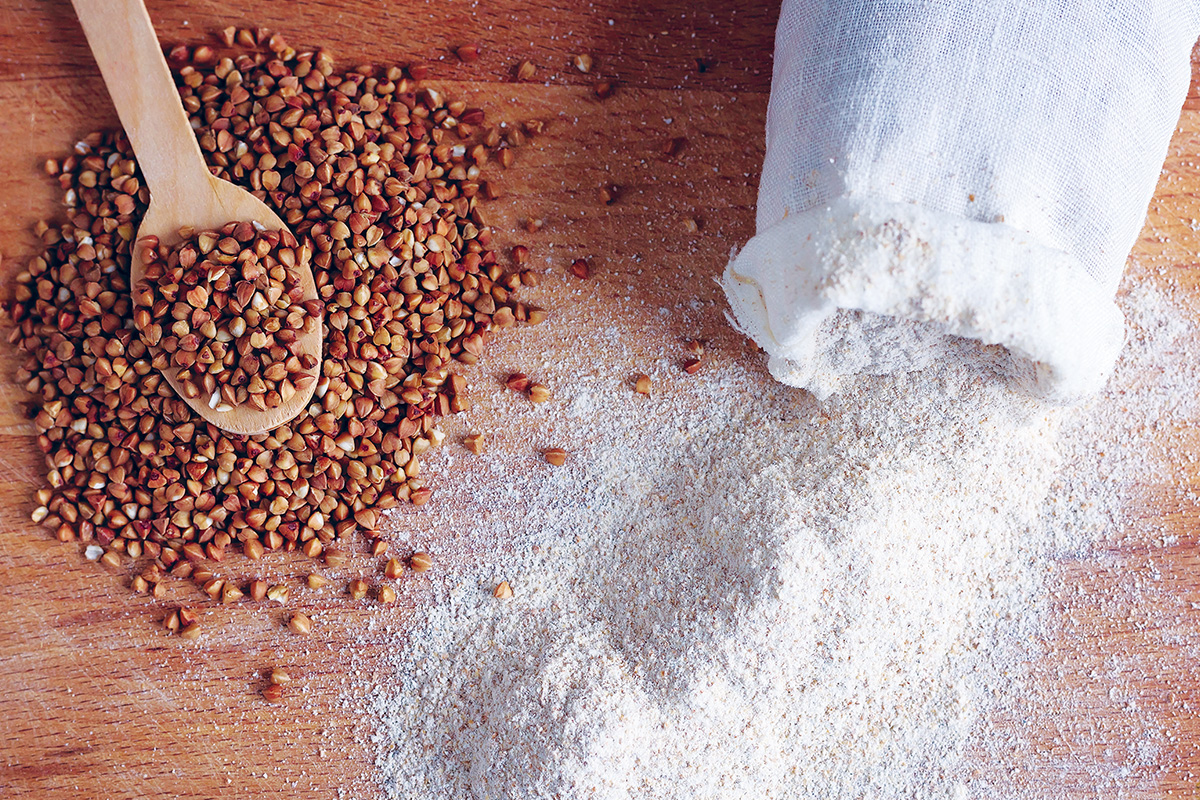 Another gluten-free flour packing a nutritional punch is based on buckwheat, which is rich in high-soluble fiber, protein, manganese, magnesium, copper and zinc, Mr. Hallman said.

“The fact buckwheat has excellent nutritional content compared to other legacy gluten-free flours and double the protein of rice flour alone should get product developers’ attention,” Mr. Hallman said. “When you then consider the versatility of buckwheat can lead to so many uses, it becomes even more compelling.”

Buckwheat flour does not present the processing challenges and allergen concerns of nut flours, he added. Additionally, it may be used in larger amounts within a formulation than many other ancient grain flours such as amaranth, quinoa, teff and millet. When roasted or toasted, buckwheat provides a new flavor profile beyond its inherent nutty notes.

“We believe C.P.G.s are just scratching the surface with what can be done with buckwheat,” Mr. Warner said. “Nutrition bars, crackers, cereals, side dishes, prepared meals and vegetarian products can all benefit from buckwheat.”