We use cookies to provide you with a better experience. By continuing to browse the site you are agreeing to our use of cookies in accordance with our Cookie Policy.
Home » Stevia’s sweet trajectory

Steviol glycosides still are extracted from the stevia leaf, just like a decade ago, but thanks to novel processing techniques steviol glycosides now may involve materials like sugarcane syrup yeast and baker’s yeast to increase supply of sought-after Reb M and Reb D. Regulatory approval has come in several international markets, too, expanding geographic reach.

All of this expansion has increased the number of product introductions containing steviol glycosides as well as sales of those products. Globally, new product launches that mentioned stevia increased 13% per year on average from 2014 to 2018, according to Innova Market Insights, Arnhem, The Netherlands.

“Stevia grew so fast so long,” said Lu Ann Williams, director of insights and innovation for Innova, in a Nov. 20 webinar. “It’s still continuing to grow in usage every year.”

PureCircle, a stevia-based sweetener supplier with a U.S. office in Chicago, cites Mintel data showing the number of new beverage product launches containing stevia increased 36% in 2018. The increase was 27% for food launches. The number of food and beverage launches containing stevia in 2018 accounted for 29% of all food and beverage launches that contained high-intensity sweeteners, which compared to 10% in 2011.

Cargill, Minneapolis, was instrumental in the Food and Drug Administration accepting the Generally Recognized As Safe (GRAS) status of Reb A for use as a sweetener in foods and beverages in December 2008. Several other steviol glycosides since then have gained GRAS status, and Cargill’s innovation in the field has continued.

New global product launches mentioning stevia have increased 13% per year on average from 2014 to 2018.

The company early in 2020 plans to commercialize ClearFlo, a botanical extract, said Andy Ohmes, global director of high-intensity sweeteners for Cargill. ClearFlo has beneficial flavor properties, and it aids in the dissolution of steviol glycosides and enhances long-term solubility, he said. It allows formulators to use steviol glycosides in highly concentrated formulations, creating solutions of up to 30% stevia, which is an increase of up to 150 times when compared to stevia alone, he said.

“While stevia is easy to use in beverages, limits to the sweetener’s solubility made it difficult to use in concentrated applications such as coffee and beverage syrups, flavor-enhancing concentrates, fountain drinks and fruit preps,” Mr. Ohmes said.

“We’ve invested more than 300,000 hours to unlock the secrets of the stevia leaf and bring great-tasting next-generation sweetener solutions to the marketplace,” he said.

Truvia stevia extracts, launched in 2008, contained traditional Reb A steviol glycosides that have been shown to replace up to 30% of the sugar in a beverage. ViaTech extracts, introduced in 2014, allow for deeper sugar reduction, up to 70%.

EverSweet, introduced in 2018, involves the fermentation of baker’s yeast to create Reb M and Reb D, two steviol glycosides offering a heightened sweetness and taste that are similar to sugar, in a more cost-efficient manner. EverSweet enables up to 100% sugar replacement, Mr. Ohmes said. Eversweet provides sweetness without bitterness or a licorice aftertaste, delivering a more rounded taste profile with a faster onset of sweetness, he said.

Cargill and Royal DSM, Heerlen, The Netherlands, own a joint venture called Avansya that in November began producing EverSweet at a new commercial scale facility in Blair, Neb. Cargill will operate the $50 million, 10,000-square-foot facility.

The stevia leaf continues to be a main source for extracting steviol glycosides.

“There are many different types of stevia molecules (Rebs) in the plant that all possess slightly different sweet flavors,” said Luca Giannone, vice-president, sales and marketing for SweeGen, Inc., Rancho Santa Margarita, Calif. “Reb A is one of the most abundant molecules. It pioneered the stevia industry, and it is still widely used today, even though it imparts a slight aftertaste of its own. The challenge to mask the aftertaste can be mitigated by balancing flavor and Reb A together for the desired taste.

“The progression in the stevia sweetener industry led to the next generation of highly sought-after and best-tasting molecules like Reb M, D and E. These molecules exist in very small quantities in the stevia plant, making purification challenging until SweeGen developed its patented bioconversion technology for producing these clean sugar-like sweet ‘next generation’ stevia-based sweeteners.”

“Bestevia e+ is very functional for product manufacturers because it delivers a delicious clean sugar-like taste and finish without the calories and aftertaste,” said Katharina Pueller, director, natural sweetener business for SweeGen.

The sweetener motivated the company to create Bestevia taste solutions, she said.

“The solution platform is built on a strong stevia foundation and is enhanced with SweeGen’s creative building blocks,” Ms. Pueller said.

Bestevia Reb M and Reb D stevia sweeteners have been shown to replace up to 100% of sugar, fructose or artificial sweeteners in applications, she said.

“They perform with a clean, sugar-like sweetness,” Ms. Pueller said.

SweeGen has received good regulatory news throughout 2019. The company in June reported the F.D.A. had issued a “no objections” letter to the company concerning the GRAS status of Reb E, one of the main components in Bestevia e+. Health Canada soon after said SweeGen’s Reb E met all regulatory criteria in its list of permitted sweeteners of steviol glycosides, which means it may be sold in Canada. 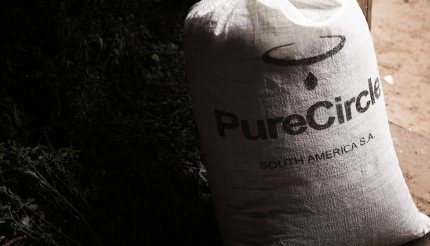 PureCircle this year said it has a Chinese patent directed to its proprietary process for scaling production of its Reb M stevia leaf sweetener. The company has expanded the use of a new stevia leaf variety that provides advantages when compared to previous generations of stevia plants, the company said in early November. The new stevia variety yields greater quantities of “next generation” stevia ingredients. This year 20% of PureCircle’s stevia plants comprised the new variety. Next year the company plans to switch 90% of its stevia crop to the new variety.

Instead of the stevia leaf, Amyris, Emeryville, Calif., mixes non-bioengineered/non-G.M.O. sugarcane syrup with yeast and through a formation process produces Reb M at commercial scale. The fermentation-based process has a low land-use impact, according to the company, which markets the sweetener under the Purecane brand. Amyris and ASR Group, a cane sugar refiner, have a supply and distribution agreement for the zero-calorie sweetener. Brands owned by ASR Group include Domino sugar and C&H sugar.

“We now have several of the largest users of stevia in Latin America converting to our sustainable best-tasting Purecane sweetener with the first orders now received, and we have also gained significant traction as a sweetener for use in flavor formulations,” said John C. Melo, president and chief executive officer of Amyris, in a Nov. 7 earnings call. “In North America, we have great interest and early sales from innovators. These are smaller brands that are disrupting the industry leaders with brands and products that consumers are switching to. We have also advanced to the negotiation stage with leaders in specific vertical markets from nutrition to bakery that will become key drivers of our future revenue in sweeteners.”

Several partnerships exist in the steviol glycoside industry as well.

London-based Tate & Lyle, P.L.C. is partners with Sweet Green Fields, Bellingham, Wash. The partnership last year launched Optimizer Stevia 4.10 and Intesse Stevia 2.0, both no-calorie sweeteners extracted from the stevia plant. Optimizer Stevia 4.10 is designed to benchmark with RebA 99 and RebA 100 at a more cost-effective price. Intesse Stevia 2.0 provides elevated levels of sugar reduction with a lower cost in use than other premium stevia sweeteners.

Ingredion is a supplier of SweeGen stevia sweeteners.