The year in packaged foods innovation

Households headed by adults under age 25 are 29% more likely to eat shelf-to-microwave dinners and 26% more likely to eat frozen breakfast entrees/sandwiches, according to the report “Looking ahead to Gen Z: Demographic patterns and spending trends” released in February by Packaged Facts, Rockville, Md. These adults have a 23% greater likelihood of eating frozen TV dinners. They are 10% more likely to eat dry packaged dinners, dinner mixes and kits.

“Seemingly perpetually in motion, ubiquitously surrounded by limitless smartphone entertainment options and frequently willing to work multiple jobs or side gigs, many Gen Z young adults are attracted to easy-to-prepare meals as well as snacking,” said David Sprinkle, research director for Packaged Facts. “Therefore, there exists ample opportunity for food marketers of frozen prepared meals, canned soups, potato chips, and other canned and packaged prepared food such as salads and desserts to convert adults under the age of 25 into loyal lifelong customers.”

New York-based CB Insights, a tech market intelligence platform, listed frozen foods as one of 12 industries that will thrive thanks to millennials. In 2017, millennials spent an average of 9% more on frozen foods per trip to the grocery store than households of other demographics, according to CB Insights. In 2018, the total volume of frozen foods sold in the United States increased for the first time in five years, driven largely by millennials and people with children.

Millennials appreciate convenience as they often eat on the go, according to CB Insights. They seek healthy frozen food and are more likely to prefer organic food and plant-based food.

“They value convenience, but they also value purity in the food supply, and they are increasingly seeing frozen as a pathway to that purity,” he said March 28 in Chicago at the inaugural Trends and Innovations Seminar, sponsored by Sosland Publishing Company and presented by Food Business News.

U.S. frozen food sales grew in dollar sales, up 2.6%, and units, up 2.3%, in 2018, according to the report “The power of frozen 2019” released by the American Frozen Food Institute, Arlington, Va., and the Food Marketing Institute, Washington. This year looks promising as well.

Vegetables were part of innovative efforts in 2019 among brands such as Birds Eye and Green Giant. 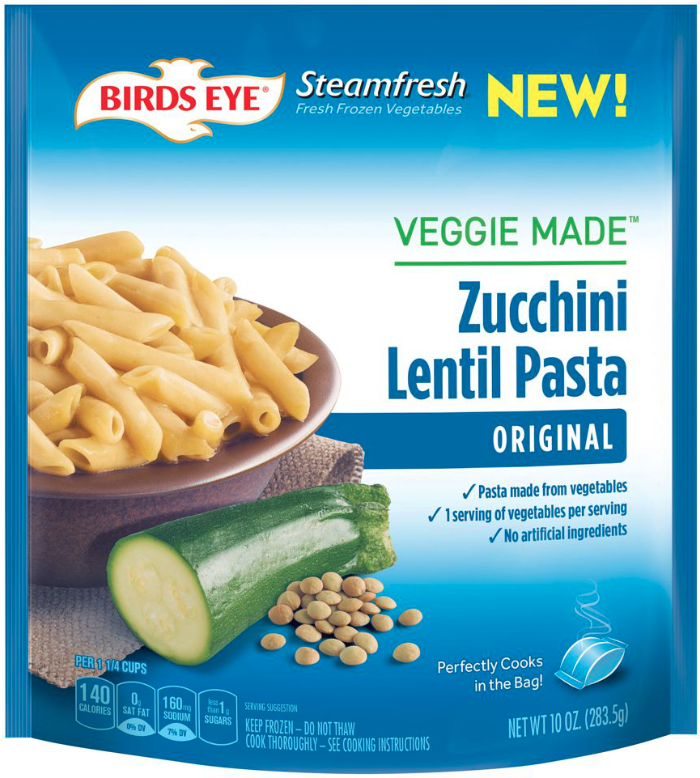 “We expect Birds Eye performance to accelerate in the second half (of the fiscal year) as we see the impacts of our reasonably launched innovation slate as well as upcoming new product introductions, including spiralized zucchini,” said Sean M. Connolly, president and chief executive officer of Conagra Brands, in a Sept. 26 earnings to call to discuss first-quarter financial results. “As one of the largest brands in frozen vegetables, we’re confident that Birds Eye is well positioned to capitalize on contemporary forms and trending flavors.”

“Our vision for Green Giant is not just to do frozen vegetables and shelf-stable vegetables, although we’re going to continue to innovate in those areas, but our vision is to make Green Giant the plant-based, vegetable-forward brand of the future: that we’re not just making vegetable products but products made from vegetables,” said Kenneth G. Romanzi, president and c.e.o. of B&G Foods, in a Sept. 4 presentation at the Barclays Global Consumer Staples Conference in Boston.

“We’ve committed to a full swing on this business,” said Mark A. Clouse, president and c.e.o. of Campbell Soup, in an investors day on June 13.

The company in 2019 began a three-year plan to invest in soup.

“So 2020, I think getting those fundamentals fixed, getting pipelines developed for innovation, you’ll begin to see the impact of some of the investment as the trajectory improves on share, sales and margin, maybe not too bright, but certainly improvable from where we are today, and then as we go into ’21, that innovation really begins to flow,” Mr. Clouse said. “We’ve got a stronger network (in 2021), and our investment is now proven. We’ve tested, used R.O.I. (return on investment) to optimize it, and I would expect to be more stable on sales and margin, improving share.”

Campbell Soup in 2020 plans to promote bone broth with nine grams of protein per serving. It will be positioned as an afternoon beverage or snack replacement, Mr. Clouse said.

In other soup news, Mealtime Stories launched refrigerated soups under the O, That’s Good! brand. Retailers give packaged soup shelf space in the center-of-store ambient aisle and increasingly in the refrigerated deli department, according to the “Soup in the U.S.” report released in June by Chicago-based Mintel.

“To reassure consumers and gain their trust, brands are being forthright about the ingredients, production processes and supply chains used to make and distribute their products,” said Billy Roberts, senior food and drink analyst at Mintel. “Such transparency and explicit ingredient details should counter at least some of the products’ over-processed image.”

Wish-Bone was included in Conagra Brands’ purchase of Pinnacle Foods.

“Wish-Bone is one of the key legacy Pinnacle brands where we’re furthest along in strengthening the foundation,” Mr. Connolly said in the Sept. 26 earnings call. “As we’ve discussed previously, Wish-Bone was challenged by several issues: service, quality and the label change execution. We identified and took action fixing the service challenges, improving labels for better variety communication and also upgrading the product quality.”

Grand View Research, Inc., San Francisco, forecasts the global sauces, dressings and condiments market to grow at an annual compound rate of 4.8% and reach $181 billion by 2025. The rising popularity of international cuisines among young adults will boost category growth, according to Grand View Research, adding the demand for healthy on-the-go food products has propelled demand for sauces, condiments and dressings. Dips, with a forecast CAGR of 5.3% from 2019 to 2025, will be the fastest growing product segment.