We use cookies to provide you with a better experience. By continuing to browse the site you are agreeing to our use of cookies in accordance with our Cookie Policy.
Skip To Content
Home » Challenging year ends with mostly higher ingredient prices

KANSAS CITY — In a year fraught with weather and trade challenges, prices of most key ingredients and agricultural commodities will end 2019 higher than a year earlier, with sugar and dairy products leading the way. Recent progress toward a phase one trade agreement with China provided a push to grain and oilseed prices last week.

Trade issues perhaps were the most talked about market factor in 2019, and some had significant impact on ingredient prices (dry whey and lactose were lower due to the loss of exports to China while other dry dairy products were higher), weather most likely had the most profound impact.

Bulk refined sugar prices currently offered at 44c a lb f.o.b. were up 26% from a year ago and at seven-year highs due to major sugar beet crop losses from early freezes in the Red River Valley, the nation’s largest sugar producing region, as well as in the states of Colorado, Nebraska, Wyoming and Montana. Dry weather and an October freeze also reduced cane sugar production in Louisiana. U.S. domestic sugar production is forecast down 8% from 2018-19, with beet down 8% and cane down 3.5%, with spot beet sugar supplies lacking.

Grain and oilseed prices have been affected by a combination of weather and trade issues, although nearby prices for soybeans, the most talked about commodity in the trade war with China, were up 5% from a year ago due to recent progress in the trade deal and a 20% smaller crop from 2018. Despite the trade issues, soybean exports from Sept. 1 through Dec. 12 were up 23% from a year ago, albeit compared to a low volume due to trade issues last year. Nearby corn futures were up about 3% from a year ago with the crop down 5% from 2018 and thousands of acres still standing in fields mainly in the Upper Midwest. Gains in corn were limited by dismal exports, down 55% from last year as of mid-December.

Wheat prices were mixed with nearby Chicago soft red winter up 8% from a year ago but Kansas City hard red winter down 8% and Minneapolis hard red spring down about 4%. Overall wheat exports were strong, up 16% from a year ago for the June 1 to Dec. 12 period, despite strong headwinds from foreign competition and record global supply. Weather played a major role in wheat-by-class supply and pricing, with quality issues limiting the milling supply of soft red winter and hard red spring, while low average protein, also weather induced, lowered the value of hard red winter. 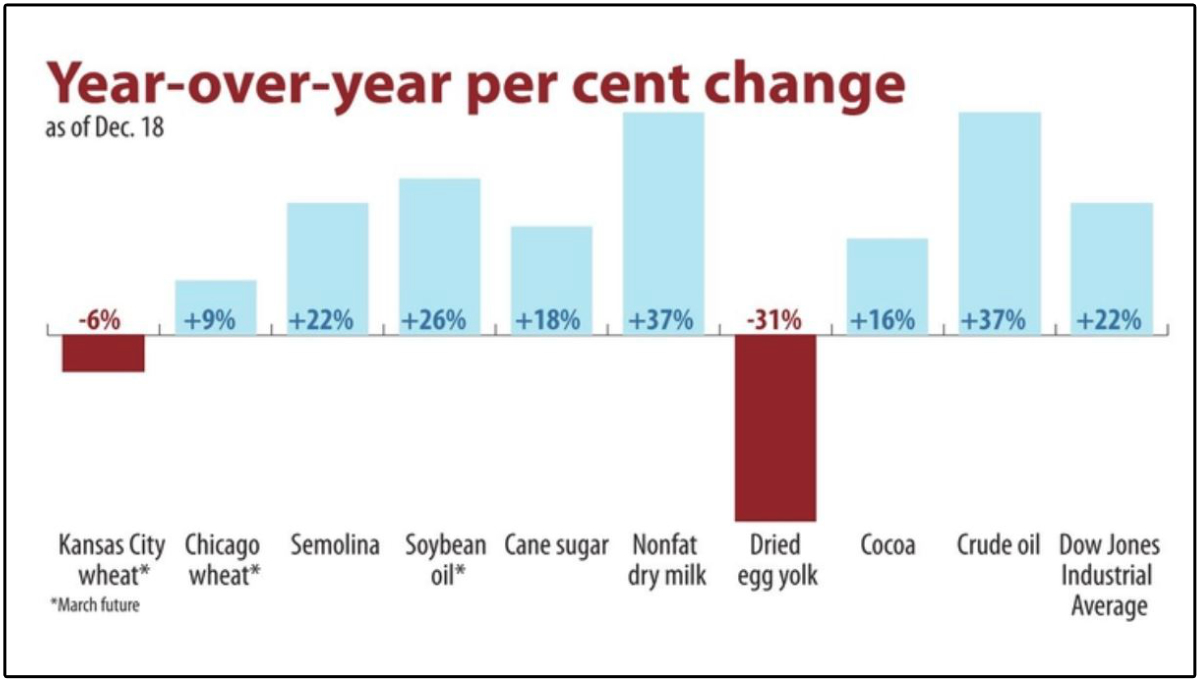 Most vegetable oil prices were up from a year ago, some sharply, amid tight domestic and global supplies. Cash soybean oil was up 13%, palm oil was up 41% and canola oil was about flat with China’s halt of Canadian canola seed imports making supply plentiful despite a smaller Canadian canola crop.

Prices for nonfat dry milk were up 37% from a year ago, with most other dry products also sharply higher in part due to good demand and stronger global values.

Dried egg product prices were down about 10% to 30% on the year due mostly to ample egg supplies most of the year.

Progress on trade, including congressional resolution on the United States-Mexico-Canada Agreement, provided a ray of hope and a boost to most markets late in the year. But there’s no reason to think 2020 will be any less “exciting” as trade issues remain and uncertainty from weather, a U.S. presidential election, economic concerns and geopolitical issues contribute to market volatility.