We use cookies to provide you with a better experience. By continuing to browse the site you are agreeing to our use of cookies in accordance with our Cookie Policy.
Home » Interest in sustainable food choices increases 23%

TEL AVIV, ISRAEL — Compared to a year ago, 23% more consumers in the United States are prioritizing sustainable food choices, according to a study released Jan. 22 by Tastewise, a food intelligence start-up powered by artificial intelligence (A.I.).

Health benefits accounted for 39% of people’s social interactions on sustainability although the number dropped 16% year over year.

“Although consumers are increasingly concerned about waste generally, they are still apathetic about the wastefulness of the animal agriculture industry — a leading cause of greenhouse gas emissions, water contamination, deforestation and a host of other environmental calamities,” the report said. “Meat is addressed in only 10% of waste discussion.” 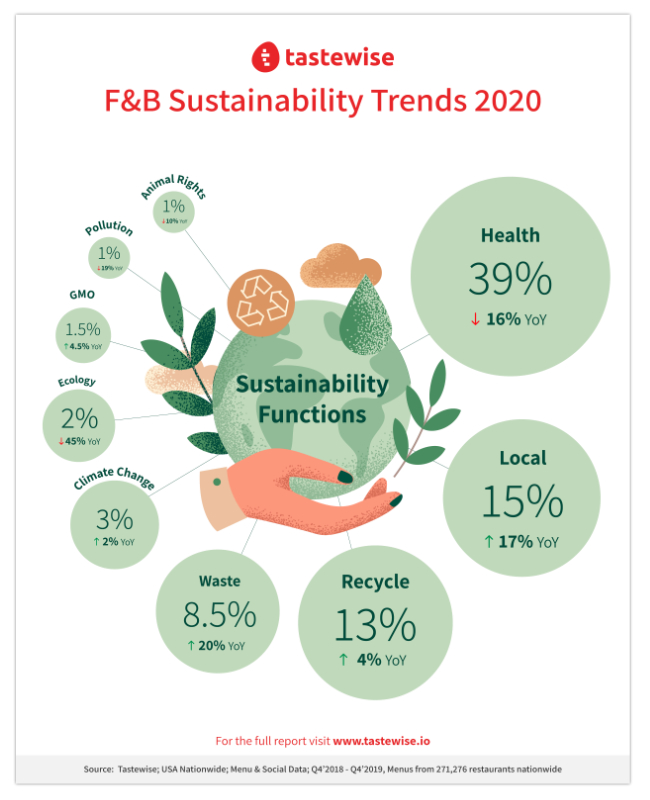 Only 1% of the online sustainable conversations discussed animal rights.

California accounted for 22% of restaurants in the United States that promoted sustainability while the state accounts for 12% of the U.S. population.

Tastewise defines sustainability as the practice of meeting the needs of the present without compromising the same ability for future generations.