We use cookies to provide you with a better experience. By continuing to browse the site you are agreeing to our use of cookies in accordance with our Cookie Policy.
Home » Swiss Rosti scaling rapidly

SAN FRANCISCO — Swiss Rosti, Portland, Ore., the start-up company founded by Stephen and Lory Caldwell in May 2018 has experienced rapid growth. The business has gone from its debut at the Winter Fancy Food Show in January 2019 to working with some of the nation’s largest retailers, including Whole Foods Market, The Kroger Co., Albertsons and Walmart, in 2020.

“I came to Incubator Village a year ago today here at the Fancy Food Show with 700 handmade rostis (pronounced roosh-ti), got best new product and ran out of them the last hour of the show,” Mr. Caldwell said Jan. 19 during an interview at the Winter Fancy Food Show.

Shortly after the event, the company reached agreements for its products to be sold in Whole Foods Market and a division of Kroger, said Mr. Caldwell, but he still didn’t have a co-packer to scale production to meet demand. The company began working with a co-packer in Texas later in the year.

The product that has caused such a stir is of Swiss origin and features shredded potato that may be filled with a variety of ingredients and then is fried. Swiss Rosti products are 75-grams, sold with four to a package and it is merchandised in the retail frozen food aisle.

Mr. Caldwell said the current line of products are natural, non-G.M.O., gluten-free and the current varieties are vegetarian.

“Because I hold a utility and design patent on a filled potato, the potato being the vehicle, we have an unlimited number of flavor profiles we can create,” he said. “Last week we created four more that will be rolled out in the next six months.”

One of the new varieties will be a bacon cheeseburger flavor and another is a croque monsieur. 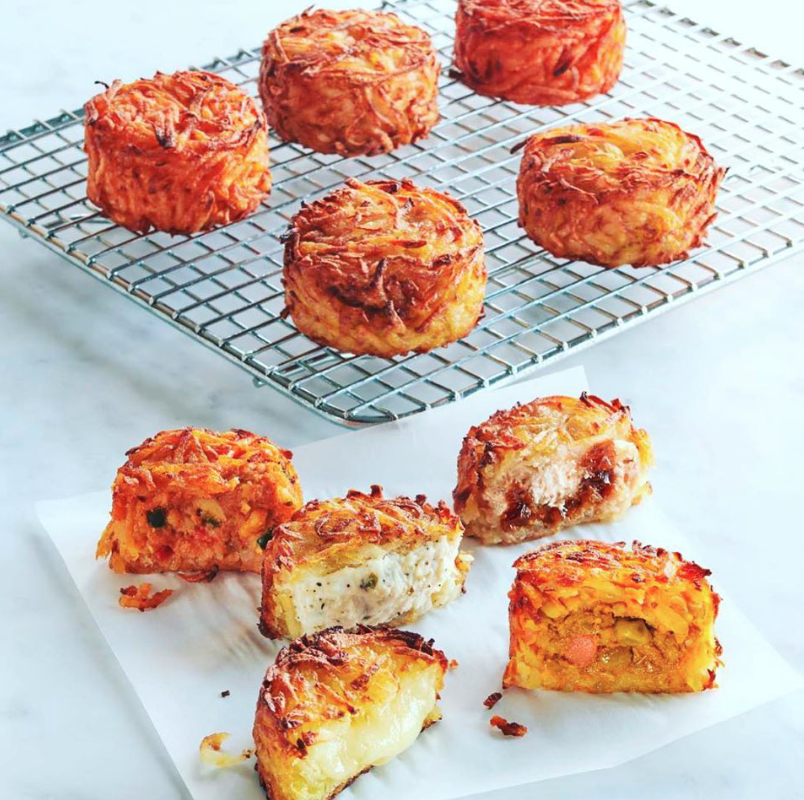 “It’s a European experience that is so lovely,” Mr. Caldwell said of the croque monsieur. “You can top it with a poached egg and a hollandaise sauce, and you’ve got rosti benedict.”

Plant-based varieties of the product are also on the drawing board.

“We’re going to check all of the boxes,” Mr. Caldwell said. “We’ve started something we just can’t stop and it’s so exciting.”

The company is working with Walmart, Bentonville, Ark., among other large chain stores and should have commitments moving forward later in the year. Swiss Rosti came to the retailer’s attention after it was included in Walmart’s Disruptor Specialty Food Series.

Mr. Caldwell said Swiss Rosti’s point of differentiation is one reason for the company’s rapid success.

“You can have tater tots, you can have hash browns, you can have french fries, but there is no filled potato,” he said. “Because of our I.P. (intellectual property) we can continue to protect that.”

Future innovation will include additional flavors and a 50-gram variety.

“There are now some national C-store chains that have committed to us,” Mr. Caldwell said. “Our product will be for grab and go, and the smaller version works perfectly in that format.”

Potatoes used by Swiss Rosti are grown in the Oregon/Idaho region, Mr. Caldwell said, and the company is in the process of contracting growing its own potatoes.

“If you had told me a year-and-a-half ago I would be contract growing my own potatoes, I’d have said that’s a tall task,” he said. “It’s been a wild ride.”