We use cookies to provide you with a better experience. By continuing to browse the site you are agreeing to our use of cookies in accordance with our Cookie Policy.
Home » Women underrepresented at senior levels of food and beverage manufacturers

Women underrepresented at senior levels of food and beverage manufacturers

CHICAGO —Women in the Workplace is a comprehensive study of the state of women in corporate America. Since 2015, LeanIn.Org, Palo Alto, Calif., a private foundation that helps women achieve their ambitions and works to create an equal world, and McKinsey & Company, New York, have published the report annually to give companies and employees the information needed to advance women and improve gender diversity within their organizations.

While the 2019 report found more women are becoming senior leaders, they are underrepresented at senior executive levels in the food and beverage manufacturing sector, said Irina Starikova, partner at McKinsey & Company, who spoke at the International Dairy Foods Association’s annual Dairy Forum held Jan. 26-29 in Phoenix.

Insights collected for the report from the more than 68,500 employees regarding their workplace experiences suggest that to fix the problem it’s important to invest and support entry level female employees who want to become a manager. That’s where the real problem lies. The broken rung is early in the career ladder, and black women and Latinas are more likely to be held back.

She said that since 2015, the first year of the study, there have been improvements in female representation at senior levels across all industries. In 2019, one in five (21%, which is up 24% from 2015) c-suite executives was female among the 329 companies that participated in the survey. In food and beverage manufacturing, that figure is 16%. There’s a similar gap between average female representation across all industries and that for food and beverage manufacturing at the senior vice-president level, while figures are similar earlier in the pipeline. Once past entry level, more men hold manager and higher executive positions than women.

Interestingly, older employees are not as aware of this gender discrepancy, neither are men. Ms. Starikova said younger employees are more likely to observe gender bias in the workplace and are twice as likely to raise the need for diversity and inclusion.

A key to changing the dynamics is recognizing gender bias. One in three women surveyed reported seeing biased behavior against women in the workplace, while only one in 10 men said they saw such behavior. If they don’t see it, in their eyes, there’s nothing to change.

Among all women in the workforce, their perception of bias varies by race and ethnicity. Sixty-nine per cent of white women said they have equal opportunity for growth, whereas 42% said there’s fairness of opportunity. The figures are lower for Asians (63%, 41%, respectively), Latinas (62%, 39%) and blacks (56%, 28%). 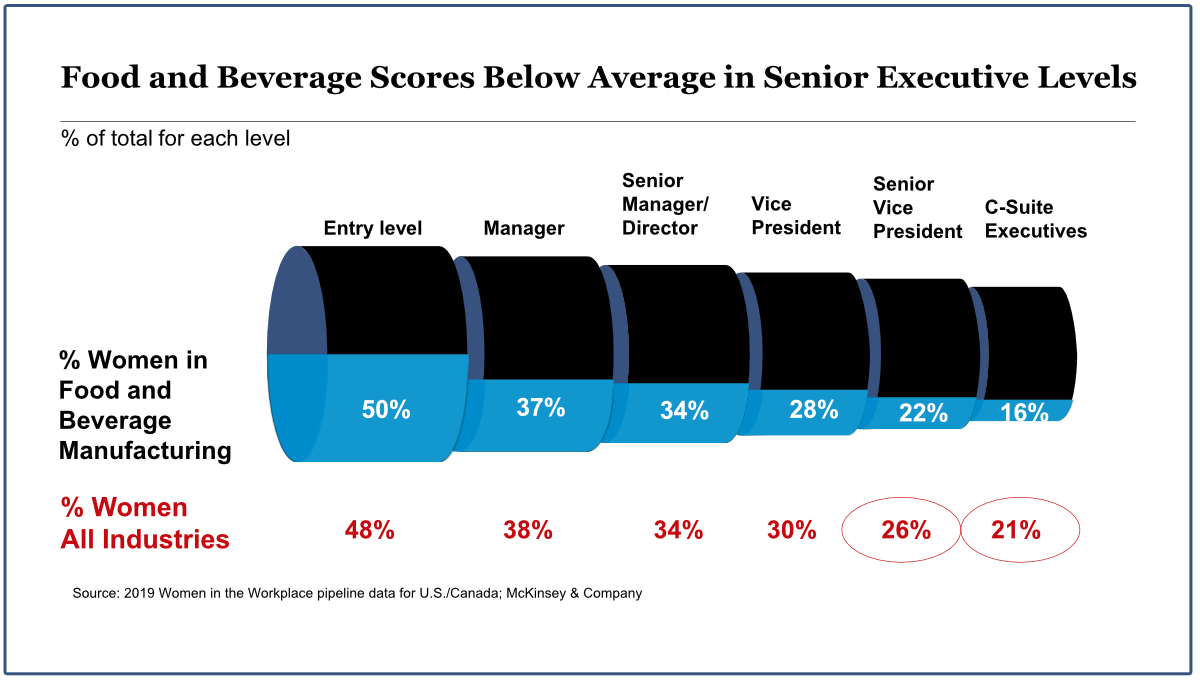 The report identifies five steps companies may take to repair their broken rung and ultimately their pipeline:

A more diverse workforce will lead to a more inclusive culture, according to the report. And when a company’s culture feels fair and inclusive, women and underrepresented groups are happier and more likely to thrive.

The report may be viewed by following this link.