We use cookies to provide you with a better experience. By continuing to browse the site you are agreeing to our use of cookies in accordance with our Cookie Policy.
Home » Donuts driving indulgent innovation

KANSAS CITY — Donuts can be eaten at any time, at any place and — these days — with just about anything. While the treat is still the perfect coffee pairing, now it’s also the bun on a chicken sandwich or a grilled cheese. Bakeries sell traditional cream-filled donuts and alcohol-infused donuts in their displays. And there has never been so many toppings from chocolate to cereal to pork.

These combinations keep consumers on the edge of their seats. What will be the next crazy donut flavor?

In the US from 2015 to 2019, the market size of the industry has increased 2% per year on average and is expected to grow approximately 1.2% in 2020, according to IBISWorld’s 2019 report “Doughnut Stores Industry in the US - Market Research.”

The international donut market is seeing a steady increase as well, and some bakeries have had major breakthroughs over the past several years. Barcelona-based Europastry, creator of Dots Originals thaw-and-sell frozen donuts, is a worldwide company. Carolina Moré, marketing director USA, Europastry, said Dots sales increased by more than 30% from 2017 to 2019 due to an evolution of quality and more innovation.

Creativity is driving the donut industry forward. Consumers can eat sweet or savory, old-fashioned or gourmet, yeast or gluten-free donuts. All these offerings have not only increased sales but also broadened the time of day in which the sweet good is purchased. According to a survey from Jackson, MI-based Dawn Foods, 87% of people eat donuts in the morning, 38% in the afternoon, 33% in the evening and 23% late at night. That’s why many shops are open 24 hours.

“Given the variety of roles and dayparts, consumers look for different qualities,” said Sally Lyons-Wyatt, executive vice-president and practice leader, IRI. “The qualities range from favorite flavors to surprising combinations; simple and clean to eat to complex and messy; and an accompaniment for a meal to being the meal.”

With consumers’ wide range of taste and texture preferences and bakeries rising to meet those demands, donuts are in high competition. “More now than ever, bakers need new, exciting offerings to break through in a crowded environment,” said Phil DeWester, senior director category marketing, Dawn Foods.

A mind-boggling flavor, creative style or specific ingredient could give a company the push it needs to have the next trending donut. 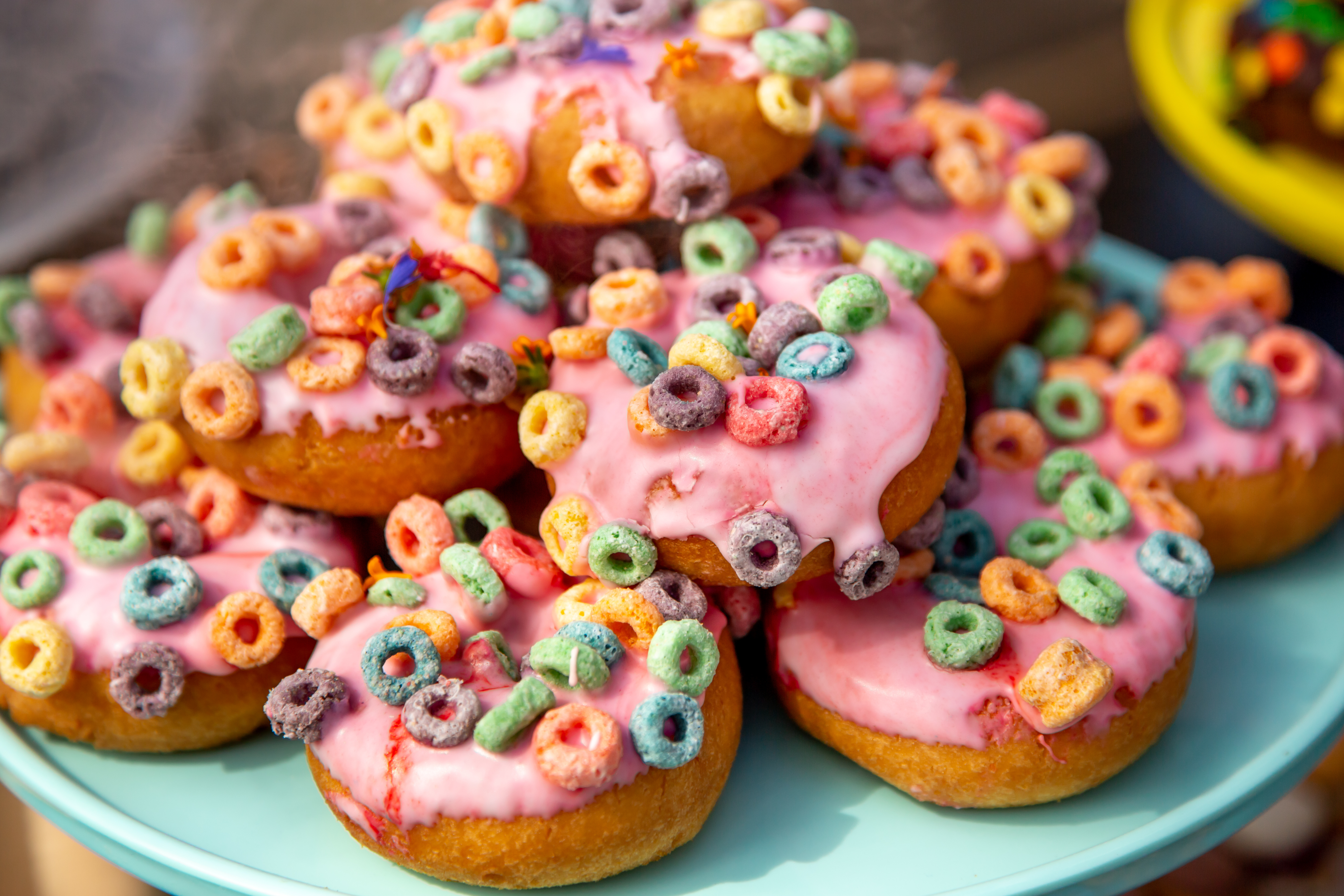 What’s in it? What’s on it? These are the questions consumers are asking when it comes to donut flavors.

“In our nearly 70-year history, our culinary team here at Dunkin’ has developed hundreds of varieties and flavors of donuts, some of which have remained on our menu as tried-and-true favorites and others that were special, limited-time offerings,” said Rick Golden, manager of donut excellence at Dunkin’, Canton, MA. “Our fans really enjoy when we experiment with unique shapes and flavor combinations, and our commitment to donut innovation is a key reason why we remain the category leader, and why our donuts continue to be so popular in the market.”

While the old-fashioned and other basic donuts are still crucial to the industry, the imagination of bakers has opened up an avenue of creativity. “Donuts have had an evolution going from traditional — glazed, chocolate-covered, sprinkles — to artisanal with the donut as the ‘carrier’ for toppings like bacon, fruit and others,” Ms. Lyons-Wyatt noted.

According to GlobalData, 49% of millennial and Generation Z consumers like to try new and unusual flavors.

Dawn Foods’ blog post “The Rise of Bakery,” highlighted five creations that are leading the gourmet trend. The cronut, a donut made from laminated dough like a croissant that’s fried and decorated, debuted in 2013 and can still be found at a variety of donut shops around the US. Additionally, the savory donut can be filled or accompanied by various meats like chicken or pulled pork or vegetables to create a full meal.

The cereal donut brings a nostalgic twist, according to Dawn Foods. Cereal is a popular sweet and textured topping as well as bacon, the fourth trending gourmet donut. Dataessential reported bacon on dessert menus increased 137% over the past four years, according to Dawn’s post. Lastly, the donut sandwich — filled with anything from ice cream to fried chicken — has its place among gourmet selections.

Customization is another emerging trend. “Our fully finished donuts can be customized depending on customers’ demands,” Ms. Moré explained about Dots. “Thus, each of our customers not only obtains differentiation from the competition but also exclusivity for their consumers who demand unique product.”

A feast for the eyes

Consumers enjoy posting photos of visually appealing food, and they typically get a lot of “likes” from other people who enjoy looking at it and want to try it. Today’s trendy donuts seem to be particularly photogenic. In fact, #donut has been used more than 3 million times on Instagram. “We are very proud of our donut heritage and the ability for our donuts to make people smile,” Mr. Golden said about Dunkin’. “Our guests love to talk about and take pictures of them and post online about their favorite flavor.”

The way a donut is presented in-store or online can be what draws a consumer to purchase a new style and flavor and can set a bakery apart from others. Creativity with detail is key.

Bakeries should also pay attention to pop culture. “While it’s important to be creative and unique, it’s also important to tap into trends to ensure your creations are relative to consumers,” Mr. DeWester said.

For the final season of Game of Thrones, Off Beat Donuts, Dublin, launched new products in Ireland including The Jam Snow, The Night King and Red Wedding Red Velvet. The treats also included eye-catching designs of characters and themes.

During football season, go with some team colors or football designs. Perhaps a certain type of animal or fruit is trending; then create it with a donut. Stand for a cause with the use of donut lettering or colors. Even if a bakery can’t offer a limited-time product for that trend, a visually appealing social media post can still achieve the memorable photo consumers are looking for from companies.

While no one would consider dough that’s deep-fried and glazed a healthy choice, consumers still seek qualities that make the donut more conducive to a health-focused lifestyle. For instance, bakeries are answering the demand for portion control.

In January, Krispy Kreme debuted Mini Doughnuts, which will be a permanent offering. The donuts contain less than 100-Cal and are available in Original Glazed, Chocolate Iced Glazed, Chocolate Iced with Sprinkles and Strawberry Iced with Sprinkles. “Too many people bail on their New Year’s resolutions before they are even halfway through January,” said Dave Skena, chief marketing officer for Krispy Kreme, Winston-Salem, NC. “That’s no good. Sometimes a mini-indulgence, or cheat, is all you need to help you stick with it. So, we miniaturized our most popular donuts. A little Krispy Kreme goes a long way.”

The 2019 growth drivers for donut sales were donut holes, according to Ms. Lyons-Wyatt. While they come powdered, chocolate-covered or glazed just like any other donut, the difference is their size, which provides a snack in an on-the-go format and portion control, she explained.

In addition to portion control, there are other health qualities that are gaining ground as well. Ms. Lyons-Wyatt has seen many claims such as “natural sweetener” or “calories per serving” resonate with purchasers.

To satisfy consumers not only through taste but also an ingredient list, Europastry makes Dots Original donuts with no preservatives or artificial flavors. The treats are also non-GMO, Roundtable on Sustainable Palm Oil certified and UTZ certified to provide sustainably sourced cocoa.

Protein donuts are increasing in popularity, especially as a replacement for bars. Startups founded by athletes and fitness gurus are leading the way. The Dough Bar, Fort Collins, CO, which is supported by a Shark Tank investor, opened in 2015; The Muscle Donut, Meridian, ID, debuted its baked and gluten-free treat in 2016; and Elite Sweets, Austin, TX, developed its “performance protein” donuts in 2017.

Diet-friendly options such as keto, vegan or gluten-free create opportunities for growth, Ms. Lyons-Wyatt said. Publications now share lists with consumers such as the top vegan donut shops or where to find gluten-free donuts in the area. Other donut shops have worked with formulations to include at least one offering for those with specific diet needs.

The battle between cake and yeast-raised donuts will continue, but there’s a new kid in town: sourdough. Although it’s taken some time, sourdough donuts are becoming a staple at many bakeries. In December, The New York Times published an article called “What Will We Eat in 2020? Something Toasted, Something Blue,” in which writer Kim Severson called out sourdough donuts. 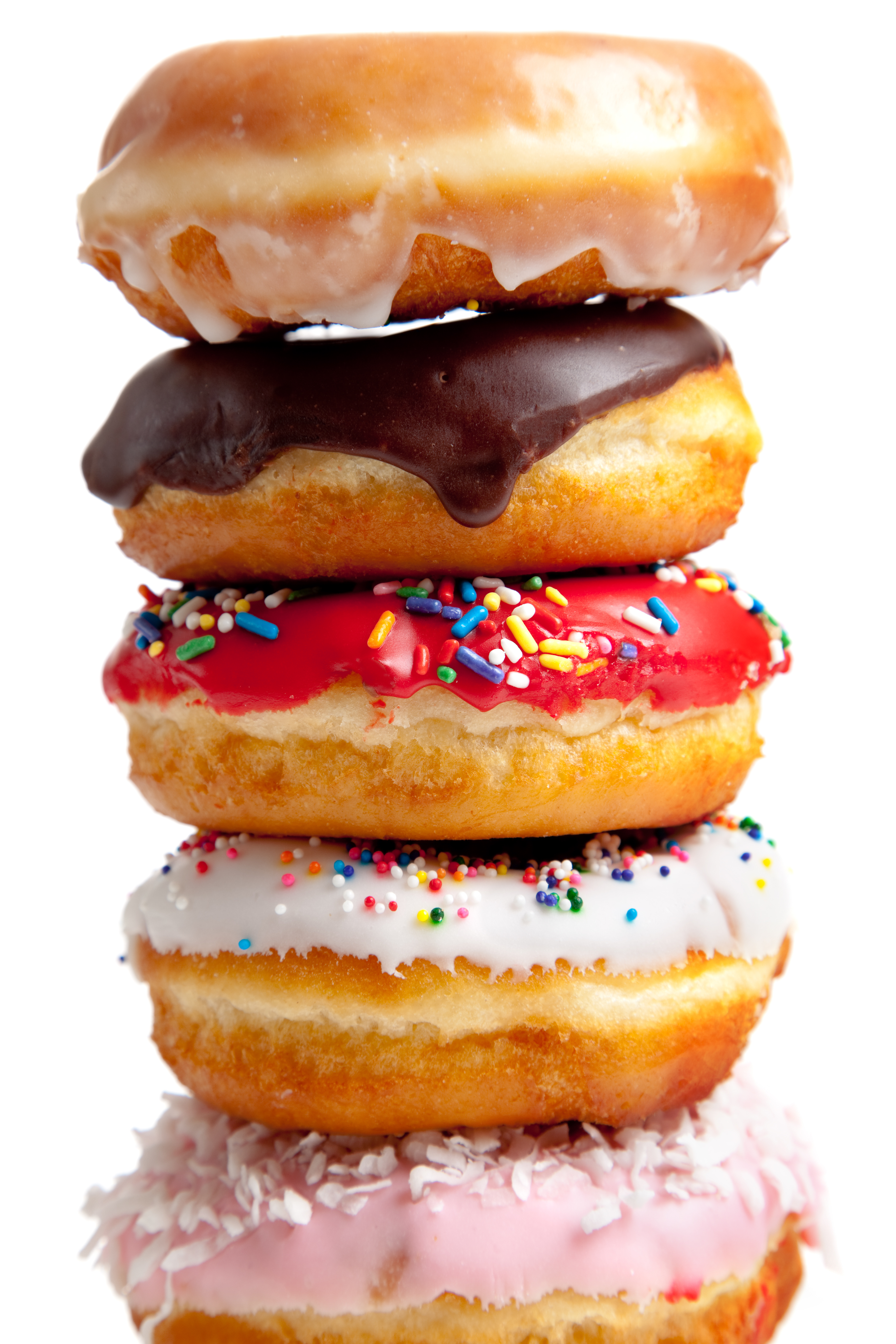 Looking to the future

The US donut market is expected to reach approximately $8.4 billion in 2020, according to IBISWorld’s 2019 report “Doughnut Stores Industry in the US - Market Research Report.” Just as donut sales have had a steady incline over the past few years, consumers will come into the new decade true to these traditional and modern creations.

“If donuts can continue to demonstrate their flexibility with assortments, flavors and types, then the future looks extremely bright,” Ms. Lyons-Wyatt said.

As a Kansas City chain, LaMar’s maintains its tradition of making from-scratch donuts while also looking for opportunities to branch out with innovation. “The future looks good, and LaMar’s intends to hold onto our reputation as a locally produced product that has neighborhood appeal,” Mr. Osifodunrin explained. “We plan to look at ways to open new stores and offer the LaMar’s donut to more people around the US.”

For companies like Dunkin’, hot and cold beverages are paired with its donuts. “By providing our guests with delicious products and innovative options throughout the year, donuts continue to grow as a category,” Mr. Golden said. “Along with being delicious, they are a tasty way to brighten someone’s day.”