NASHVILLE, TENN. — In April 1988, Neil Stern, now a senior partner with the retail consultancy McMillanDoolittle, Chicago, wrote “We may have seen the future…and we’re impressed.” This was in response to the first Walmart Supercenter opening in Washington, Mo., an event that changed grocery shopping and food retailing.

Speaking at the Annual Meat Conference, the annual trade show that brings meat processors and retail buyers together, on March 2, Mr. Stern said that in 1988, 90% of grocery stores were of the traditional format. Twenty years later, the figure falls to 44%, with non-traditional formats, such as supercenters, club stores and dollar-style formats having 40% share. To survive, suppliers and retailers must change the way they do business.

“In the past decade, retail has grown at a compound annual growth rate of 3.5%, with sales in 2019 nearly at $5 trillion,” Mr. Stern said. “You think everything must be great, right? Well, 2020 started with three retail bankruptcies: Fairway, Lucky’s and Earth Fare.”

“The retail industry is in a state of extreme disruption, with the rise of millennials, urbanization, digitalization and Amazon,” Mr. Stern said. “And while online is grabbing a bigger share of overall retail sales, food and alcohol is what brings total online sales down.”

It was only 2% in 2016 and is projected to be 5% in 2021. But, he emphasized, it’s rapidly accelerating with the changing consumer face. Amazon Prime is driving the change with membership having tripled to 150 million users between 2015 and 2020, with Prime members having spending power and attracting higher income households. But lower income households crave the convenience of online grocery shopping, too. Retailers such as Walmart are responding with their own pick-up at store solutions. By 2025, 14% of food and alcohol sales are projected to be made online, with click-and-collect and drive-up fulfillment centers fueling much of the growth.

The other 86% of food and beverage sales will be made in brick-and-mortar formats; however, he said drastic changes in what supermarkets look like are on the horizon. Expect more automation, reduced human interaction and more foodservice platforms inside the stores.

“People are eating out more,” he said. Retailers must respond.

“It’s the treasure hunt,” Mr. Stern said. “It’s finding something you did not expect. Value is the driver. Costco is a treasure hunt and so is private label.”

It is about being the cheapest retailer with the lowest sustainable costs; providing an environment centered around discovery and newness; and creating compelling alternatives to major brands that customers trust.

“Aldi is the retail elephant in the room,” Mr. Stern said. “The company expects to have 2,500 stores by 2022. It’s expanding and growing current stores and creating a fresh-forward format to attract new shoppers.

“Low prices don’t have to mean low excitement. Private label is very likely to grow much faster than conventional.”

The second area of brick-and-mortar disruption is extreme convenience. That is what consumers are getting from online shopping. To keep them coming to the store, the experience needs to be more enjoyable. 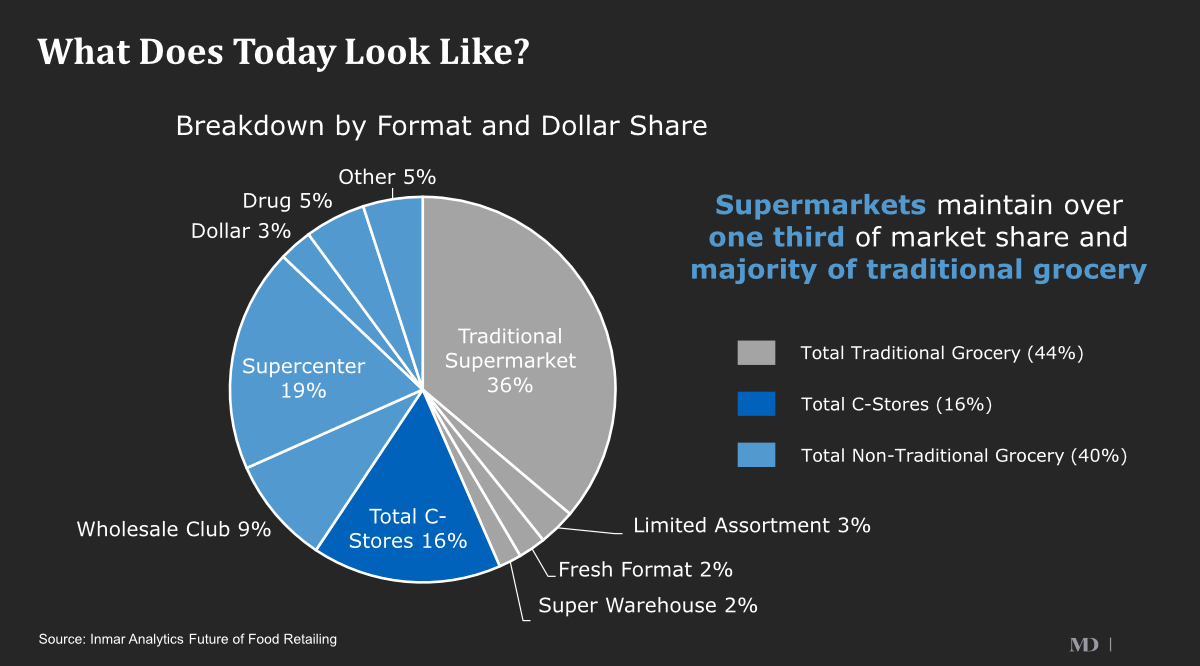 Future changes may include smaller store formats focused on specific food and beverage sectors, such as grab-and-go and products for single households, as well as plant-based or organic only. Provide the convenience of mobile ordering of a coffee so it’s ready to carry down the aisle during the consumer’s shopping trip.

That is the third disruptor — a craving for an extreme experience. That’s something the customer cannot get online.

Include elements that invite customers to stay longer in the store. Create product wows around a specific category, he said.

In-store dining throughout the various departments allows shoppers to sample what they may purchase. In-store food preparation shows how food is made. Think fresh mozzarella produced in the cheese department. Produce gets cleaned and chopped by a vegetable butcher. Have a self-serve dry-aged beef case, where the meat is tagged by age and primal cut.