We use cookies to provide you with a better experience. By continuing to browse the site you are agreeing to our use of cookies in accordance with our Cookie Policy.
Home » Meat industry in turmoil as prices soar

WASHINGTON — The situation with red meat and poultry is rapidly evolving, not unlike most other food and non-food sectors grappling with the unknown amid the coronavirus (COVID-19) pandemic. While a bit late to the food “panic” race, fears of meat shortages are no less real than those of flour, sugar, pasta and other staples seen earlier in the shelter-at-home period, most of which appear to be stabilizing.

The meat situation developed under different circumstances than did those of other items, where the shortages mostly were at retail as consumers stocked pantry shelves beyond normal levels and manufacturing and distribution needed time to catch up or redirect shipments from lost foodservice business. There never was a real shortage of food, but the meat situation is different with a bottleneck at the processing level.

“There was a ‘double whammy’ of demand and supply with meat,” Lee Schulz, PhD, associate professor, department of economics at Iowa State University, told Food Business News. “First, consumers were buying meat ahead for sheltering at home, and now there is the processing impact.”

Several beef, pork, chicken and some seafood processing plants temporarily closed or slowed output because numerous employees tested positive for COVID-19, including some deaths, with the spread of the virus at least in part thought to be linked to the shoulder-to-shoulder processing lines at the plants. So there is a real shortage of meat at retail with reduced amounts coming through the pipeline, even as livestock and poultry supplies were growing at the farm level. It is more than just a matter of logistics, as with most of the other temporary shortages.

As with other items, including eggs and toilet paper, some grocery and big box chains last week began limiting the amount of meat customers could buy, including Costco Wholesale Corp. temporarily limiting customers to a total of three packages of fresh beef, pork and poultry and the Kroger Co. limiting purchases of ground beef and fresh pork at some of its stores. Retailers who didn’t set limits often noted certain meat and poultry items were selling out. Some fast-food chains were reporting beef shortages as well, including The Wendy’s Co., with 20% of its restaurants said to be out of beef.

“Meat supplies for retail grocery stores could shrink by nearly 30% this Memorial Day, leading to retail pork and beef price inflation as high as 20% relative to prices last year,” CoBank said in a May 4 report. 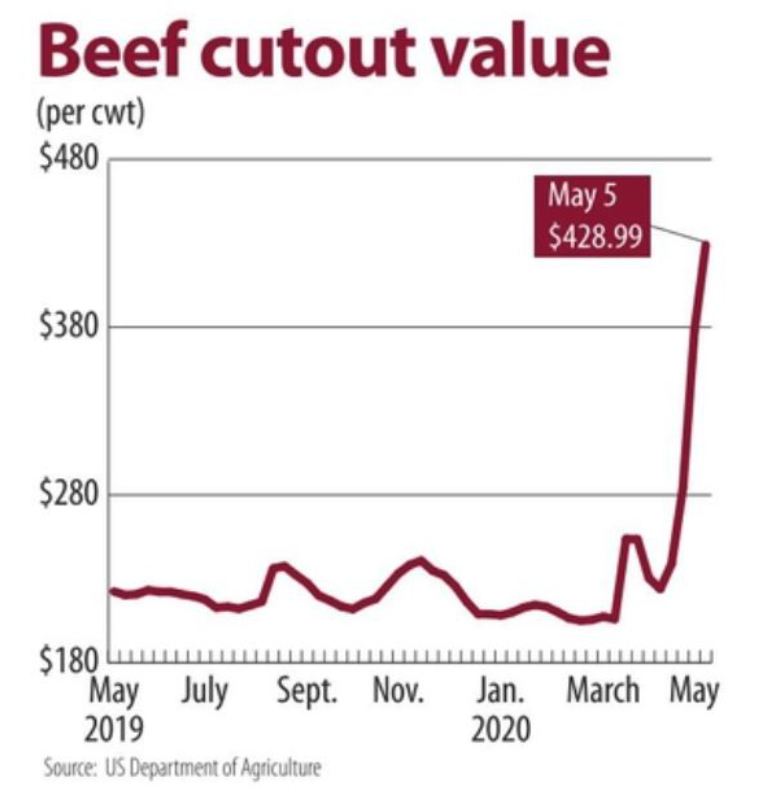 Memorial Day typically is considered the beginning of the summer grilling season, which is a strong demand period for meat and poultry.

“As communities reopen, shortages and stock-outs in the (retail) meat case couldn’t come at a worse time,” CoBank said.

More than 20 plants have temporarily closed, with the number changing regularly as some reopen and others shut down, making estimating lost slaughter and processing capacity a moving target. The closings included some plants of the largest meat processors: Smithfield Foods Inc., Cargill, JBS USA, Tyson Foods Inc. and others.

“Before the spread of COVID-19, we were expecting a record year for beef and pork production, so that’s a pretty drastic drop,” Mr. Nepveux said.

Also of note was that the US March 1 hog inventory was record high for the date at 77,629,000 head, up 4% from a year earlier, according to the USDA’s quarterly Hogs and Pigs report.

Prices have responded. Meat prices surged while livestock prices, as reflected by CME Group live cattle and lean hog futures, plunged in April, although futures prices already have begun to correct in part in anticipation of plant reopenings. USDA cutout values, which reflect wholesale prices, soared. The beef cutout was a record high $428.99 a cwt on May 5, up 17% from the end of April and up 106% since the first of the year. The pork cutout on May 5 was $113.58 a cwt, up 13% from April 30, up 55% from Jan. 1 and the highest since October 2014. Because of how meat is traded, much of the meat now on store shelves may have been priced lower several weeks ago, so sharply higher wholesale prices likely have not reached retail but may be evident in May and June.

Questions about how severe the meat situation may become and how long it will last, like so many other COVID-19 issues, may not be easily answered. But there are some clues. And, today’s shortage could turn into tomorrow’s surplus, so to speak.

“This has shaken the livestock market tremendously,” Mr. Schulz said on a recent farmdoc webinar with Todd Hubbs, PhD, agricultural economist at the University of Illinois.

“We have sufficient livestock,” Mr. Schulz said. “The challenge is converting that livestock to consumable product.”

With national hog slaughter capacity at about 500,000 head per day, a 40% reduction equates to 200,000 hogs not going to market each day, or 1 million in a week’s time, Mr. Schulz said, with that number building as plant closings continue. For cattle, a loss of 40% in slaughter capacity equates to about 50,000 head per day, or 250,000 head per week. Hog growth can be slowed, and buildings can be crowded more, but only for the very short term, he said. The situation for cattle is more flexible in part because few are raised in confinement as are most hogs, and the number of hogs is increasing much more rapidly.

Mr. Schulz said that for each 1% reduction in hog slaughter capacity, there is a corresponding 1.82% reduction in hog prices, thus a 40% cut in capacity equates to a 73% drop in hog prices, although the lost capacity mostly has been below 40%. Complicating the price paid to farmers is that only a small percentage of hogs are sold on a negotiated basis, with most sold on a formula basis or some other way, which may not be affected as much by the slaughter capacity reduction. About 20% of cattle are sold on a negotiated basis.

Feeder pig (weaned pigs sold to be fed to market weight) prices in some cases have approached zero, Mr. Schulz said. There have been reports of farmers aborting pigs to reduce numbers knowing they will have no market for them. It takes about six months for a hog to reach a slaughter weight of 280 lbs, so hogs born in April would come to market in the fall.

“While we expect pork processing to pick up in the coming weeks, US hog producers may still be forced to euthanize as many as 7 million pigs in the second quarter alone,” CoBank said. “While livestock prices have been collapsing, industry associations predict 2020 losses at $13.6 billion for US cattle producers and near $5 billion for US hog producers.”

There also is seasonality to the hog market, with slaughter typically lightest, and thus prices the highest, in the summer months. Mr. Schulz said that may offer some relief to hog producers, but with hogs backing up because of reduced slaughter capacity, much of the benefit from seasonality will be lost this year.

CME Group lean hog futures in late April were down 37% since the first of the year and were down 54% at one point in early April, Mr. Hubbs said. Live cattle futures were down about 29%.

Cattle futures have stabilized, and hog futures have since rebounded in early May, which Mr. Schulz said indicates the market is pricing in strong demand going forward.

Meat continues to be available at retail, but possibly not in the forms consumers are accustomed to finding, Mr. Schulz said. With the loss of much of the foodservice business, some meat has been redirected to retail.

Mr. Schulz stressed the importance of maintaining export markets for meat during the pandemic, even if there are shortages domestically at retail. He said in February about 50% of the value of hogs was the result of the export market.

“We want to make sure we maintain that,” he said.

President Donald Trump on April 28 issued an executive order under the Defense Production Act to compel meat plants to remain open or to resume operations to protect the nation’s food supply. (See Washington Update on Page 22.) Some already had come back online, while several remain closed even after the order. Tyson said it would have mobile units on site as plants reopened to provide COVID-19 testing and other services.

Beef and pork production still are forecast to be record high in 2020, Mr. Schulz said, but the supply is being pushed forward a few weeks or months. He believes the peak reduction in slaughter has occurred and numbers will improve as plants come back online, although capacity may remain at lower levels going forward.

While the situation in the meat industry is different from that of other food staples, although all resulted in some form of shortage and high prices at retail for a time, it adds an exclamation point to some of the deficiencies in the US food system and likely will lead to lasting changes in meat production and processing, which may impact prices at all levels.