We use cookies to provide you with a better experience. By continuing to browse the site you are agreeing to our use of cookies in accordance with our Cookie Policy.
Skip To Content
Home » People favor new food technology, but they have questions, too

People favor new food technology, but they have questions, too

BELLEVUE, WASH. — Americans have a long history of accepting technological food innovations, said Shelley Balanko, PhD, senior vice president of The Hartman Group, in a June 24 webinar. She gave the pasteurization of milk as an example.

Twenty years into the current century, consumers still are willing to accept new food technology, but they want many questions answered first.

“As consumers are confronted or presented with new food tech innovations, they are going to weigh a range of factors to determine what is acceptable,” Dr. Balanko said. “Essentially, they are going to be trying to answer the question, ‘Do the ends justify the means?’”

People will want to know the risks and benefits of new technology as well as why a company developed the technology: Was it for the greater good or mostly for company profit?

“People will be expecting new innovations to be very clear about how it was made, why it was made that way and the resulting pros and cons,” Dr. Balanko said.

The Hartman Group, Bellevue, found a majority of people want both natural food choices and scientific solutions. In a survey, 66% of respondents said they want their food to be as natural as possible while 58% said they believe scientific and technological innovations can make food more sustainable. 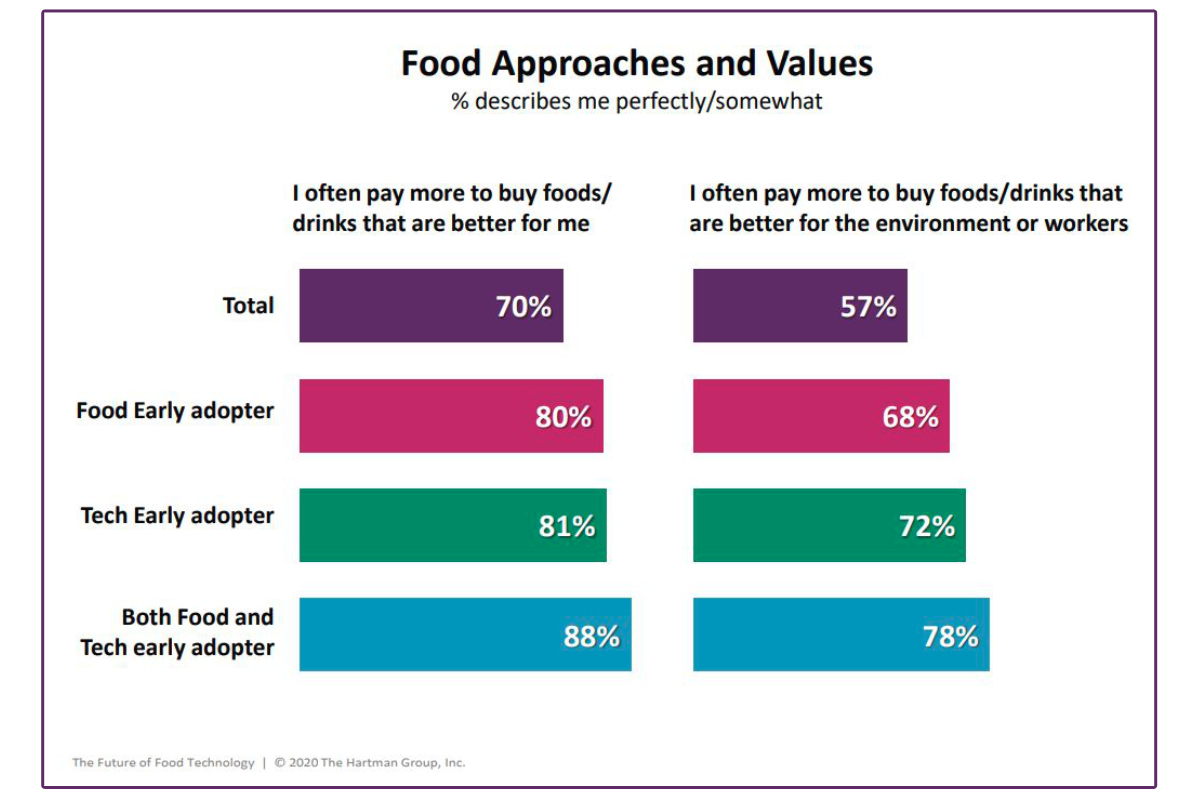 “When innovations come from the field or the kitchen, they do not require as much explanation,” she said, adding more research and consumer education will be needed to justify the higher prices for products associated with regenerative agriculture.

“People will be expecting new innovations to be very clear about how it was made, why it was made that way and the resulting pros and cons.” — Shelley Balanko, PhD, The Hartman Group

GMOs, CRISPR technology and cellular meat all face some consumer skepticism. Thirty-five percent of consumers reported buying more non-GMO products than they did a year ago, according to The Hartman Group. Concern over glyphosate is hurting GMO perceptions as well, Dr. Balanko said.

“These companies have a long-standing history of expertise and excellence in food science and technology, creating very safe, tasty products and convenient products,” Dr. Balanko said. “Safety is going to be increasingly important as we come out of the COVID-19 pandemic. This heritage of expertise and excellence will be very useful as consumers have to reimagine their standards around processed foods.”

The world still needs technological innovation in food, she said.

“Humanity’s ability to innovate with science and technology will continue to improve our quality of life, and humanity has an obligation to use its science and tech powers to make things better,” Dr. Balanko said.