We use cookies to provide you with a better experience. By continuing to browse the site you are agreeing to our use of cookies in accordance with our Cookie Policy.
Home » Digging deeper into global flavors

KANSAS CITY — Americans are seeking the spiciness of Mexico, digging deeper into Japanese flavors and experiencing the complex flair of Moroccan cuisine. A search for ethnic flavors also has people finding food colors that are “Instagram-able.” In some cases consumers are mixing and matching the ethnic flavors of the world.

Hybrid flavors are in style.

“Everything from Japanese milk bread to guava donuts are popping up in grocery markets,” Ms. Hickey said. “Many of these sweets are being promoted as limited-time offers (LTOs) to encourage consumers to try new flavors.”

Bakeries have an opportunity to introduce new flavors blended with traditional favorites. Flavors like coconut and chai may be added to create products like toasted coconut donuts and chai-spiced donut holes, she said.

“Dedicating time to making treats such as cake sushi, churro whoopie pies or even wasabi cupcakes are proving to be effective ways of bringing new taste experiences to customers,” Ms. Hickey said. 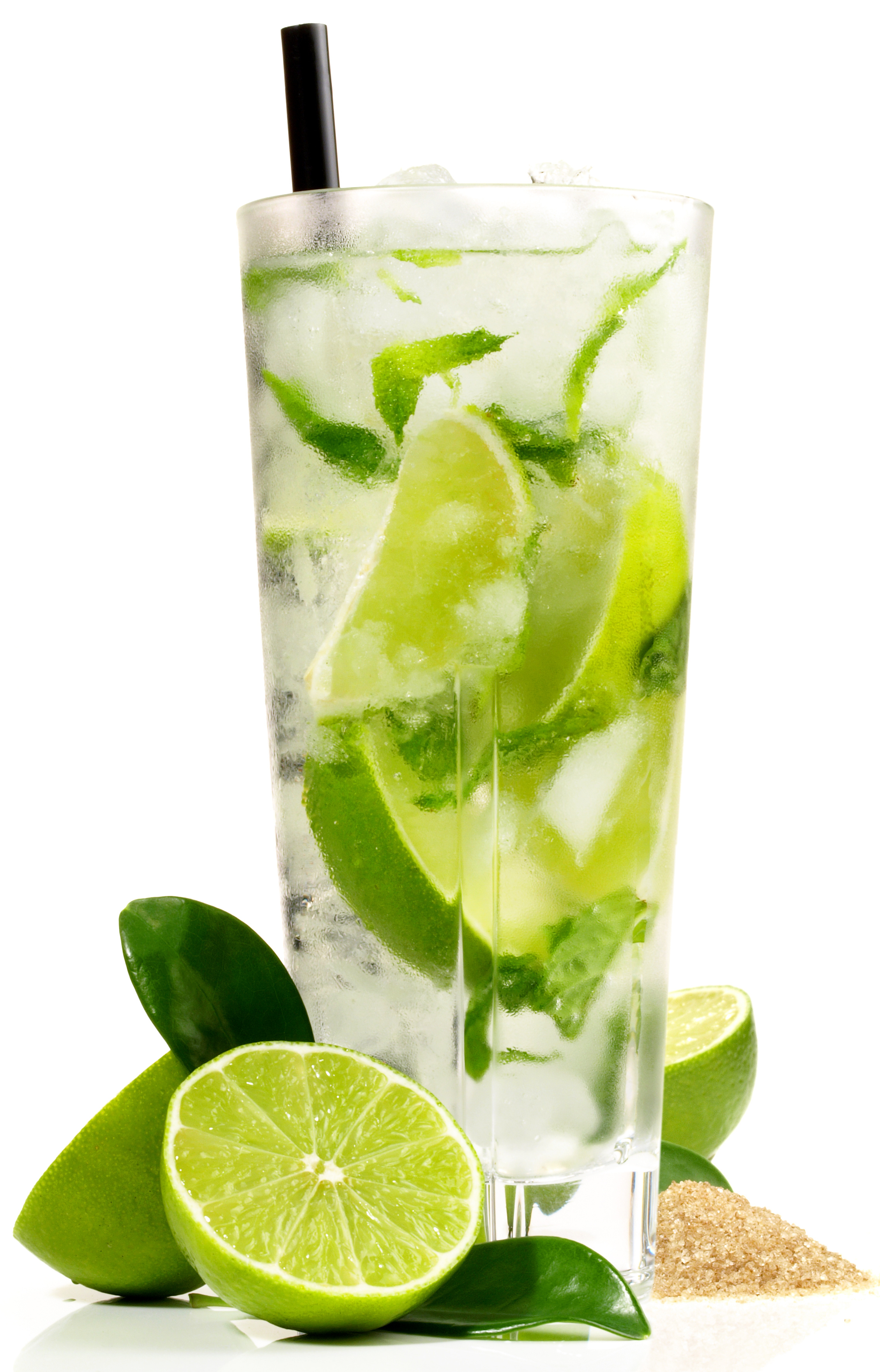 Mexican hot chocolate cupcakes contain traditional ingredients while adding ingredients like cinnamon and chili powder. A mojito bismarck donut could combine the flavors of lime, mint and rum in a familiar way.

“Mexican food speaks clearly to the hot and spicy trend that we have been seeing for years and continues to evolve,” said Anna Cheely, chef and senior scientist for Kalsec, Inc., Kalamazoo, Mich. “Foodies know the peppers that are typically used in Mexican and Latin American cuisine, but now they want to experience a different type of heat or understand the characteristics and flavors associated with a specific pepper, such as guajillo, ancho and chile de arbol.”

“Limes, lemons and oranges are often used in dishes and drinks, and they provide the fresh, bright notes that consumers are searching for,” Ms. Cheely said. “Paired with the heat already present in Mexican dishes, citrus can add that extra twist that consumers crave.”

Heat comes on the other side of the border from a specific domestic source.

The Hatch chile, a fresh roasted chile, is known for its earthy flavor, she said. It is popular in soups, stews and sauces.

The Middle East and Asia are two other sources for emerging ethnic flavors.

Ube, a purple yam with a smooth texture and a sweet mild flavor, is “Instagram-able” because of its purple color, said Cathy Armstrong, brand ambassador for Comax Flavors, Melville, NY. Comax Flavors paired it with vanilla to create a natural ube vanilla flavor.

“Other flavors we created from Asian influences included milk tea and Japanese pancake,” she said. “These particular flavors will work in a variety of applications, including baked goods, beverages (alcoholic and non-alcoholic), beverage syrups, and ice cream. In addition to be Instagram-worthy, their flavors are mild and sweet.”

People are becoming more adventurous when it comes to Japanese flavors. 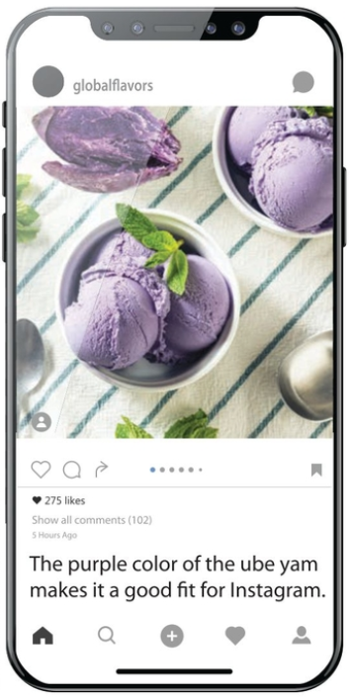 “Consumers are familiar with ingredients and flavors like matcha or soy sauce, but they’re digging deeper into flavors unique to Japan,” said Roger Lane, marketing manager at Sensient Flavors, a business of Sensient Technologies Corp., and based in Hoffman Estates, Ill.

He listed togarashi, a spice blend featuring items such as peppers, citrus, seaweed and sesame, and bonito (dried, fermented and smoked tuna flakes).

Morocco is making its move in global ethnic flavors.

“Inspirational cuisines from North Africa and Morocco with an array of bold ingredients and flavors provide a complex flair to menu items for younger consumers who are looking outside the typical ethnic realm of Chinese, Japanese or Italian,” said Doug Resh, director, commercial marketing for T. Hasegawa, which has a US office in Cerritos, Calif.

Moroccan flavors such as harissa, chermoula, kefta and ras el hanout stand out. Dishes like b’stilla, pastilla and jben show growth potential in the United States.

“A few common spices in ras el hanout include cardamom, nutmeg, cumin, anise, cinnamon, ginger, chili pepper and turmeric, although there are many, many more that can be incorporated,” Mr. Resh said.

A Moroccan savory pastry (pastilla) may be filled with chicken confit, spiced almonds and caramelized onions. Shakshuka, which is popular in Morocco, combines eggs, tomatoes, spices and herbs, although different variations also may include North African/Moroccan meats such as merguez sausage.

“The star potential of cardamom is finally making headway in menu items such as baked goods, coffee, cocktails, savory dishes and desserts,” he said. “Cardamom is aromatic, earthy and citrusy, which adds depth to the dish or beverages. Vietnamese pho, Chinese five-spice and Indian garam masala are among the most well-known dishes with cardamoms ability to bring balance to both heat and sweet.”

McCormick For Chefs, a division of McCormick & Co., Hunt Valley, Md., has launched five culinary blends to help foodservice operators incorporate trending flavors from around the world. They are pre-blended to ensure consistent flavor and reduce labor costs.

Harissa seasoning, a blend of hot chiles, warm spices and mint, is popular in African and Middle Eastern cooking. McCormick & Co. cites Datassential data from 2019 showing harissa growing 70% in total over the next four years. Harissa may be added to meat and vegetables before grilling, stirred into cooked rice and grains, or mixed into yogurt, ketchup or mayonnaise for dips.

Japanese seven spice, also known as shichimi togarashi, is a combination of seven spices, including chiles, sesame seeds and nori. It may be used with bone broth, traditional miso and ramen soups, grilled meats, seafood and stir-fry. Datassential forecasts a Japanese seven spice growing 74% in total over the next four years. 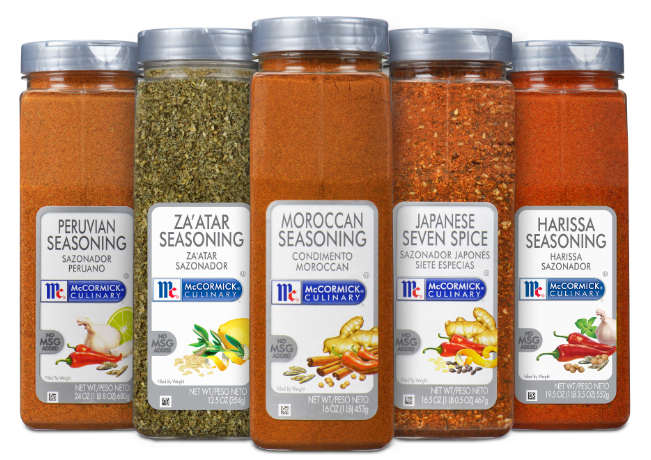 Moroccan seasoning, sometimes referred to as ras el hanout, is a mix of cinnamon, cumin, black and red peppers, and turmeric. It may be combined with vegetables, season-grilled chicken or shrimp, or it may be added to chicken and lamb stews, kabobs and couscous. Datassential forecasts Moroccan seasoning growing 180% over four years.

Peruvian seasoning is a blend of chile pepper, paprika and cumin. It brings savory South American heat to recipes and may be paired with lamb, chicken, plantains and roasted vegetables. It also may be used to create a signature house-made dipping sauce. Datassential sees Peruvian seasoning growing 68% over the next four years.

Za’atar seasoning, a combination of “herby” and “citrusy” flavors, often is used in Middle Eastern cuisine. It may be used on beef, chicken, lamb and roasted vegetables, and it may be sprinkled on appetizers like hummus or flatbread. Datassential forecasts za’tar growing 342% over the next four years.

“Our McCormick Flavor Forecast allows us to keep a pulse on up-and-coming flavor trends so we can empower operators to stay ahead of the curve and capitalize on evolving consumer preferences,” said Gary Patterson, executive research chef and senior director of culinary at McCormick For Chefs. “With these new blends, we selected flavors approaching more familiarity to help operators tap into global flavors that will be successful. Chefs wanting to explore new ethnic foods can use these blends to experiment and develop new menu items grounded in authentic flavor profiles.”