We use cookies to provide you with a better experience. By continuing to browse the site you are agreeing to our use of cookies in accordance with our Cookie Policy.
Home » Declining fear of fat fuels growth for brands

LONDON — Younger consumers are losing their fear of fat, according to a report from New Nutrition Business.

Younger consumers’ growing embrace of fat is fueled in part by the emergence of carbs and sugars as the new dietary demons, the study found. Just 16% of Americans said fat is the nutrient most likely to cause weight gain, compared to 48% who blame carbs and sugars.

The numbers are a reversal from a decade ago, when 70% of Americans were trying to reduce their fat consumption.

“When people discover fat, there’s such a taste difference,” said Julian Mellentin, director of New Nutrition Business. “Fat is the product developers’ friend, improving texture, mouthfeel, structure and moisture content. In all categories, as time passes there will be less reason to produce products that have low levels of fat. The challenge for companies is to ensure they use good quality fats where they can point to a good, natural source.”

The declining fear of fat is beginning to reshape categories, with challenger brands and big brands benefiting from consumers’ changing views, he added. 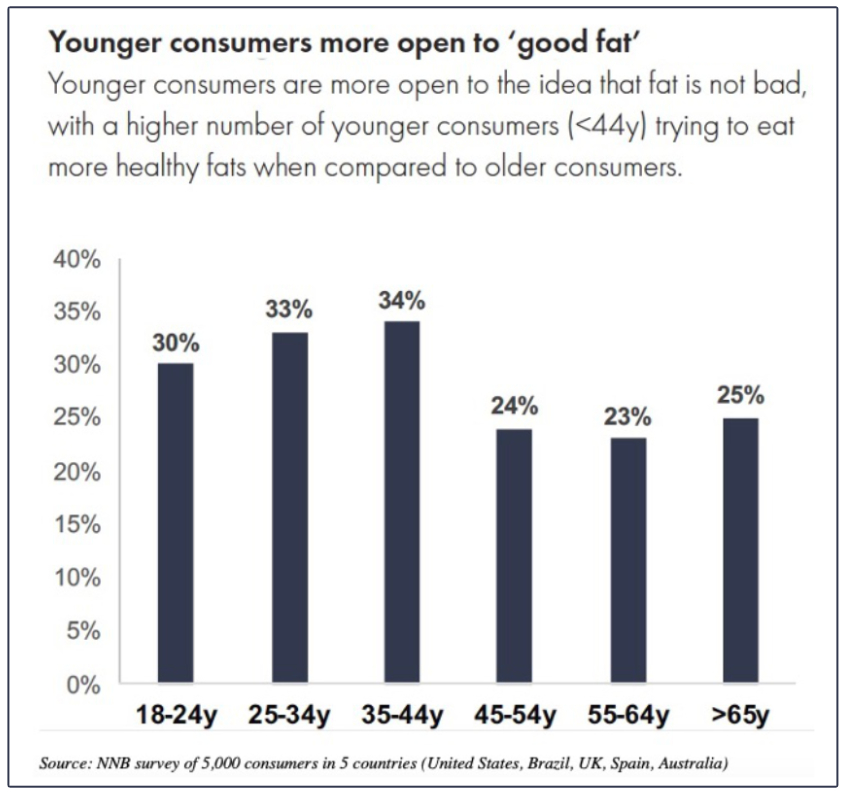 General Mills, Inc.’s Yoplait brand is introducing crème fraiche to Americans with its Oui Layered Desserts, which feature a crème fraiche base and a crispy graham cracker crust. The high-fat dairy treat traditionally is used in French desserts and cooking and typically is 30% to 45% milk fat.

Sales of butter have been growing for several years, driven by taste and all-natural claims, Mr. Mellentin said. The category saw a lift in sales during the coronavirus (COVID-19) pandemic, with the increase in dollars spent on butter outpacing the increase in dollars spent on margarines and spreads by 360%. The biggest winner was Kerrygold, a brand owned by Irish dairy processor Ornua, which saw sales increase 28 % to $235.4 million, making it the No. 2 butter brand in the United States.

The re-birth of fat is a long, steady trend that is interlinked with other trends, including fewer carbs, more protein, weight management and consumers’ growing willingness to do their own online research and challenge conventional wisdom, Mr. Mellentin said. The change also is driven by consumers who now believe they can enjoy the taste and texture of full-fat products without guilt.

“Official dietary guidelines in almost every country still call on consumers to limit their intake of saturated fats,” Mr. Mellentin said. “But a steadily increasing number of consumers — driven by what they discover during their own online research and the loss of credibility of nutrition experts over the last 15 years — are making their own minds up and embracing the idea that fat can be good, particularly in relation to weight management, one of the biggest consumer motivations.”