We use cookies to provide you with a better experience. By continuing to browse the site you are agreeing to our use of cookies in accordance with our Cookie Policy.
Home » US ‘domino’ could accelerate global cannabis market

LONDON — Euromonitor International forecasts the global legal cannabis market to reach $95 billion by 2025, which would be more than triple the market of $28 billion in 2020. Legalization in various parts of the world could have the market moving even higher.

Spiros Malandrakis, head of alcoholic drinks for London-based Euromonitor, said he could see a “domino effect” happening. If federal legislation goes through in the United States in the next couple of years, other nations could follow.

“The federal floodgates opening in the US in the next one or two years can unleash all this pent-up potential,” he said in a Nov. 17 webinar.

Economic issues could accelerate legislation as well. Mr. Malandrakis pointed out the 21st Amendment, which repealed the prohibition of alcohol, was ratified in 1933 during the Great Depression. Since shutdowns related to COVID-19 have caused economic hardship, states need to raise money. They could do so through sales taxes on cannabis products.

“I do believe we will gradually see much more momentum when it comes to legalization,” Mr. Malandrakis said. “The (Joe) Biden presidency probably will accelerate that further.”

A Euromonitor global survey showed 63% of respondents said they foresaw recreational cannabis being legalized in their country within 10 years, and 52% said they believed cannabis legalization would have a positive economic impact. 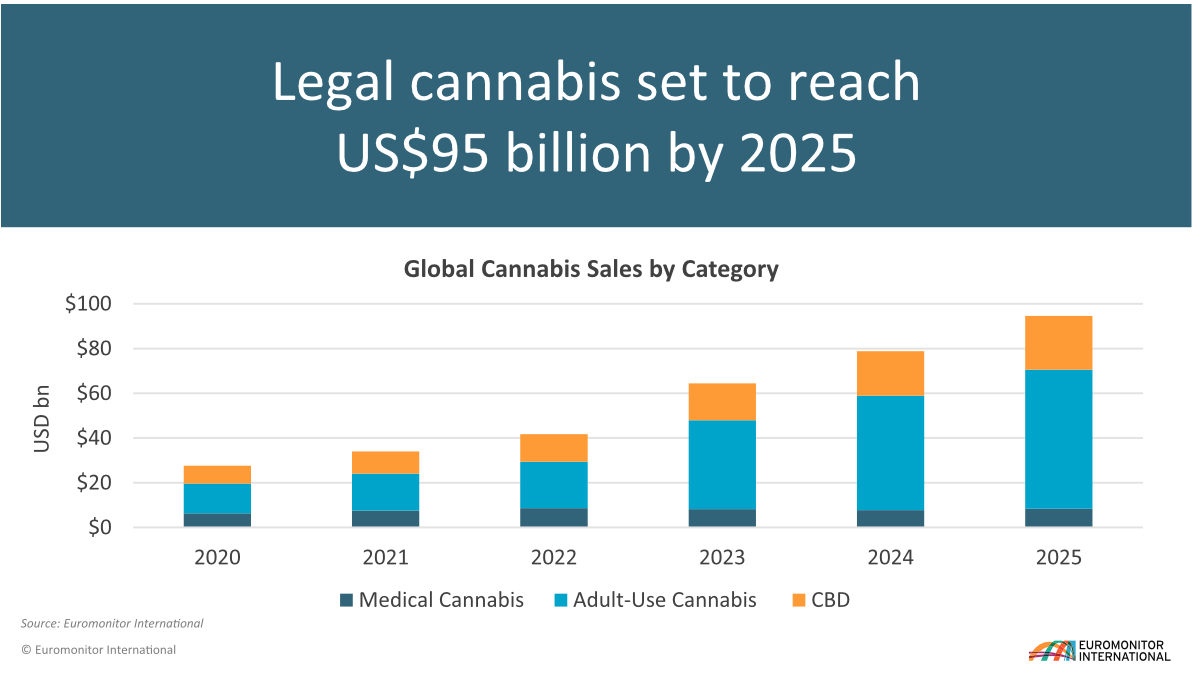 “Over time we’ll continue to see this conversation shift from outright questions about legalization to more the shape of regulation once it comes,” he said.

People consume cannabis products in various ways, not just by inhaling. In the United States, 46% of recreational cannabis consumers who live in states where it is legal use edibles as part of their consumption routine.

“In my mind, it highlights the massive potential of this industry,” Mr. Malandrakis said, adding packaged food manufacturers, including gum manufacturers, could take advantage of the opportunity.

“The potential already is there, and I think it’s only time, with the recent innovations and developments, that maybe more potential manufacturers get into that segment,” he said. “At least they should. “

"The potential already is there, and I think it’s only time, with the recent innovations and developments, that maybe more potential manufacturers get into that segment ... At least they should." — Spiros Malandrakis, Euromonitor

Companies should know which groups to target. Euromonitor divided people into five groups. The “cannacurious” made up the largest group at 50% of the population. They currently do not use cannabis but are agnostic regarding use and legislation. The “naysayers” make up 25% of the population. They do not use cannabis or support its legislation. The “seasoned consumers” at 12% are the most experienced segment when it comes to cannabis and cannabidiol (CBD). The “casual socials” at 9% consume cannabis socially and generally support legalization. The “dabblers” at 4% are a potential target for wellness CBD and edibles.

Proponents are hoping the US Food and Drug Administration eventually will make a favorable ruling for CBD. Both marijuana and hemp are Cannabis sativa L. Any cannabis plant that is more than 0.3% tetrahydrocannabinol (THC) legally is considered marijuana in the United States, according to the US Department of Agriculture. Hemp contains less than 0.3% THC and became legal to grow in the United States thanks to the 2018 farm bill, also known as the Agriculture Improvement Act of 2018.

Legal issues arise over CBD, which is found in both marijuana and hemp. Since CBD is approved for use in a drug called Epidiolex, the FDA has ruled CBD cannot be used legally in foods, beverages and dietary supplements.

It’s hard to dispute the potential of CBD.  The global CBD market, which was under $10 billion in 2020, should reach $10 billion in 2021 and then rise to $24 billion by 2025, according to Euromonitor. The United States is the top market for CBD. Products with CBD include edibles and beverages as well as flowers, vapor, capsules, topicals, pre-roll, concentrates, tinctures and sprays.