We use cookies to provide you with a better experience. By continuing to browse the site you are agreeing to our use of cookies in accordance with our Cookie Policy.
Home » Inside Jones Soda’s turnaround year

The craft soda maker, known for its unconventional flavors and user-generated artwork, in November reported a 17% year-over-year increase in total revenue for the third quarter ended Sept. 30. The turnaround marked the first step in newly appointed chief executive officer Mark Murray’s three-year growth plan, which includes a focus on improving fundamentals and expanding into foodservice and club channels.

Mr. Murray joined the company earlier this year as an adviser and was promoted to president in September before being named CEO in December. His first order of business after coming on board was interviewing distributors and talking to customers.

“I was trying to get as much information as possible to help facilitate and lead the planning process,” he said. “When you’ve been doing this a long time, you tend to come to some very quick conclusions, and the biggest conclusion I came to was that there’s some tremendous upside here. There's a tremendous amount of latent equity in this brand that we needed to jumpstart and revitalize and make relevant again.”

Mr. Murray in the spring brought on a new director of sales and implemented cost reduction and management controls.  He conducted an internal review of the company’s bottled business to sharpen its focus on core product offerings. 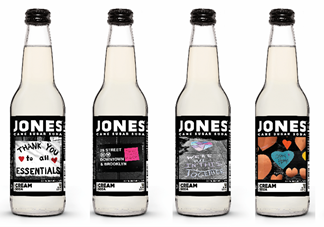 “We found we have five or six items that really are ‘must haves,’” Mr. Murray said. “Most of our growth so far has come from refocusing on those core products and making sure that we have the right products on the shelf.”

A return to the core was necessary before the pandemic, which saw many packaged food and beverage manufacturers trim skus and devote more resources to fast moving items, Mr. Murray said. But this year’s unprecedented surge in at-home consumption added a sense of urgency to the strategy.

“It drove us to say, ‘We’ve got to get focused right now, because we have to take advantage of the fact that there’s more people going up and down the shelves and more people eating at home,” he said. “We didn’t know how long that would last.”

Jones Soda isn’t pulling the brakes on its new product pipeline even as it doubles down on ‘must have’ items. Innovation in the core business will focus on new limited-edition flavors.

“Flavor innovation is all about driving awareness,” Mr. Murray said. “It’s really not as much about the impact of what a flavor does but what it does for the overall brand. If it does great, maybe it becomes a part of the core. If not, then here we come with another limited-edition flavor. Either way we’re going to continue rotating different, unique items to keep the brand fresh.”

The company also is allocating more resources toward the club channel, where it sees opportunities with multi-packs and fan favorite variety packs. New opportunities in foodservice also are on the horizon.

“COVID has offered up an opportunity for packaged goods in foodservice, like bottles you grab and take with you as opposed to a post-fix,” Mr. Murray said. “We also have opportunities to use our products as an ingredient for a finished good to be sold at customer locations. They might be in a slushie or slurpee, for example.”

Like flavor innovation in the bottled business, those co-innovation efforts are aimed at increasing brand visibility. To that end, Jones Soda also is revamping its marketing approach to drive awareness online.

The company earlier this year partnered with professional skateboarder Tony Hawk, who embarked on a 10-day tour in a Jones branded RV, which he documented and shared with his 15 million social media followers. The initiative drove an incremental 42,000 views to Jones’ website. It also launched two issue-oriented marketing campaigns. This summer’s Messages of Hope series featured bottles showcasing user-generated imagery ranging from chalk art and lit-up landmarks to murals. 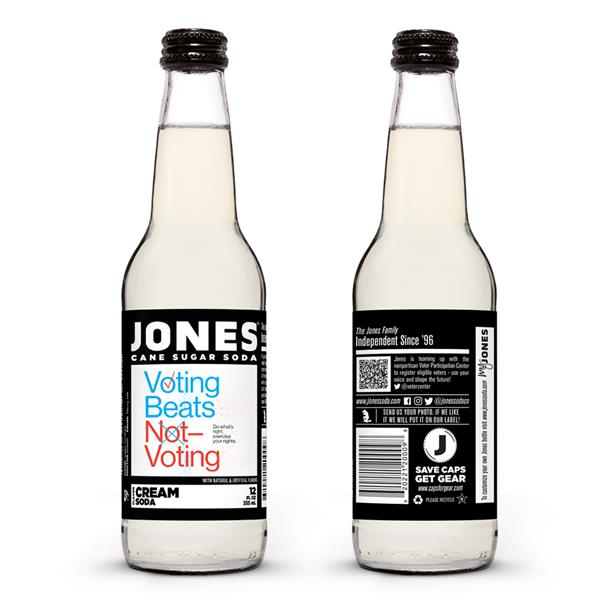 “We used art people were making to share messages of hope and coming together during COVID,” Mr. Murray said. “People really reacted to that, so we decided to follow it up with the election.”

“We really had to think about how we were going to play the vote,” Mr. Murray said. “We’re trying to be more active on the diversity side of things and we were figuring out how to support Black Lives Matter and all of these other issues. We decided encouraging people to have a choice and use their voice was a great idea. The response was like a lightning rod.”

The campaign earned Jones more than 37 million impressions, he added. A third issue-oriented campaign, set to launch in the first quarter of 2021, will highlight everyday heroes like postal service workers and grocery store employees who provided essential services during the pandemic.

With a sharpened approach to its bottled business, investments in digital marketing and several innovation streams around the club and foodservice channels, Mr. Murray expects Jones Soda will continue its current trajectory into 2021. He also expects the company will benefit from macro-trends that have benefited the larger craft soda category.

“As long as we keep the category fresh and the flavors exciting, I think we'll continue to have people going toward craft soda,” he said. “People are looking for things that are a little bit different and unique, and that’s what we have.”