Raising the bar in brand building

The Sheboygan Falls Town, Wis.-based entrepreneur previously established Nourish Farms, a non-profit that partners with local farmers to provide chef-prepared meals to homeless and at-risk children. But she wanted to address the need for nutritious food anywhere at any time.

Bunch Bars combine plant-based ingredients and feature flavors such as dark chocolate almond and peanut butter dark chocolate. Consumers may purchase a 10-pack of the bars online and select one of three causes to support with a donation of two bars.

“The idea for a bar came to us probably five or six years ago, but we were so busy getting Nourish Farms up and going, we put it on the backburner,” Ms. Christensen said. “We started this in anticipation of an upcoming recession, as we saw economic reports and so forth. Who could have known just how absolutely needed a product like this would be, with now 1 in 7 kids struggling with hunger?”

Drawing on years of experience in consumer packaged goods innovation, she, along with several friends, developed the recipes for the bars, formulated with organic dates, soy protein crisps, organic dark chocolate, peanuts and almonds. 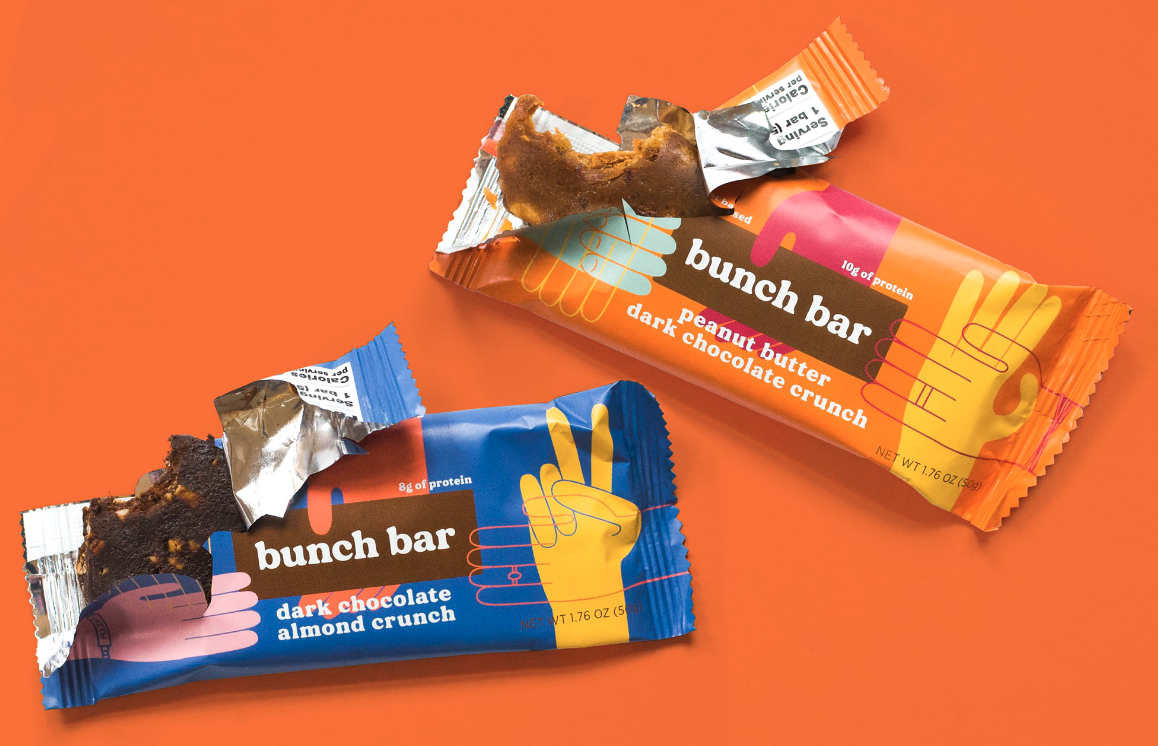 She had the vision and product, but no name, package or marketing plan. A colleague referred her to Bader Rutter, an advertising agency with offices in Milwaukee and Chicago. Building a brand that resonated meaningfully with consumers was a priority, said Ned Brown, chief creative officer at Bader Rutter.

“Part of the very first conversation we had with her was around the central core notion, which was she believes in such an amazing mission, that great food should be available to everybody, period,” Mr. Brown said.

He described an “involved and collaborative” process of research and consumer testing to create a name that would stand out in a crowded marketplace while capturing the emotional essence of the brand. The name Bunch Bar ultimately was selected to reflect “a bunch of people who came together with this idea of creating something with a bunch of good ingredients … to then reach out and help a bunch of other good people in need,” Mr. Brown explained.

Additionally, the team developed dozens of designs, experimenting with colors and fonts before landing on a look the company describes as “warm and welcoming,” emphasizing “friendliness and approachability.”

“Hopefully anybody who sees this brand gets this sort of vibrant positivity and goodness, good energy, and, out of that, the mission and vision behind the why is there,” Mr. Brown said.

After about a year in development, which included pandemic-driven delays and hurdles, Bunch Bar launched at bunchbars.com in October. Donations support Boys & Girls Clubs, Center on Halsted and Sarah’s Circle, organizations chosen by Ms. Christensen to serve her company’s mission.

“While many food brands hit the brakes because of the pandemic, we hit the gas pedal,” Ms. Christensen said. “We needed to get this brand up and out as fast as we possibly could and start that giving process, enabling people when they’re sheltered at home to help others.”

“While many food brands hit the brakes because of the pandemic, we hit the gas pedal.” — Carol Christensen, Bunch Bar

She plans to expand the brand’s presence into retail stores to support additional causes and communities. She also expects to add other packaged snack products to the portfolio.

“We’ve had a lot of corporations buy our bars, too, because of the philanthropy aspect,” she said. “Corporations are often looking to their up-and-coming millennials in how to engage and retain them. This is a millennial-driven brand start to finish.”

Bader Rutter, which has roots in agribusiness and collaborates with packaged foods companies, also developed custom code for a website for Bunch Bar and created assets for social media as well as merchandise to build brand awareness. A Bader Rutter designer set up a studio in his living room to photograph the products when commercial studios were closed due to the outbreak.

“I would not hold back in asking people for help when you’re starting,” Ms. Christensen said. “Sometimes, because it’s so difficult, it can feel isolating when you’re an entrepreneur. Where you put your guard up because this is your baby and you become protective. That’s a very natural human response.”