We use cookies to provide you with a better experience. By continuing to browse the site you are agreeing to our use of cookies in accordance with our Cookie Policy.
Home » Milling company Nippon rebrands as NIPPN

To more accurately reflect its diversification into the production of food ingredients, processed food and health care products, etc., the Tokyo-based company on Jan. 1 officially changed its name to NIPPN.

“The change of our company name takes place for the first time since our founding, and we consider it as a refreshed startup that will make us fully reborn,” NIPPN President and Chief Operating Officer Toshiya Maezuru told World Grain in a recent interview. “We are aiming to accelerate the diversification of our business — which started in flour milling and has expanded to food, ready-made meals, and health care — and the expansion of our business in growth areas by sending the symbolic message with the company name change.”

Mr. Maezuru said the company’s decision to diversify and rebrand was driven by significant demographic, sociological, and dietary changes taking place in Japan.

He pointed to an aging population, a declining birthrate, more women entering the workforce, and an increase in double-income and smaller households as well as growing demand for ready-made meals and more health-conscious consumers as factors that have influenced the company’s direction.

“Sales in our food business have increased and are now twice as much as that of our flour milling business,” Mr. Maezuru told World Grain. “We have decided to change our company name in order to clarify our determination to achieve further growth in this segment in the future.” 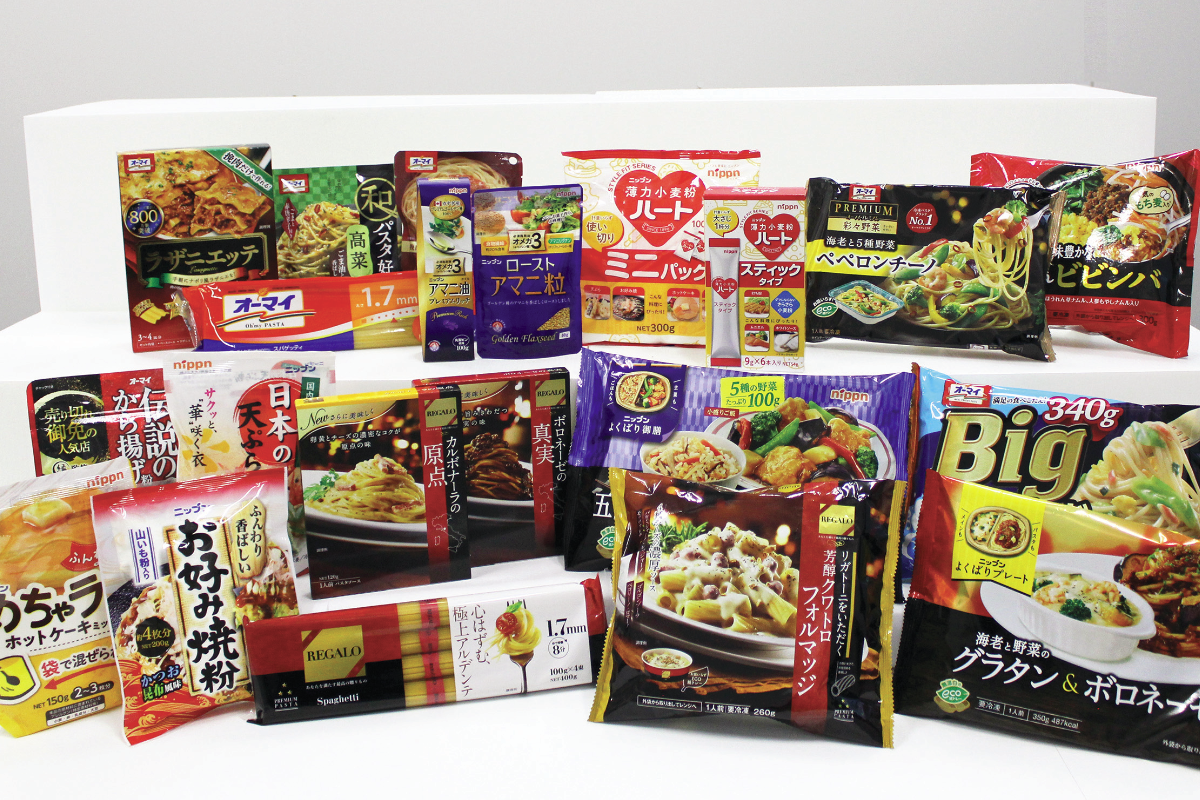 “Recently, sales of home-use frozen food have especially been expanding,” he said. “Needs for food for a single person and convenience led to the increase in demand for it. Our home-use frozen food not only seeks deliciousness but also expands its product lineup to meet various needs. We are selling many products, particularly in the frozen pasta category, and the authentic pasta series with enhanced premium features and quality and big-size pasta series are growing.

“In addition, frozen meals packed in a tray, which allow us to enjoy staples and a main dish at the same time, have become popular as food products other than frozen pasta. We use an environmentally friendly paper tray as a container of the product, which is receiving a favorable reception from our customers.”

Although Mr. Maezuru said the former company name that expressed the specific business of flour milling “no longer fully describes the company or the group,” flour milling will remain a significant part of the NIPPN portfolio. Although the food segment has higher sales, it was the flour milling segment that in the 2019 fiscal year accounted for 51% of the company’s operating income, compared to 44% for food.

He noted that one of the reasons NIPPN’s food segment has been flat in terms of operating profit was the company continues to make large capital investments to address future growth in that area.

He noted that per capita annual wheat flour consumption has been flat in Japan at around 33 kilograms, while rice, for many decades a staple in the Japanese diet, has been trending downward in recent years. Mr. Maezuru noted that the rate of cooking rice at home is undergoing a particularly steep decline, although demand for rice flour has been increasing.

Most milling wheat is imported from the United States, Canada or Australia, but Mr. Maezuru said, “demand for made-in-Japan products is increasing and the need for Japanese wheat is growing as more products made from domestic wheat are being launched.”

In October 2020, NIPPN, which has been in the premix business since 1959, completed construction of a new premix plant at its Fukuoka mill. It already has premix plants at its Ryugasaki plant in eastern Japan and the Kobe-Konan mill in western Japan.

“After the completion of this new premix plant at Fukuoka Mill, there will be three plants for our premix business and it is expected that the company will increase production capacity and have a more efficient production and logistics system,” he said.

NIPPN has continued to grow its footprint outside of Japan and now has business operations in China, Thailand, Indonesia and the United States.

“Overseas business is one of the growth areas for NIPPN, which will be intensively promoted into the future,” Mr. Maezuru said. “We are currently focusing on rapidly growing markets in Asia and North America. In Asia, we conduct local promotion and sales activity mainly of premix at three business locations in China and two business locations each in Thailand and Indonesia.

“We are actively making investments in these areas to expand business activities.”

In the North American market, NIPPN California, Inc. and Pasta Montana LLC are operating as affiliate companies of NIPPN.

Pasta Montana, which was founded in 1996 and acquired by NIPPN in 2000, uses the high protein and high gluten durum grown in what is known as the “golden triangle” in the north central region of Montana. It manufactures more than 70 types of dry pasta.

“NIPPN California also supports product development of customers comprehensively by offering wheat flour for noodles and bread as well as a variety of auxiliary materials,” he said.

Among its recent expansions in its North America business was the installation of an additional production line at its pasta plant in the United States.

NIPPN’s diversification strategy has led the company to branch out beyond producing daily foods. In what is labeled its “Other” business category, NIPPN draws upon its many years of grain-based research to manufacture heath care and pet food products.

“The health care segment is a promising field as more people have become health conscious with the progression of an aging population,” Mr. Maezuru said. “We currently handle flax oil and flaxseed products such as grained flaxseed, flaxseed powder and dressing with flaxseed oil, ceramide (a skin moisturizer), maslinic acid (an exercise-support ingredient) and others.”

Ceramide has become a high-demand product. The company notes that all NIPPN’s ceramides are extracted from plants and purified by using a unique manufacturing method so that only traces of impurities that may affect the color, taste and smell remain.

“They have excellent processing stability, which enables their application in a wide variety of products,” he said.

In 2014, NIPPN developed the world’s first technology for continuous industrial production of high-purity ceramide from rice bran in collaboration with the National Agriculture and Food Research Corporation and Organo Corporation.

NIPPN said the “Other” business segment accounts for about 5% of its annual consolidated operating income.

Like every other nation, Japan has faced challenges in dealing with the COVID-19 pandemic, which has lingered for nearly a year now. The Japanese government declared a state of emergency and shelter-in-place orders for non-essential workers from April through May of last year.

The Japanese government has issued a “new lifestyle” proposal for its citizens to combat COVID-19 based on the recommendation of the Expert Meeting on the Novel Coronavirus Disease Control.

“It is being promoted, although long-term consumption trends will be changed depending on the pandemic situation in the future,” he said. “We are expecting that this will lead to further growth in demand for cooking at home and needs for delivery services, etc.”

Mr. Maezuru said NIPPN is “taking every precaution to prevent infections and protect the safety of our customers and employees while fulfilling our social responsibility to provide a stable supply of food even in this situation where the effects of COVID-19 continue to expand.”

“While demand for home-use food products rose, due to the effects of the state of emergency declaration to control infections, including stay-home recommendations, requesting temporary suspension of business operations in various industries, shortening business hours, and canceling large events, demand for professional-use products for restaurants and ready-made meals decreased,” he said.

He noted that operating results of the company may be significantly affected by changes in consumer behavior both in Japan and overseas.