CHICAGO – As the world approaches the one-year anniversary of Friday, March 13, 2020, when we were told to stay at home, do not go out, Chicago-based Farmer’s Fridge, a company that has been providing fresh food through vending machines primarily in airports and office buildings since 2013, finds its products in one of the least likely places: Dunkin’. The company has been test marketing the concept since early January in six stores, three in Chicago and three in New Jersey.

“It’s crazy interesting (to most people),” said Meghan Hurley, head of brand marketing and growth for Farmer’s Fridge. “People are like, ‘how are salads and this food accessible at Dunkin’ Donuts.’”

“This food” includes some of the same applications the company offers in its vending machines, such as salads and bowls, as well as breakfast items like yogurt parfaits and oats. The meals, which are prepared and packaged at a 50,000-square-foot production facility on Chicago’s South Side, come in recyclable plastic jars.

Speaking at a Chicagoland Food and Beverage Network virtual event hosted by the Bader Rutter Intel Distillery on Feb. 2, Ms. Hurley compared grabbing food from a vending machine while running through an airport to going through a drive-thru restaurant. That’s why the Dunkin’ partnership works well.

“When you’re looking for something that is easy to grab and go, and that also covers a meal, Farmer’s Fridge is the answer to that,” she said. “With the increase in drive-thrus and Dunkin’ trying to grab more opportunity and more mealtimes, the partnership really makes sense.

“From a brand perspective, it’s like, donuts and salads? That sounds crazy. But so far it’s been really fun and exciting.” – Meghan Hurley, Farmer’s Fridge

“From a brand perspective, it’s like, donuts and salads? That sounds crazy,” Ms. Hurley said. “But so far it’s been really fun and exciting.”

Ms. Hurley started with Farmer’s Fridge only about six months before that dreaded Friday the 13th. Her role was to promote fridges in the Northeast, which was a new market for the company. The company had only been selling in Chicago, Milwaukee and Indianapolis up until late 2019.

“We lost 70% to 80% of our business that first week,” Ms. Hurley said. “It hit the Northeast first, then Chicago. No one was traveling.”

Founder and chief executive officer Luke Saunders had always been interested in opening in other channels, but it was not in the company’s plans in 2020. That changed almost overnight.

“Because we are vertically integrated, we make all our own food and have our own delivery and logistics systems, we started delivering to homes,” Ms. Hurley said. “It was really about turning our night owls into daytime drivers, dropping off at homes instead of filling (vending) fridges.”

The company advertised on Facebook in Chicago and New York. Ms. Hurley was unsure if anyone other than its employees would order home delivery. 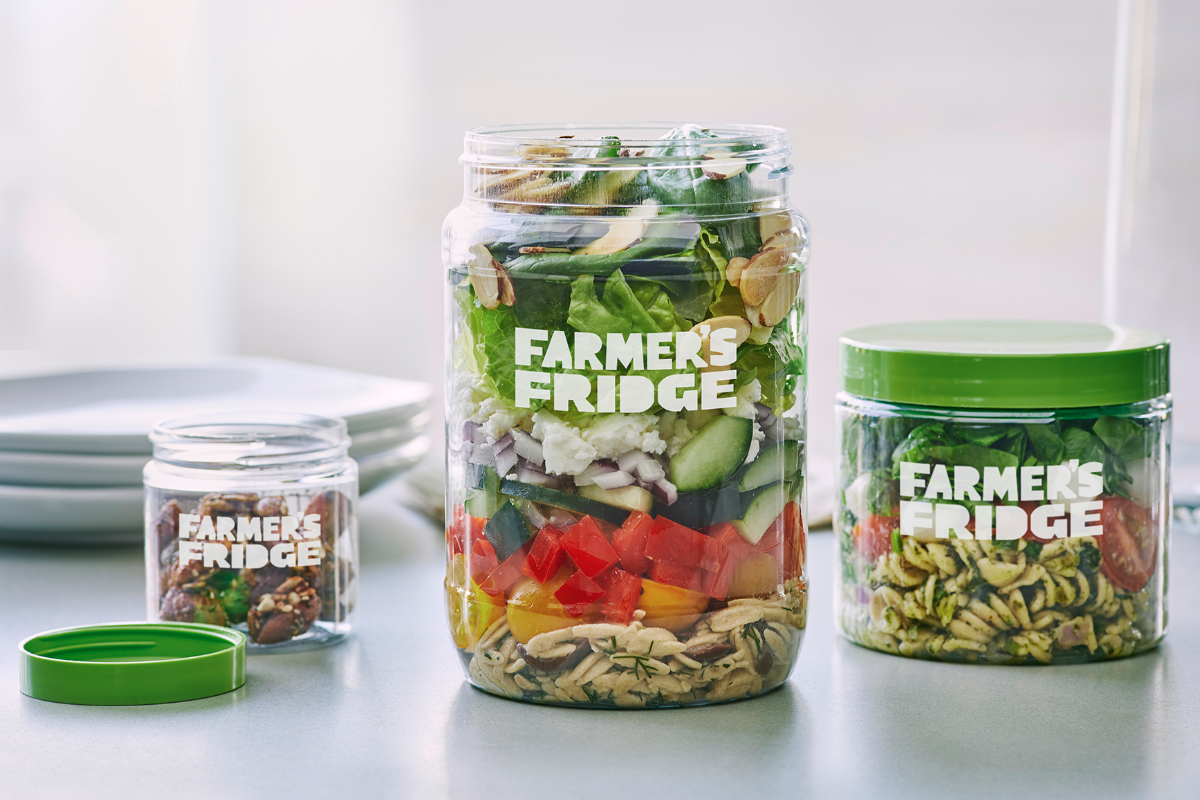 “We were missing our foods,” Ms. Hurley said. “We were wondering if we were going to get customers that were not our mothers or friends. But it really started to take off and continued to build throughout the year.”

In addition, early in the pandemic, the company found business in delivering to hospitals. It was not for vending machines but rather for feeding the staff, who often found themselves secluded to one floor without access to food. Then as universities reopened, product was in demand for cafeteria lines and snack shops. And that’s when the company decided to explore quick-service restaurants.

“We knew a guy who knew a guy, and that’s how the Dunkin’ partnership started,” Ms. Hurley said. “The Dunkin’ items are just in test right now, but we hope to partner with other restaurants in the future.”

It’s almost one year later and Farmer’s Fridge’s business is near pre-pandemic levels. Sales are going through different channels, as most fridges remain inactive.

“Before we were in fridges and now we are a fresh CPG (consumer packaged goods) company,” Ms. Hurley said. “We like the idea of spreading out our bets. The world opened up to us. But we know we must not lose sight of how important the brand is.”