We use cookies to provide you with a better experience. By continuing to browse the site you are agreeing to our use of cookies in accordance with our Cookie Policy.
Home » Three startups setting out to transform the food system

Three startups setting out to transform the food system

The companies are tackling some of the factors resulting in the warming planet while delivering nutritious solutions to the marketplace.

Renewal Mill, Oakland, Calif., transforms the pulpy leftovers of soy and oat milk production into versatile, gluten-free flours that boost the fiber and protein content in a variety of consumer packaged goods applications.

“We want to make the right thing the easy thing,” said Paul Shapiro, founder and chief executive officer of The Better Meat Co. “We have to make sure that doing what’s better for the planet doesn’t come with sacrifice.”

The story of Perfect Day begins with a bad bagel. Ryan Pandya, a newly vegan biological engineer with a cream cheese craving, tasted a plant-based schmear so awful, he began researching the functional properties of milk.

“Essentially there had to be some component in cow’s milk that’s missing in almond milk or soy milk,” he said. “It turns out it’s protein from milk. … The question from there was, is there a way to make the protein from milk without animals?”

As he began pondering the question, he met Perumal Gandhi, a fellow scientist and struggling vegan with similar aspirations for developing animal-free dairy. The pair co-founded Perfect Day, then called Muufri, in 2014.

Perfect Day produces milk proteins by introducing the cow’s genetic code to microflora grown in large fermentation tanks. The ingredients have gained regulatory approval and provide the taste and texture of dairy minus the lactose, cholesterol, hormones or antibiotics.

Crafting dairy proteins without cows requires less energy consumption, land usage, greenhouse gas emissions and water consumption, according to Perfect Day, which raised $300 million in venture capital funding over the past year to expand its processing technology. In recent months, the company has doubled its production capability while significantly reducing costs several years ahead of expectations.

Initially the founders considered manufacturing and marketing branded products but soon realized collaborating with food and dairy companies would create a greater positive impact on animals and the planet.

“There’s pretty much no aisle of the grocery store that you could go into and not find some kind of dairy,” Mr. Pandya said. “To us it speaks to a need to get things moving faster in terms of the proliferation of different concepts and partnerships we can put together.”

Products featuring Perfect Day protein may be labeled vegan and kosher certified but must include an allergen statement indicating milk protein. Mr. Pandya and Mr. Gandhi are committed to providing transparency and education to communicate the health and environmental benefits of the process. Mr. Pandya admitted the term “animal-free dairy” is “fundamentally new and somewhat oxymoronic.”

Production currently focuses on non-animal whey protein isolate, which may be used in applications such as frozen desserts, soft cheeses, energy bars and beverages. Next up is non-animal casein protein, which will unlock a range of functional properties, such as the stretching and melting of cheese. The founders also are exploring animal-free milk fats.

“We’ve been able to create an extremely scalable, low-cost platform for making the best protein known to the world today,” Mr. Pandya said. “And our view is because we built this platform to make essentially any protein, the sky’s the limit. We can make the major proteins in milk, but there’s no reason we need to stop there. We can make proteins in any other category. We can even design proteins down the road for optimal nutrition.”

Imagine, for example, allergen-free gluten, soy or egg protein, or textures, flavors and functions in cooking that are only possible with Perfect Day's custom food ingredients.

For now, however, dairy remains the focus. Seven years after the company’s founding, the first products formulated with Perfect Day protein are hitting grocery store shelves nationwide. In recent months, animal-free dairy ice cream has rolled out from brands including Brave Robot, Graeter’s and Nick’s.

Cookies, tortillas and baby food are among products in the marketplace featuring okara flour, an upcycled ingredient supplied by Renewal Mill. Okara is the fiber-rich pulp left over from soy milk and tofu production and was previously discarded or used as animal feed. 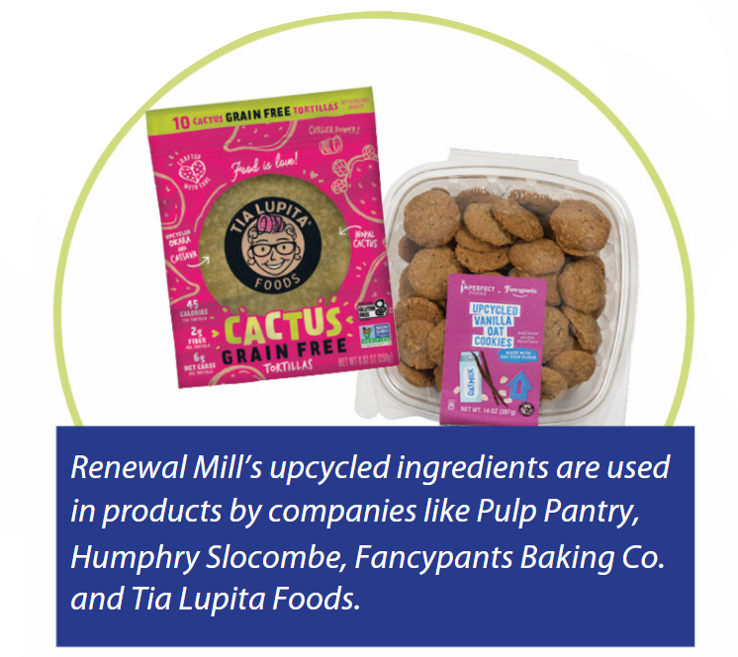 Okara flour has more fiber, protein and calcium than white flour with fewer net carbohydrates, yet the ingredient offers the same functionality, taste and price, according to Renewal Mill. It may be used in sweet and savory applications, pasta, biscuit mixes, cookies, sauces, pizza dough and extruded puff snacks.

Renewal Mill recently added its second upcycled ingredient to its portfolio, a flour based on the pulpy byproduct of oat milk processing.

“Since our founding, Renewal Mill has always wanted to be a next-generation ingredients company, so we were excited to bring on a new ingredient this year,” said Caroline Cotto, co-founder and chief operating officer. “We’ve chosen it not only because of the popularity of oat milk in this moment, but also the nutritional value of that product and the fact that the processing is very similar to okara.”

The oat milk flour is allergen-free and higher in protein than the okara flour.

“We’re seeing people make things like high-protein pancakes, any sort of traditional baked good you’re trying to boost the nutritional content of,” Ms. Cotto said. “It can also be used for thickening for sauces and any sort of vegan meat application… We know it works for extrusions, snack applications. Chips, crackers, as well as tortillas, flatbreads.”

The company’s upcycling process may be applied to numerous byproducts, including carrot pulp, vanilla bean pulp and the leftover cake from sunflower seed oil production.

“There’s a whole host of other byproducts,” Ms. Cotto said. “Like pea starch left over from pea milk and some of the larger byproduct streams like potato peels.”

“We’re working with smaller brands as well as large legacy brands,” Ms. Cotto said. “We’re doing a pilot with Barilla and some other Fortune 500 food companies.”

Renewal Mill also produces individually packaged cookies and baking mixes made with okara flour that are sold in about 160 retail outlets, including select Whole Foods Market stores, as well as online platforms such as Thrive Market, Fresh Direct and Good Eggs.

The best chicken nugget in grocery stores, according to a recent survey by the Food Network, is actually part-chicken, part-plant.

“If you contemplate that the best tasting frozen chicken nugget in America is only 50% chicken, just imagine what we could do if every chicken manufacturer in the country were utilizing these products,” said Paul Shapiro, co-founder and CEO of The Better Meat Co. “We’re using a combination of plant protein, fiber, fat and flavors that when combined in proprietary ways help to seamlessly blend directly into meat and improve on taste. That’s the real key for us. We are not subtracting from taste or texture. We’re actually enhancing it.” 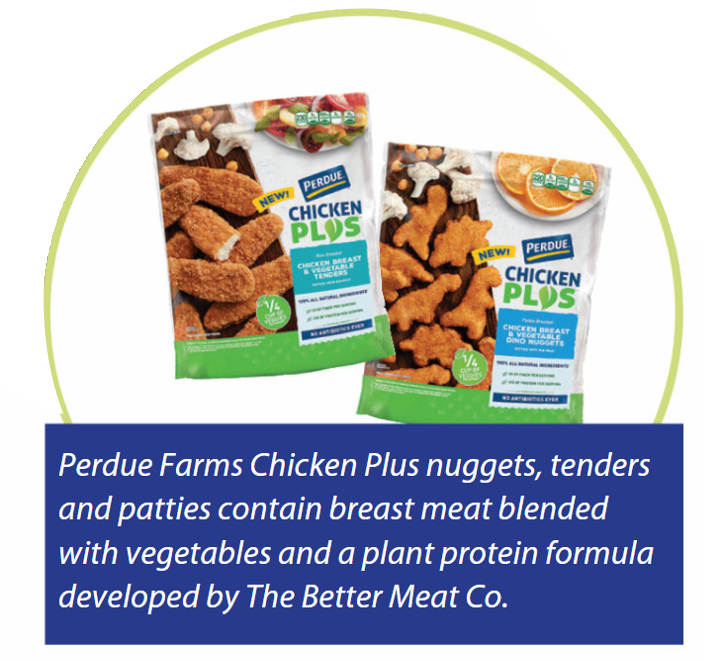 The pandemic created challenges for The Better Meat Co. as new product development stalled at most major manufacturers last year and construction on a new production facility in Sacramento encountered delays. However, the company was successful in closing an $8.1 million seed round that included participation from Johnsonville Holdings, parent company of Johnsonville Sausage.

Mr. Shapiro said he expects the meat market someday will resemble the automobile industry with its conventional, electric and hybrid options. Similarly, consumers may demand a choice of animal protein, plant protein and protein blends. Data from The Hartman Group, Bellevue, Wash., showed 56% of plant-based purchasers are interested in buying blended burgers and 21% of non-purchasers are interested in or already buy blended burgers.

“Many people have for a long time associated protein with a hunk of flesh from a once-living animal’s body,” Mr. Shapiro said. “In the future, people will think of protein as a far more diverse portfolio of sources.”