Kelp’s role in the future of food

CHICAGO – The Future of Food @ SXSW took place virtually March 18-21. It included a diverse group of speakers who challenged attendees to think about how food and agricultural production will need to evolve to feed the growing global population. One emerging option in North America — kelp.

Bri Warner, chief executive officer, Atlantic Sea Farms, Saco, Maine, explained how US farmed kelp may contribute to increasing global food production and mitigating climate change. The company has been championing the production of domestic seaweed since its founders created the first commercially viable seaweed farm in the United States in 2009. Unlike imported seaweed, Atlantic Sea Farms products are not dried or dyed.

The company’s flagship product is ready-cut frozen kelp that requires thawing before eating. The company also sells frozen pureed kelp cubes ready for use in smoothies, soups, sauces and dressings.

“The kelp is blanched before it gets frozen,” Ms. Warner said. “This turns it bright green and knocks off some of that deep ocean flavor.”

The company recently added three fermented raw kelp products to the brand. They are sold jarred and require refrigeration. The seaweed salad includes napa cabbage and daikon radish and is promoted as being high in probiotics. It won a new product award in the pickles and olives category as part of the Specialty Food Association’s 2020 sofi Awards. There’s also seaweed kimchi and seaweed beet kraut.

“We make kelp products that are ready to eat and readily accessible,” Ms. Warner said. “Our kelp is grown in the clean, cold waters of Maine by 24 fishermen via regenerative aquaculture, pulling 8,000 lbs of carbon and 250 lbs of nitrogen out of the ocean per season per farm, leaving our ocean and atmosphere better than we found it. We estimate that we will have removed about 80,000 lbs of carbon from the ocean in just three growing seasons by the end of 2021.” 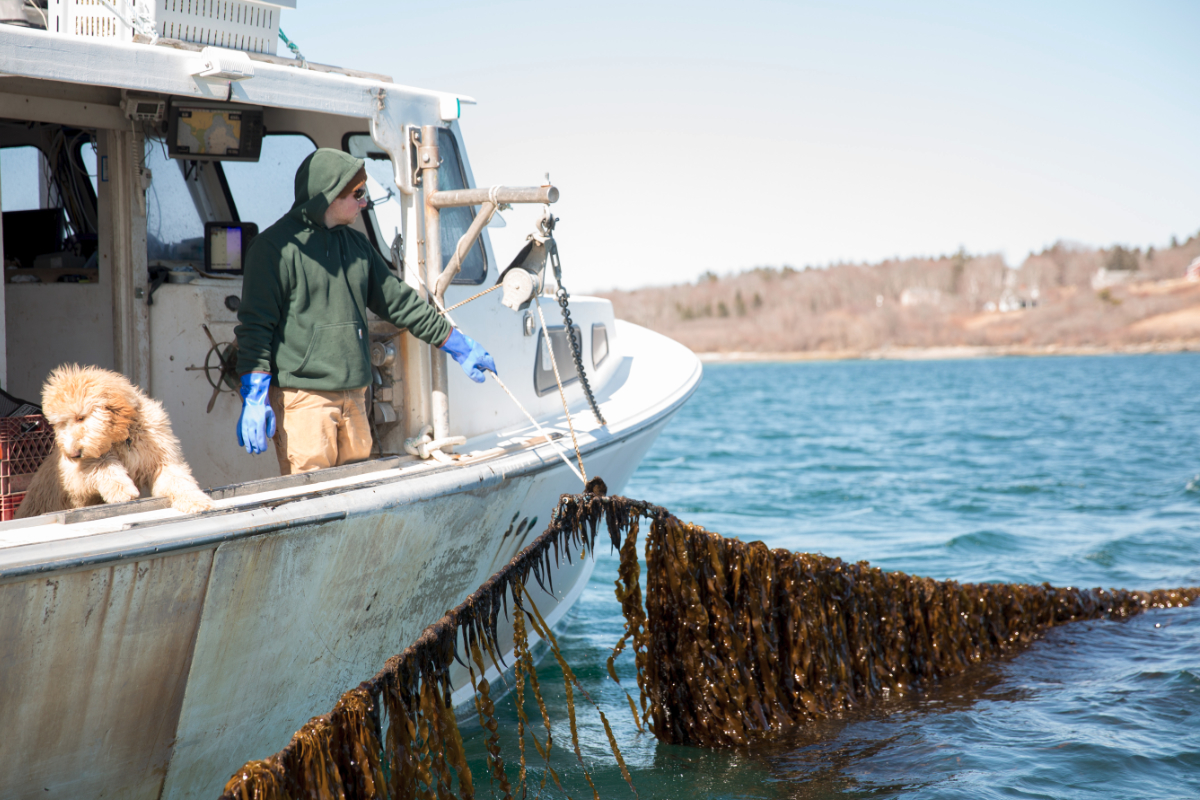 The Gulf of Maine is warming faster than 99% of oceans worldwide, she said. The surrounding communities are experiencing the effects of coastal flooding and more acidic oceans. Marine species also are migrating at an unpredictable rate. By sequestering carbon dioxide absorbed by the oceans, growing kelp helps to reverse the acidification of the waters as well as the negative effects that a lower pH has on marine life.

One of Atlantic Sea Farms’ goals from the beginning was to expand how Maine’s coastal waters are used to produce food, as it has long been almost entirely dependent on lobster. The company works with Maine fishermen to diversify their income by starting seaweed aquaculture farms.

“We need food sources that can positively impact the economic and environmental health of our coastal communities,” Ms. Warner said. “We provide technical support, harvest training and free seeds to our partner farmers, these independent lobstermen who may use the same boats and much of the same equipment to grow and harvest seaweed in the months between lobster seasons. We also agree to buy all the kelp they grow and develop markets for it.”

To do the latter, the company works with nutritionists to educate consumers about kelp. It is an excellent source of iodine, potassium, magnesium, iron and calcium. Atlantic Sea Farms also partners with chefs to develop recipes and serving suggestions, which are on its website (atlanticseafarms.com).

While kelp is an emerging ingredient in the US market, Ms. Warner is confident that as more culinary professionals explore its use as a source of umami, its popularity will grow. She said use is not limited to seafood or vegan recipes.

“It’s great with lamb and pork ramen,” she said. “It works well with most proteins.”