NEW YORK — A self-described “Columbus of cacao,” Israel native-turned-New Yorker Oded Brenner has spent the past few years discovering new applications for the oft-underutilized fruit. He previously founded and sold Max Brenner, a chocolate restaurant and retail brand with dozens of locations around the world. More recently, he opened Blue Stripes Cacao Shop, a cafe in Manhattan’s Union Square serving a variety of foods and beverages using all parts of the cacao fruit, which typically is discarded in cocoa production.

“Why grow this whole big fruit and just take the bean?” he said. “We consume a lot of cacao, so let’s use all of it.”

Months after the pandemic temporarily shuttered the shop and suspended expansion plans, the man once dubbed a “world-renowned Willy Wonka” launched Blue Stripes Urban Cacao, an online shop featuring packaged products inspired by popular menu items. Product development explores the potential of the three components of the fruit: the shell or husk, the fruity white pulp and the beans.

The shell may be ground into a gluten-free flour, featured in several baking mixes offered by Blue Stripes and in dishes at the shop such as pancakes, pastries and bread. The pulp is used for smoothies, bowls and shakes and may be dehydrated and consumed as a dried fruit snack. 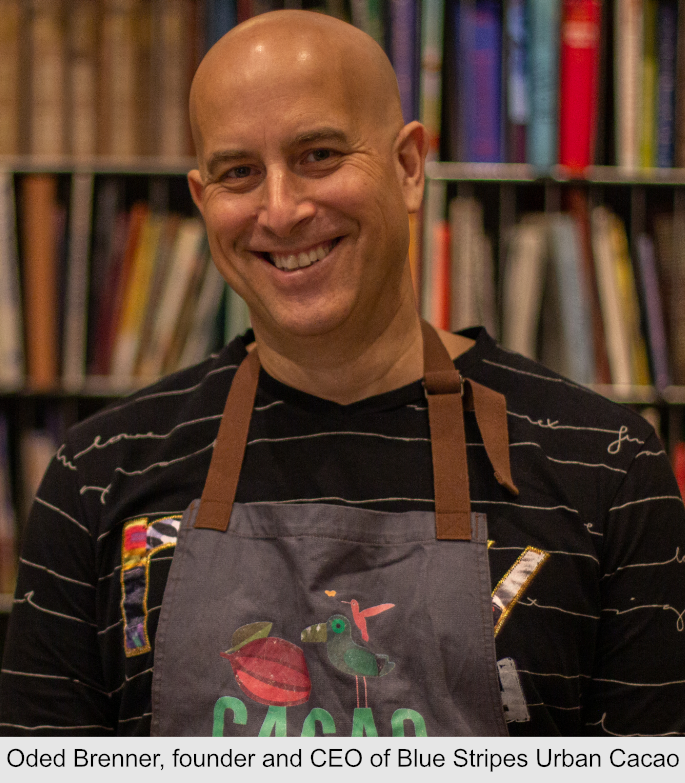 A line of cacao water made from cacao fruit contains no added sugar and is packaged in recycled plastic bottles shaped like a cacao pod. Flavors include original, chili lime cardamom and cascara cinnamon. The drinks, which are rich in antioxidants and electrolytes, recently landed on shelves in Erewhon and Whole Foods Market stores in Southern California.

Cacao espresso, featuring whole ground beans, may be brewed and prepared as a base for lattes, frappes or what Mr. Brenner called a “cacaoccino.” The product has antioxidants and theobromine, which promotes sustainable energy.

“The biggest complication is it’s a high fat content, not like the coffee bean, so it’s not easy to grind to a powder because it’s more like a peanut or almond; it turns into a paste,” Mr. Brenner said. “And then you get this very delicious beverage that has the entire cacao bean in it. It’s fantastic for people doing keto. But, in general, the flavors are very full and wild because we’re using whole bean.”

“They all came and experienced cacao in a way they never thought cacao could be, although they are using so much cacao in their business,” Mr. Brenner said. “To me, it was the first door to open an opportunity to influence big companies to be more sustainable. Not just to use the bean, which is only 30% of the fruit, but use the entire fruit.”

A Blue Stripes Cacao Shop recently opened in Nashville, Tenn., and another is set to open in Louisville, Ky., deals that were inked prior to the pandemic. Mr. Brenner hopes to continue opening more locations throughout the United States.

“The very optimistic way it looks now, people are starving for human interaction, for going out, for eating out,” Mr. Brenner said. “It seems like things are coming back in two, three months. Vaccination rates are high, and we can go back to normal. I would love to have cacao shops. I don’t know if it will be as planned in the beginning to have a huge chain, but I’m not such a long-term planner. I am more of a go-with-the-flow entrepreneur. I think a lot of entrepreneurs are like this. We plan, but the beauty of entrepreneurship is the flexibility.”

In the meantime, he will continue charting new courses for cacao.