We use cookies to provide you with a better experience. By continuing to browse the site you are agreeing to our use of cookies in accordance with our Cookie Policy.
Home » Startup creating a low-caffeine coffee market

LOS ANGELES — A low-caffeine coffee movement is quietly brewing in the United States, driven by millennials, who are the heaviest drinkers of the light stuff, according to the National Coffee Association. Startups such as Los Angeles-based Buzz Lite are creating a category for those who enjoy the taste, smell and ritual of coffee without the jitters or crash.

Not unlike the emergence of low- and no-alcohol craft beers and spirits in recent years, specialty no- or low-caffeine coffee taps into a desire, particularly among younger consumers, to limit intake of potent substances while partaking in the social benefits of consumption.

Buzz Lite debuted earlier this year with its signature Microdose Roast offering, available in whole-bean and ground formats, with 10% caffeine, or 20 mg, per serving. The concept was inspired by the popularity of microdosing psychedelic drugs, which is related to improved mood and creativity with fewer unpleasant side effects. The business began as a “pandemic project” by Andrew Cooper, a marketing professional with prior stints at Bonobos and WeWork, who several years ago began drinking decaf following an over-caffeination episode he compared to “a bad tequila night.”

Over the past few years, brands marketing coffee alternatives have awakened consumers to the potential cognitive and performance benefits of limiting caffeine. Examples include Mud\Wtr, featuring masala chai, cacao and mushrooms, with a fraction of the caffeine of a cup of coffee. Mellow Rooster is caffeine-free and contains an organic blend of roasted figs, chicory root, dandelion root, lemon and orange peels and carob. 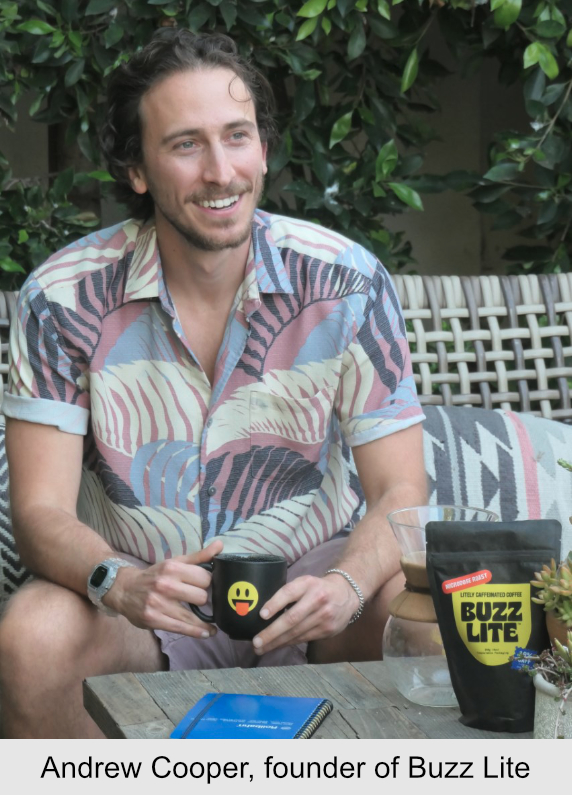 “I realized there’s no brand owning low caffeination and trying to make this something cool, something interesting,” Mr. Cooper said. “My background is all on brand and developing companies and messaging, and so it felt like an opportunity.”

Buzz Lite Microdose Roast features sustainably sourced Colombian beans packaged in compostable pouches. The company relies on a process using sugar cane to create an ethanol compound rather than a synthetic solvent to decaffeinate the beans, which Mr. Cooper said is “the tastiest and most natural way.” (Another widely touted technique among specialty coffee roasters is the Swiss Water Process, which removes caffeine without chemicals).

“There is a stigma around decaf,” he said. “There’s that ‘death before decaf’ saying and all these mantras around ‘hustle harder.’”

“I realized there’s no brand owning low caffeination and trying to make this something cool, something interesting.” — Andrew Cooper, Buzz Lite

“Our customers are current coffee drinkers,” Mr. Cooper said. “Sure, there are some people like me who are caffeine sensitive and do less caffeine all the time, but the majority are people who are drinking a full cup in the morning because they need that boost, but then they want something in the afternoon that’s going to leave them with sustained energy but not causing anxiety, jitters or losing sleep.”

Buzz Lite also has gained a following among medical professionals, athletes and new and expecting mothers, he said. While the product is only available online, at buzzlitecoffee.com, Mr. Cooper eventually plans to distribute to specialty shops, grocery stores and cafes. He may also test other formats, such as a low-caffeine ready-to-drink cold brew.

“I see this as a caffeine company in terms of finding the right dose for people,” he said. “Right now I like the concept of Microdose Roast and 10%, but there’s also different levels that could be better for people depending on who you are and the day and when you’re drinking it. So that’s also on the roadmap, too. What are those other levels we want to go after?”