We use cookies to provide you with a better experience. By continuing to browse the site you are agreeing to our use of cookies in accordance with our Cookie Policy.
Skip To Content
Home » Online, plant protein sales still surging a year into COVID-19

WASHINGTON — The impact of COVID-19 on consumer habits in relation to buying and eating foods and beverages has ebbed in several areas, but certainly not online ordering, according to the 2021 Food & Health Survey released May 19 by the International Food Information Council.

“After more than a year of tremendous upheaval caused by a historic pandemic, Americans are craving stability and a return to normalcy when it comes to their food decisions,” said Joseph Clayton, chief executive officer of Washington-based IFIC. “The 2021 Food & Health Survey reflects those desires, but it also provides evidence of trends from during and before the pandemic that are proving to be more durable.”

Greenwald Research, Washington, used Dynata’s consumer panel to conduct the study, which involved contacting 1,014 Americans of the ages 18 to 80 from March 23-31.

The survey found 72% said the pandemic has changed the way they eat and prepare food, which was down from 85% in April 2020.

The percentage of people who said they shop for groceries in a store at least once a week was 63%, the same as last year.

“The frequency of people going to the store hasn’t necessarily changed ... what’s changing is that more people are incorporating online shopping into the mix.” — Ali Webster, PhD, IFIC

“The frequency of people going to the store hasn’t necessarily changed,” said Ali Webster, PhD, director, research and nutrition communications at IFIC. “I think what’s changing is that more people are incorporating online shopping into the mix. We may not be doing as many multiple trips per week — you stop at the grocery store coming home from work to pick up a thing here and there.”

Now, consumers tend to shop in store once a week and then supplement it with online shopping, she said.

Interest in immunity, which accelerated during the pandemic, has continued. This year’s survey showed 66% said they were very interested or somewhat interested in immunity. The percentages were higher for consumers with incomes over $35,000 per year at 71% and parents with children under 18 at 74%.

“People are hungry for information in this area,” Dr. Webster said. “I think it’s a great opportunity to provide clear, science-based information on this. This is a very complicated topic and one with a lot of nuance.” 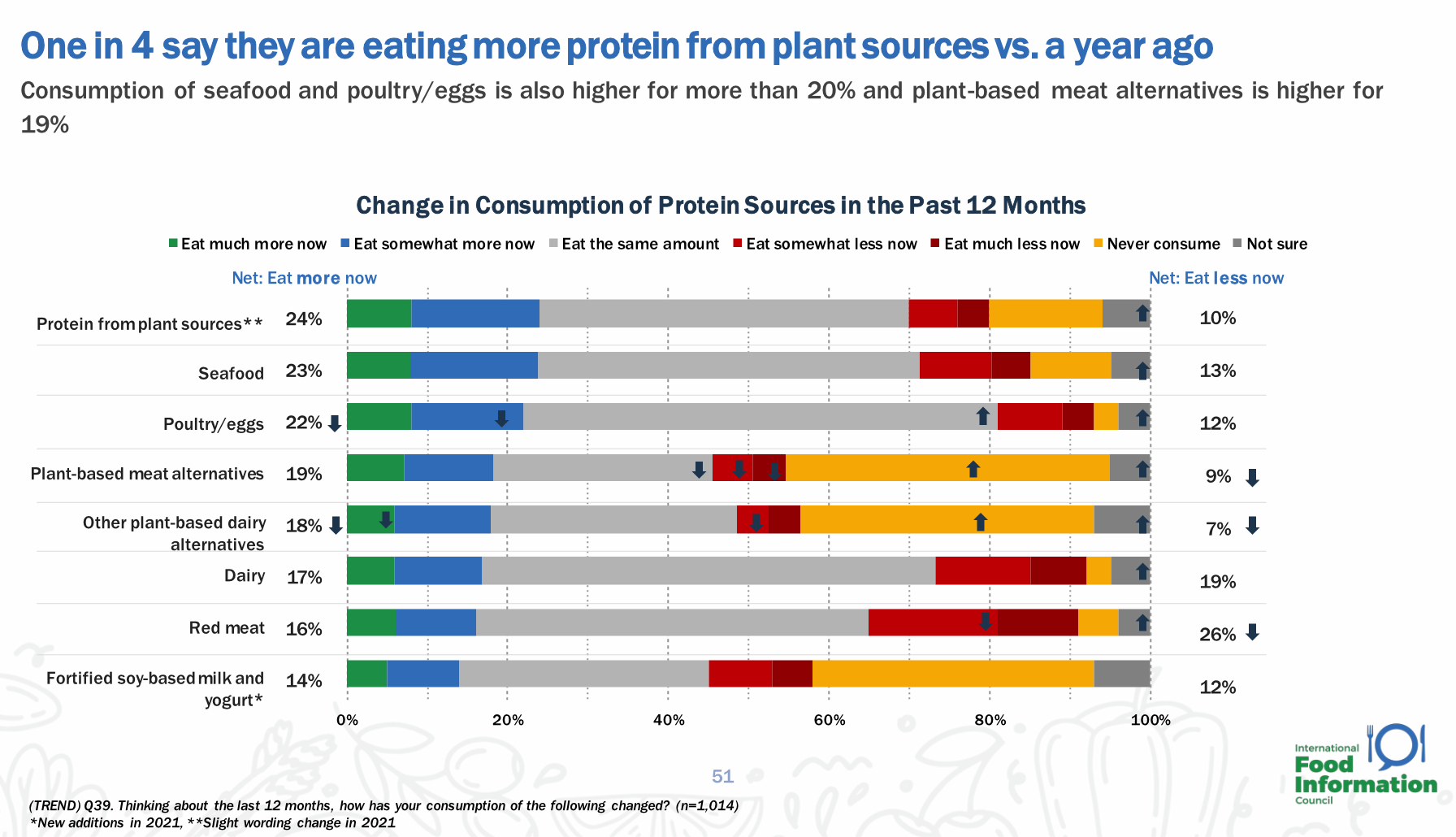 When asked what they were trying to consume more of, the top answer in 2021 was protein at over 60%, followed by fiber and vitamin D at about 55%. Whole grains and calcium also were over 50%.

Twenty-four percent said they were eating more protein from plant sources than a year ago. Other top answers were seafood at 23%, poultry/eggs at 22%, plant-based meat alternatives at 19% and plant-based dairy alternatives 18%.

The percentage of people limiting or avoiding sugars came in at 72%, the same percentage as last year but down from 80% in 2019. When asked what part of the Nutrition Facts Label influenced their purchasing decision the most, total sugars led at 25%, followed by total carbohydrates at just over 20%. Added sugars and dietary fiber were both at about 12%.

“People are much more willing to tolerate a longer ingredient list if they understand what those ingredients are.” — Ali Webster, PhD, IFIC

“People are much more willing to tolerate a longer ingredient list if they understand what those ingredients are,” Dr. Webster said.

When asked what items had the greatest negative impact on the environment, 24% ranked meat and poultry No. 1, the top answer and followed by bottled beverages at 14%.