BETHLEHEM, PA. — Michael Tierney’s quest to revamp a campfire classic began over a decade ago. Then a culinary school student in the twilight of his teens, he attended a backyard gathering where friends assembled and devoured s’mores.

“I was thinking, ‘Boy, I really don’t like smores,’” he recalled. “Why? For me, I never found traditional marshmallows to be all that compelling. The real killer for me was that the conventional way of making s’mores always left you with chocolate that never melted. It never looked like the advertisements.”

He ripped open a marshmallow, tucked a piece of milk chocolate inside, and roasted it over the flames. The resulting treat, which “melted from the inside out,” sparked the inspiration for Stuffed Puffs, already a multimillion-dollar brand beginning its third year on retail shelves. 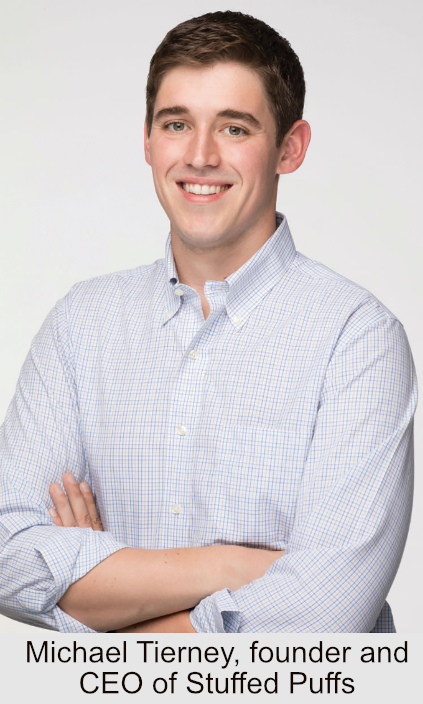 In the years prior to launching the business, Mr. Tierney had a brief career in fine dining, preparing extravagant dishes at Michelin-star restaurants. Meanwhile, the filled marshmallow concept continued to crackle in the back of his brain. In 2012, he paused to pursue his spin on the s’mores staple, whipping up prototypes and cobbling a makeshift manufacturing operation in his mother’s basement.

“I kind of taught myself engineering by virtue of trying to fill a marshmallow,” he said. “I thought, this will be real easy. I can find an equipment supplier who can do this, and I can find a co-packer because that’s what every brand does these days.”

Meetings with manufacturers produced the same incredulous reactions: “You don’t think we thought of this?” A top executive at a leading candy company told him, “We’ve spent millions trying to do this. It’s impossible.”

He shifted his attention to a different endeavor, launching gluten-free baked foods brand Mikey’s in 2014. Today, Mikey’s products are sold in 10,000 stores and include English muffins, tortillas, pizza crust and handhelds formulated with simple, nutritious ingredients such as almond flour, cauliflower and eggs.

“Rich saw what I saw in Stuffed Puffs, and he also had the access to capital and previous successes to make it a reality,” Mr. Tierney said. “He and the team at Factory got behind this and funded our first manufacturing facility, which we built in Wisconsin, outside of Milwaukee.”

Within a year, the brand outgrew its production plant in Wisconsin, and the company broke ground on a 150,000-square-foot facility near Bethlehem, a $30 million project bankrolled by Factory. The new space has capacity for four high-speed, customized lines that can manufacture up to $500 million of product, said Mr. Tierney, the 31-year-old chief executive officer of both Mikey’s and Stuffed Puffs businesses. (A Factory-led management team at Mikey’s runs day-to-day operations there, but Mr. Tierney is involved in product development and business strategy).

The possibilities for Stuffed Puffs are “kind of boundless,” he said, describing marshmallows with non-chocolate fillings or inclusions or coatings or various shapes and colors. Mr. Tierney also sees opportunity in the nutraceutical segment.

“We can do non-critical-dose vitamins or supplements or cannabis, depending on how that market evolves, in a dosing format that is really unique,” he said.

The company may also experiment with allergen-free or organic formulations.

“To me, this isn’t just about s’mores,” Mr. Tierney said. “This is a technology platform.”