Recent research suggests consumer concern about sustainability has intensified in the wake of the pandemic. A Euromonitor International study released earlier this year found many consumers no longer view businesses as purely profit-driven entities and expect companies to engage in social and environmental issues.

“Businesses need to connect with consumers to build their trust and gain their loyalty,” said Maria Coronado Robles, sustainability insights manager at Euromonitor International. “To do that, it’s important to give them the facts. Businesses are finding new ways to engage ethical consumers by measuring and communicating their carbon footprint, for example.”

Companies of all sizes are pledging to reduce the impact of agriculture, food production and distribution on the environment. Emerging brands are pioneering practices that create a positive impact on the earth.

A snack with impact

Prior to founding the business, Kaitlin Mogentale had observed a friend juicing a carrot and questioned the fate of the fiber-rich remnants. A self-described food waste warrior, Ms. Mogentale began calling local juice shops and learned many lacked the capacity or resources to use the leftover pulp.

“In the United States we waste 35% of our food supply, and most of that is actually fresh fruits and vegetables,” Ms. Mogentale said, noting that rotting food waste emits methane, a greenhouse gas contributing to climate change.

She said only 10% of Americans eat the daily recommended servings of fruits, vegetables and fiber, according to the US Department of Agriculture. She set out to create a solution that tackles both challenges.

Pulp Chips are formulated with the vegetable excess from juice processing, plus other plant-based ingredients such as chia seeds, cassava and lucuma fruit. The snacks also incorporate okara, a byproduct of manufacturing soy milk and tofu.

The upcycled food movement is gaining momentum behind consumers’ mounting environmental concerns. Pulp Pantry is one of dozens of emerging brands developing food and beverage products using underutilized or overlooked ingredients traditionally destined for the dump. Earlier this year, a new certification mark debuted to provide consumers with guidance about the presence of upcycled food ingredients in a range of products, including food and beverages, pet food, dietary supplements and more. Research showed more than 50% of consumers had increased intent to buy Upcycled Certified food when the mark was on packaging.

A recent study published in the journal Food and Nutrition Sciences found just 10% of consumers are familiar with upcycled food products. Once educated about upcycled foods, however, 80% said they would seek those products.

“Food waste accounts for 6% of all human-caused greenhouse gases,” said Turner Wyatt, co-founder and chief executive officer of the Upcycled Food Association. “Mitigating it counts as the single-most productive thing people can do to dial back climate change. In addition, businesses around the world lose $1 trillion a year to food waste. This seal and the certification program backing it will simultaneously help solve the food-waste problem while saving businesses money. It also nurtures the creation of new businesses revolving around upcycled foods. Everybody wins.”

Pulp Pantry partners with juice companies Suja and Evolution Fresh to repurpose remnants of celery, cucumbers, kale, and other fruits and vegetables. The company may also source cores, peels, stems and damaged or unfit produce from vegetable processors. Oftentimes, suppliers pay for the waste to be removed, Ms. Mogentale said.

“We have new sourcing partnerships that will be leveraging the 30,000 lbs-plus of waste coming out of salad plants each day — mostly due to cosmetic rejections,” she said.

Future product launches from Pulp Pantry may include ready-to-eat cereal, granola and other grocery staples.

“When you think about what Pulp Pantry could become, it’s more about innovation in every category and how we can make fruits, vegetables and fiber more accessible for every American in the pantry staples they have on a weekly basis,” Ms. Mogentale said. “We’re really excited to tackle more innovation in upcycled foods as well as fruit- and vegetable-based nutrition.”

“We’re seeing some of our strongest sales months these past few,” Ms. Mogentale said. “Excited to keep the momentum rolling with field marketing and demos opening back up.” 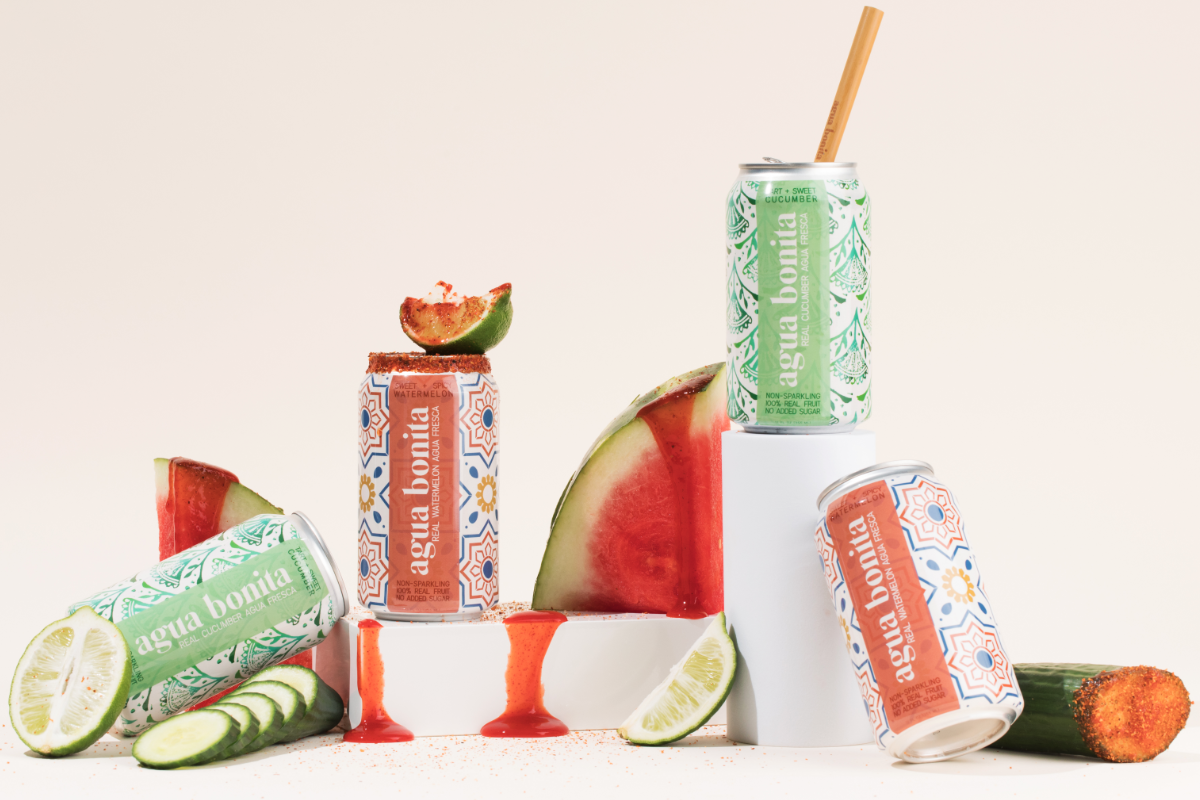 “When life gives you lemons, make aguas frescas.” It became a rallying cry for Kayla Castañeda and Erin PonTell, who launched beverage startup Agua Bonita during the past year.

Previously the pair worked at a juice company that was crushed by the pandemic and promptly pursued a new venture, reimagining a cultural staple in a convenient, sustainable and healthier way.

Agua Bonita offers a twist on the traditional Mexican refreshment aguas frescas, flavored waters typically formulated with sugar and primarily available in fountain drink form. The brand’s canned still beverages contain no sweeteners and are flavored with juice from imperfect or excess watermelon, pineapple and, yes, lemons that would otherwise be wasted.

“We’ve taken those lemons and in five months have turned them into sales of over $40,000 a month with zero dollars in marketing spend,” Ms. Castañeda said during the Natural Products Expo West Virtual Week pitch slam competition in late May, where Agua Bonita was named a rising star. “We’re experiencing explosive growth because of our passionate and valuable consumers welcoming us into their homes.”

Ms. Castañeda, who earlier held a market development manager role at the Coca-Cola Co., drew inspiration from her grandfather, a farm worker often hauling overripe fruit from the fields “because he couldn’t stand to let them go to waste,” she said. Though unfit for grocery stores, the fruit created a delicious base for aquas frescas served at family gatherings, she said.

“He taught us that every piece of produce was valuable whether it made its way to the market or not,” she said.

Aguas frescas have grown meaningfully on menus over the past decade, last year launching in Chipotle Mexican Grill restaurants nationwide. Agua Bonita fills a gap in the market, as a lower-calorie quencher with no additives, Ms. Castañeda said.

“While drinks in other categories are made with either artificial ingredients or have upwards of 79 grams of sugar per serving, we sit right in the middle as an all-natural option that consumers can grab,” she said.

The products are available at the brand’s website, drinkaguabonita.com, and in more than 1,000 retail stores throughout California and Texas. The founders are forecasting revenues to reach $8 million in 2022 and $17 million in 2023. And with new flavors, including mango jalapeño and strawberry cantaloupe, in the pipeline, the business is on track to rescue 14 million lbs of produce by 2023.

Earlier this year, the brand’s anti-waste aspirations caught the attention of the Kroger supermarket chain. Agua Bonita was among 10 startups selected to receive a total of $2.5 million in seed grant funding through the Kroger Co. Zero Hunger Zero Waste Foundation Innovation Fund.

“Agua Bonita is not just for Hispanic consumers,” Ms. Castañeda said. “It’s for any consumer wanting a great culinary experience without any junk.” 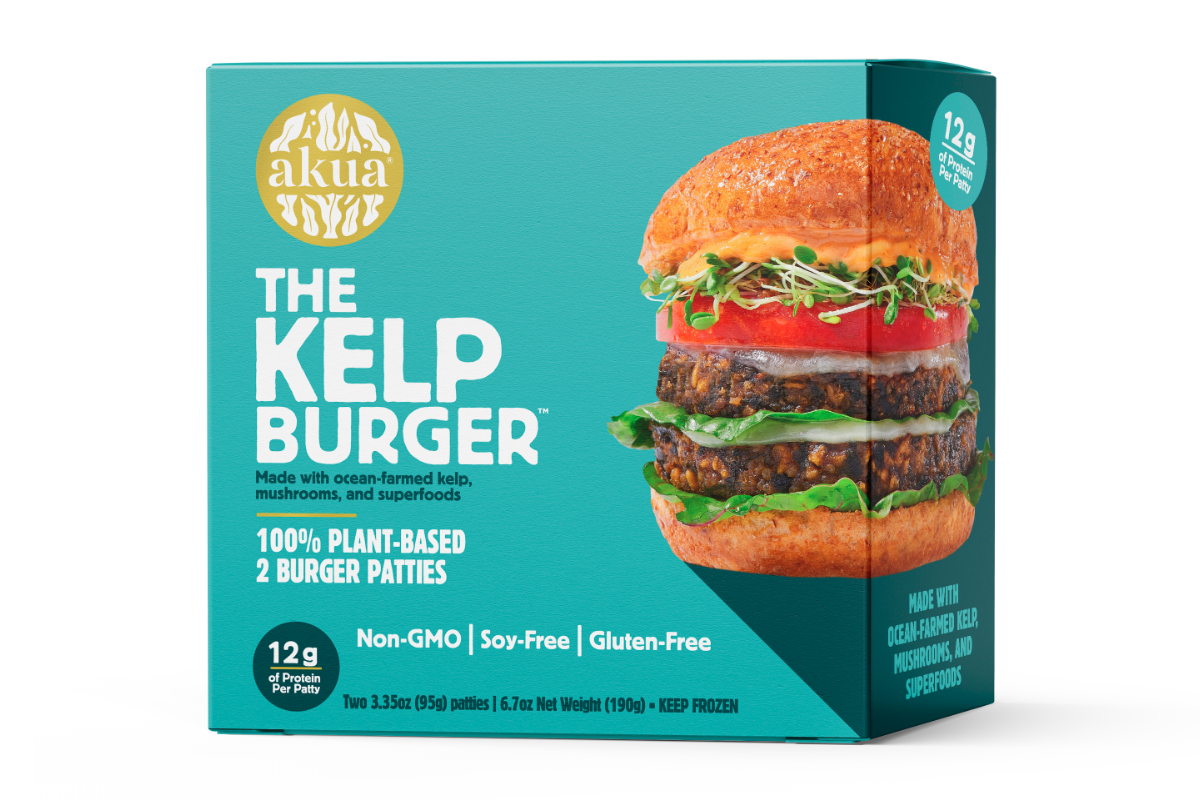 In the crusade against climate change, kelp can help. Algae may play a key role in sustainably nourishing the growing global population while reversing some of the impacts of animal agriculture, according to a maker of meat alternatives based on seaweed.

Akua recently raised more than $1 million in an equity crowdfunding campaign to launch its kelp burger, formulated with regeneratively grown sugar kelp, crimini mushrooms, pea protein, black beans, quinoa and chickpea flour. The frozen patties have a “toasty, umami flavor” and no “fishy taste,” according to the company.

Akua sources its sea greens from woman-owned ocean farms along the Northeast coast. The zero-input crop requires no freshwater, fertilizer or dry land to grow, and it filters carbon and nitrogen from the water. A brown macroalgae, kelp is packed with vitamins and minerals including zinc, calcium, folate, potassium and iron. Additionally, kelp farming is providing more income for seafood workers, Ms. Boyd Myers said.

The kelp burger joins a lineup of kelp noodles and kelp jerky. The latter, which contains shiitake mushrooms, pea protein and apple cider vinegar, was named an “invention of the year” for sustainability in Time Magazine and credited as a “world-changing idea” by Fast Company. However, Ms. Boyd Myers admitted the product lacks mainstream appeal.

“It’s a health food product,” she said. “With the burger we’ve been able to nail all of that and create something super delicious that everybody loves. So, in many ways, our company is in a full pivot to focus on the kelp burger, and it’s already been a much bigger success than the jerky ever was.”

In the coming years, the company plans to launch additional products such as kelp nuggets, kelp sausages, kelp crab cakes, kelp balls and more, sold online, in retail stores and through foodservice. Near term, Akua is promoting “the summer of the kelp burger,” hosting events where people can safely gather and sample the brand’s latest launch.

“The reason these products are so much more exciting than jerky is because I get to bring people around a table or a barbecue and talk about this idea of food sustainability and systemic change in food,” Ms. Boyd Myers said.