We use cookies to provide you with a better experience. By continuing to browse the site you are agreeing to our use of cookies in accordance with our Cookie Policy.
Home » General Mills unveils new snack brand

MINNEAPOLIS — General Mills, Inc. is introducing Good Measure, a new brand of snacks aimed at consumers who are concerned about how food interacts with their blood sugar, including those with diabetes and prediabetes.

Good Measure is launching with two products — Creamy Nut Butter Bars and Crunchy Almond Crisps — that are sweetened with allulose. The bars feature a blend of nuts, nut butters, seeds and either dark chocolate or blueberries and come in blueberry almond, peanut dark chocolate and almond dark chocolate varieties. The almond crisps come in sriracha and cheddar flavors. The snacks contain fewer than 5 net carbs and 3 grams of sugar per serving.

“Nearly one in six adults in the US have already been diagnosed with prediabetes or diabetes,” said Jonathan Scearcy, co-founder of Good Measure. “And the US Centers for Disease Control and Prevention estimates one in two adults actually have prediabetes or diabetes, but most don’t know it yet. Ninety-five percent are not happy with current offerings, in particular snacks, so we have the potential to positively impact the lives of millions of people out there who are struggling to find good food options.”

Good Measure started when co-founders Ryan Backer and Tom Nack met a mother who had a 10-year-old daughter with Type 1 diabetes. 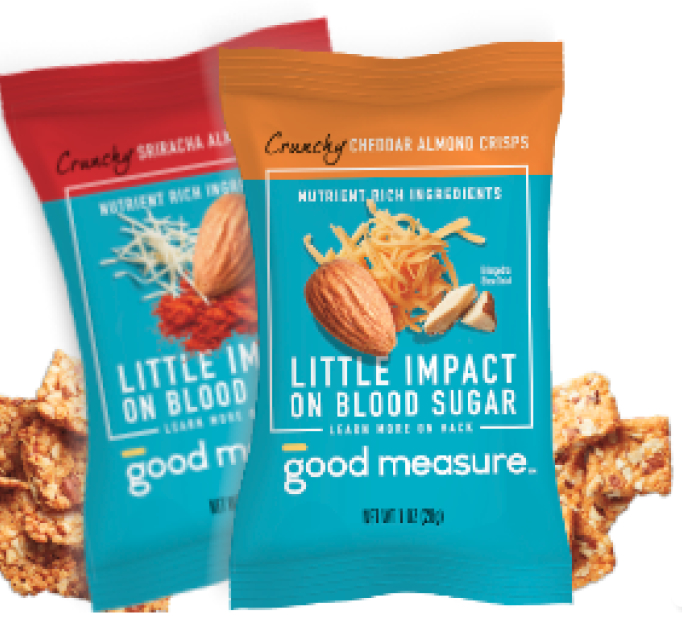 “We were out looking for the biggest consumer problems we could find, and that’s when we met Melissa,” Mr. Nack said. “When she walked us through her kitchen and showed us the scale she had to use to weigh an apple and then the book she needed to look up that apple to understand how much insulin to dose her daughter … it really pulled on our heartstrings. We realized we needed to come up with a solution to this problem.”

The two approached Mr. Scearcy with the story of Melissa and her daughter Mia, and the trio began to brainstorm what kind of products would help families like this. They asked Mia and other diabetic consumers what foods they wished they could eat that they ate before, and one of the biggest asks was for bars and other snack formats, Mr. Scearcy said.

“When you really care about the food you’re putting into your body and how it impacts your blood sugar, there are a handful of categories that really start to become off limits for people,” Mr. Scearcy said. “So that was our mission — how do we reinvent those so they’re on-limits again but actually genuinely good for them and also things they really enjoy? This is all about sustainable behavior change, so without making things they want to eat over and over again, we’re really not serving them the way that we want to.”

Mr. Backer added, “We needed to seek out nutrient-rich ingredients that would have little impact on blood sugar and combine them in a unique way where it would still be delicious. Because the problem is, oftentimes there are lower-carb, lower-sugar solutions on the marketplace that look like they 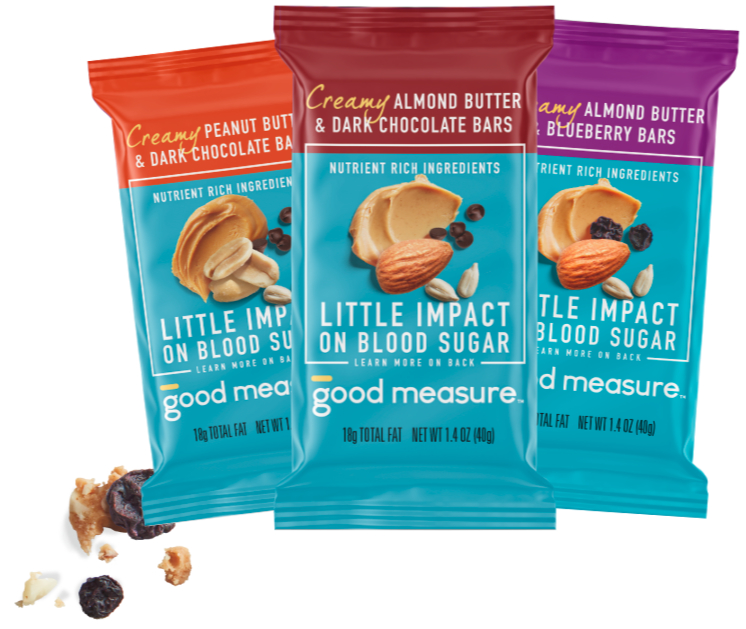 may be a great solution, but they aren’t. But we also didn’t want there to be a taste trade off. We wanted people to still have a positive relationship with food. And still we wanted food to bring them joy.”

The team worked for two years with dietitians, diabetic counselors and formulation experts before landing on the final recipes for their bars and almond crisps.

“We started to create snacks that were held together by ingredients that wouldn’t spike blood sugar and also taste great,” Mr. Nack said. “This new take on food has led us to file for patents on both of our product lines. I’ve worked in the food industry for almost 15 years, and this is the first time I have ever worked on a problem that I could see the massive impact it was having on the consumers we were helping.”

Good Measure products are available in Hy-Vee stores in Minnesota and on the company's website. The products will be coming to Amazon soon.