We use cookies to provide you with a better experience. By continuing to browse the site you are agreeing to our use of cookies in accordance with our Cookie Policy.
Home » Microscopic salt grains aid in sodium reduction

WEST PALM BEACH, FLA. — MicroSalt is on a mission to help food manufacturers reduce sodium without compromising on taste.

Launched in 2019, the company has developed a patented process for reducing salt particle sizes from 200 to 500 microns to less than 2 microns. The microscopic particles taste 20% saltier than typical salt crystals, allowing manufacturers to reduce sodium levels by up to 50%.

The powder-like ingredient is created by dissolving salt in water, adding a carrier such as maltodextrin or gum arabic and then rapidly drying the solution. The tiny particles are better at sticking to surfaces, cover more surface area and dissolve on the tongue quicker than larger salt crystals, said Victor Manzanilla, chief executive officer of MicroSalt.

“Let’s say you’re eating one of those pretzels that have big chunks of salt,” he said. “You only perceive the surface that is touching your tongue, so you eat 60% to 80% of the salt without it dissolving and without tasting it. That’s an extreme example, but it happens in every food that you eat.”

MicroSalt is ideal for dry-surface topical applications, such as chips, popcorn, crackers, nuts and pretzels, he said. 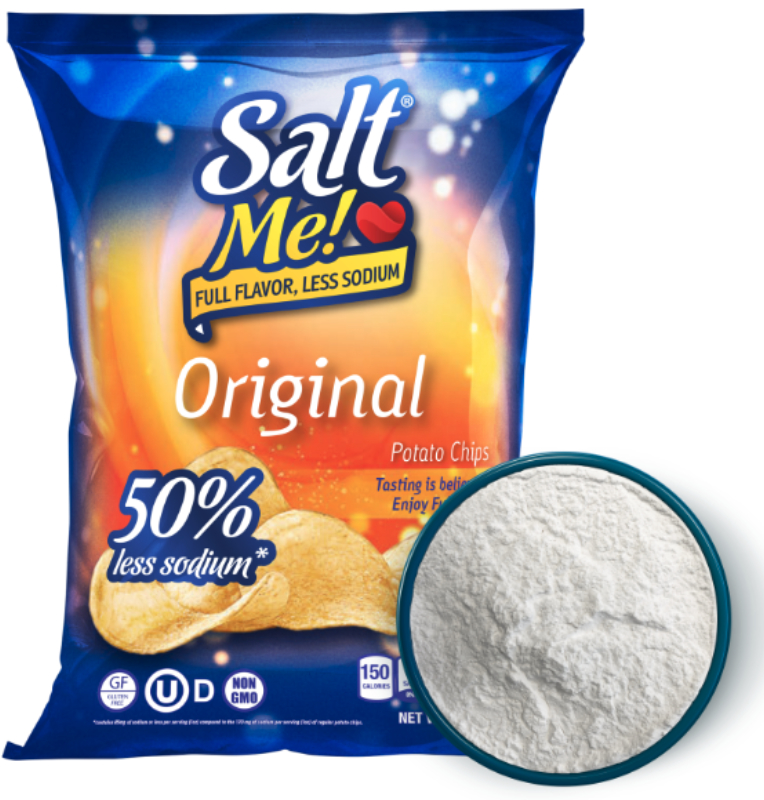 The company last year launched its own line of SaltMe branded potato chips as a proof of concept. Featuring 50% less sodium than typical potato chips, the chips are available in cheddar and sour cream, sour cream and onion, barbecue and original flavors. They are sold on Amazon an in natural food stores throughout the Northeast and Texas.

“MicroSalt’s sale cycle is very long, because companies take a long time to change an ingredient in their snacks,” Mr. Manzanilla said. “We needed something for potential clients to actually try and really see the power of the technology in that very moment.”

The company also felt there was a void in the snack market for a full-flavored, low-sodium solution.

“Every low-sodium solution we saw was just a line extension of the main brand, so they had the image that they were low-flavor and not as good as the original,” Mr. Manzanilla said. “We don’t want to create a snack that tastes better, and we didn’t want a snack that is unique. Our message is that we taste exactly like the brand you use today, but with 50% less sodium. That’s why we chose regular flavors.”

The SaltMe chips are a small part of the business, and MicroSalt primarily is focused on selling its sodium reduction solution to snack food manufacturers, he added. Several customers already are using MicroSalt in products such as almonds and tortilla chips.

The company also is developing MicroSalt for home consumption and is working with the government and non-profit organizations to drive awareness and generate demand.

“We’re doing an effort with the FDA, the American Heart Association and a bunch of other organizations so that they know MicroSalt exists,” Mr. Manzanilla said. “One of the big push backs they get from the industry is, ‘We can’t reduce sodium because it is going to damage our business.’ The truth is that you can.”

Suppliers Snacks Sodium Health and Wellness
Subscribe to Our Newsletters