We use cookies to provide you with a better experience. By continuing to browse the site you are agreeing to our use of cookies in accordance with our Cookie Policy.
Home » How sweet it is

How sweet it is

ARLINGTON, VA. — The last meal they had shared was a homemade ice cream cookie cake to celebrate Isabella’s second birthday. Thereasa Black, a Naval officer, whipped up the treat for her toddler prior to departing for a deployment in Djibouti.

When Ms. Black returned just over a year later, Isabella while in a cousin’s care had acquired a sweet tooth, the result of well-meaning family showering her with candy, ice cream and Popsicles. A licensed attorney, Ms. Black decided to forgo a law career (“The idea of coming back from deployment and working 80-hour weeks made me want to cry,” she said) and launched a dessert business offering healthier options her daughter could enjoy. 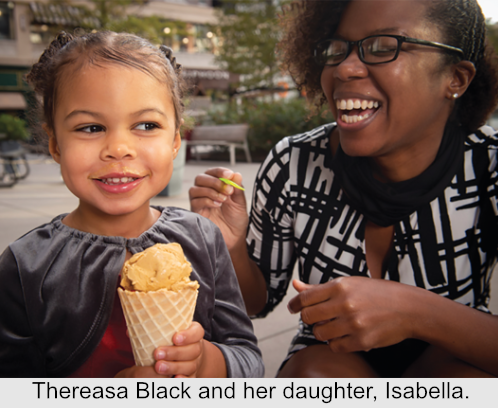 The company, initially named Amore Congelato, specialized in gelato and sorbet sweetened with dates, coconut sugar and agave syrup. The frozen desserts were a hit at a Washington-area farmers’ market, so Ms. Black opened a retail shop in Arlington, Va., just months before the coronavirus raged through the nation.

“We actually made it through COVID perfectly fine,” Ms. Black said. “We were profitable. But we wanted to focus more on grocery.”

She closed the shop this past March and shifted her focus to chocolate bars, which are less expensive to ship to online shoppers.

“We were already making chocolate for the gelato, so I said, ‘Let’s see if people love the chocolate by itself,’” she said.

She renamed the business Bon AppéSweet and began selling her bars in May. The brand offers six varieties, each featuring organic ingredients, including cacao, cocoa butter and dates. The Golden Chocolate bar, Ms. Black’s take on white chocolate, contains cocoa butter, coconut milk, vanilla beans and dates. The Better Than Milk Chocolate bar, which has only cacao, coconut butter and dates, is formulated to taste like milk chocolate. All products are vegan and fair trade.

“We put it in a small grocery store here in DC, and it was outselling the leaders in the category,” Ms. Black said. “Isabella loves the chocolate. Before, she couldn’t eat chocolate because she is allergic to soy,” which is used as an emulsifier in many chocolate products.

The packaging for each bar of Bon AppéSweet chocolate, and earlier each pint of gelato, bears a fact about social justice as part of Ms. Black’s mission to advance awareness about inequality.

“When I first went to law school, I was set to be the next Thurgood Marshall,” she said. “I wanted to change the country for the better and make things more equal for more people. When I decided to not go back into law, I still wanted to fight for these things. This is deep down in me.”

Last year she was awarded a $10,000 grant and mentorship through Stacy’s Rise Project, a program established by PepsiCo’s Frito-Lay North America business unit to support female entrepreneurs. The cohort focused on Black female founders, who receive less than a percentage of venture capital funding each year and often face systemic barriers to accessing resources required to scale a business. Bon AppéSweet also was selected to receive support from The Empower Project, a consortium of nine firms led by C.A. Fortune aiming to elevate Black-owned consumer products startups.

The marketplace has an appetite for healthier chocolate, a trend underscored by recent transactions. The Hershey Co. in June acquired Lily’s, a brand of stevia-sweetened chocolate, in a transaction valued at $425 million. Mondelez International, Inc. earlier this year purchased Hu, a maker of organic chocolate formulated with coconut sugar.

Over time, Ms. Black plans to expand into other categories, including chocolate truffles, baking chips and chocolate syrup. She also is considering pies and perhaps an eventual return to gelato.

“The gelato was selling really well,” Ms. Black said. "We pivoted away from it because it doesn't travel well.”