STAMFORD, CONN. — A calculated risk in early 2020 helped Saffron Road capitalize on heightened demand for global flavors during the pandemic.

The American Halal Co., Inc. subsidiary, which manufactures frozen foods, meal pouches, sauces and snacks inspired by global cuisine, received an early warning about the impending pandemic in late 2019. Several team members had relatives and China, and one of them expressed concerns about Wuhan.

“She warned us that what we were hearing in the media wasn’t what was happening on the ground, so our team decided to triple our inventories,” said Adnan Durrani, founder and chief executive officer of Saffron Road. “When COVID hit, we were flushed with 300% inventories.”

With frozen meal solutions flying off shelves during the pandemic, Saffron Road ended 2020 with 47% year-over-year growth on its core product line. Nearly 30% of that growth came from new customers. 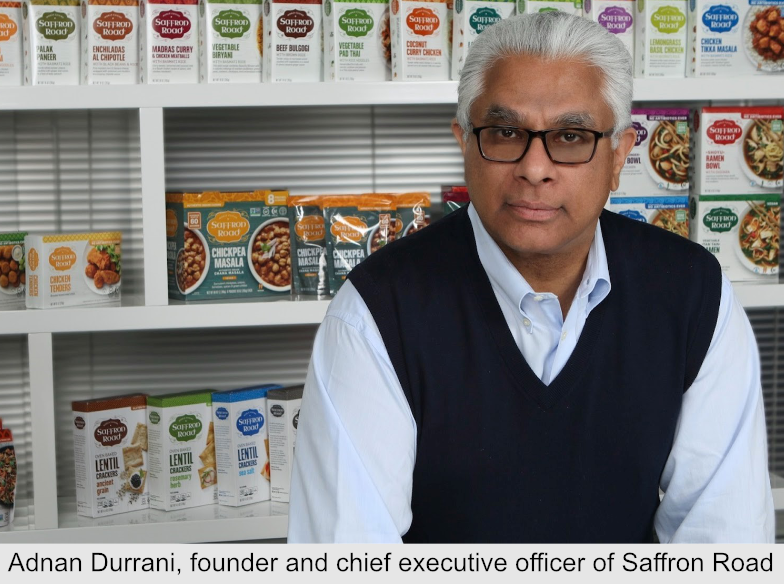 “We saw a lot of growth from consumers who had never heard about our brand before, but by default were buying it because our competitors were out of stock,” Mr. Durrani said.

Consumers’ sense of wanderlust during lockdown also drove sales, he added. A panel study conducted by Saffron Road earlier this year found a significant portion of its growth is coming from taking share from other frozen brands, but not from other world cuisine brands.

“Consumers switched from some of those Americana brands to world cuisines, and they’re not going back,” Mr. Durrani said.

“The Asian area still has a lot of innovation to go,” he said. “Korean food is a really great area that we were in too early, so we’re looking at relaunching there. We’re also playing with Vietnamese and seeing what's available there.”

For Saffron Road, the key to successful innovation is balancing authenticity with scalability. New products must honor a region’s culture while also having broad appeal.

“It’s not just putting a stamp on something and calling it Mexican or Indian,” Mr. Durrani said. “We’re thinking about what those regions celebrate and what the deep traditions of those cuisines are. We also learned early on that we might start at Whole Foods, but we need to make sure from day one that it can scale in conventional.”

He cited the company’s launch into Mexican foods as an example.

“We didn't just do a taco like everyone else does,” he said. “We figured that Mexican food has been dumbed down enough, so we launched a pocket enchilada using real poblano peppers, nixtamal corn and Oaxaca cheese.”

Another part of the company’s strategy is looking at trends that are moving into the mainstream and incorporating them into international fare. As an example, its No. 2 SKU is a chicken pad Thai made with gluten-free noodles.

New products in Saffron Road’s pipeline tap into the plant-based trend, including its first handheld offering. The company is developing an artisan wrap made with lavash, a thin Mediterranean bread.

“We didn’t want a thick burrito or a thick naan filled with rice and other fillers,” Mr. Durrani said. “If we’re going to do a wrap, it not only has to be authentic but also healthy and clean.”

“Most plant-based proteins are actually very highly processed protein isolates,” he said. “We have a number of vegan and vegetarian products that trended during COVID, so we thought, ‘Let’s do a wrap, but let’s do it with whole plant-based protein made from real chickpeas and not just the isolates.’”